Fenerbahçe one win away from Final Four 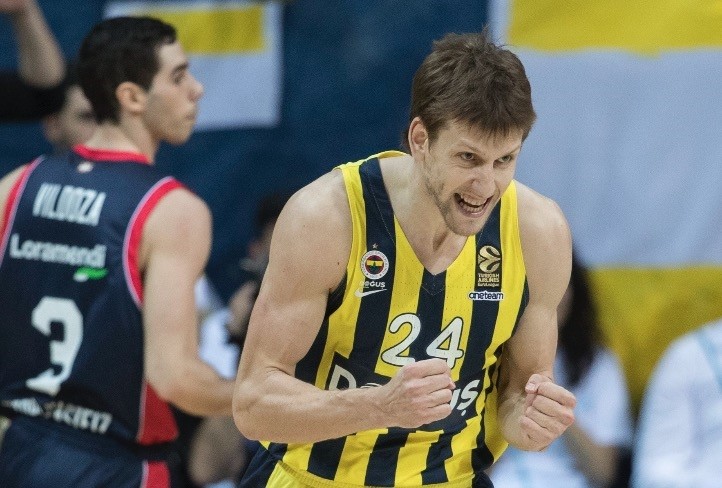 Reigning champion Fenerbahçe is just one win away from booking a Final Four berth, but Baskonia will be desperate to keep it waiting by holding home court today

Turkish Airlines EuroLeague Playoffs return to action today with the first two Game 3s of the best-of-five playoff series, which will be followed by two more Wednesday.

This time, the teams that placed fifth through eighth in the regular season standings get the opportunity to play in front of their home crowds.

For Baskonia Vitoria today and Khimki Moscow Region, these are must-win games to avoid respective sweeps against Fenerbahçe Doğuş and CSKA Moscow.

Real Madrid and Zalgiris Kaunas, which each won on the road last week to steal the home-court advantage in their respective series, will now try to protect it against Panathinaikos Superfoods and Olympiacos.

Reigning champ Fenerbahçe is just one win away from booking a Final Four berth, but Baskonia will be desperate to keep it waiting by holding home court on Tuesday.

Baskonia has competed well in the series so far but urgently needs to improve its rebounding after averaging just 24.5 boards – the lowest of all playoffs teams – in the first two games.

Jan Vesely, with seven rebounds per game in the playoffs so far, will have other ideas about that. Fenerbahçe has leaned upon a pair of outstanding performances in the backcourt, with Kostas Sloukas delivering 11 assists in Game 1 and Bradley Wanamaker top-scoring with 19 points two days later.

Baskonia will turn to Toko Shengelia and Rodrigue as it tries to save its season. Coach Zeljko Obradovic's team already won at the Fernando Buesa Arena in the regular season – ending a long list of heavy losses in Vitoria – and Baskonia will have to play at its best to keep this series alive.

Also today, Zalgiris Kaunas hosts Olympiacos. Expect a blood and thunder affair at Zalgirio Arena as the host attempts to maintain its home-court advantage against resurgent Olympiacos in a tied series that has all the makings of a playoff classic.

After the Lithuanian champs triumphed in Game 1, the Reds roared back on Friday with a dominant defensive performance and plenty of offensive help from Jamel McLean, who compensated for the loss of injured Nikola Milutinov by scoring 21 points on 8-of-12 two-point shooting.

Olympiacos has two key players – Georgios Printezis and Kostas Papanikolaou – regaining rhythm after injury absences, but will face a stern test from a Zalgiris team that has an 11-4 home record this season.

Brandon Davies has been outstanding so far in the playoffs with an average of 20.5 points, while Kevin Pangos will be looking to bounce back from a rare quiet night after being held to just five points – his lowest since December – in Game 2.

On Wednesday, Khimki Moscow will meet its city rival CSKA Moscow. The all-Moscow battle heads a few kilometers up the Leningradka highway as Khimki welcomes CSKA knowing that a home victory is imperative to keep its season alive.

In Wednesday's other game, Real Madrid will host Panathinaikos Superfoods. After recovering from a shocking performance in Game 1 to grab hold of home-court advantage by winning with great determination in Athens two days later, Madrid will now look to maintain its momentum as this high-powered series heads to the Spanish capital.