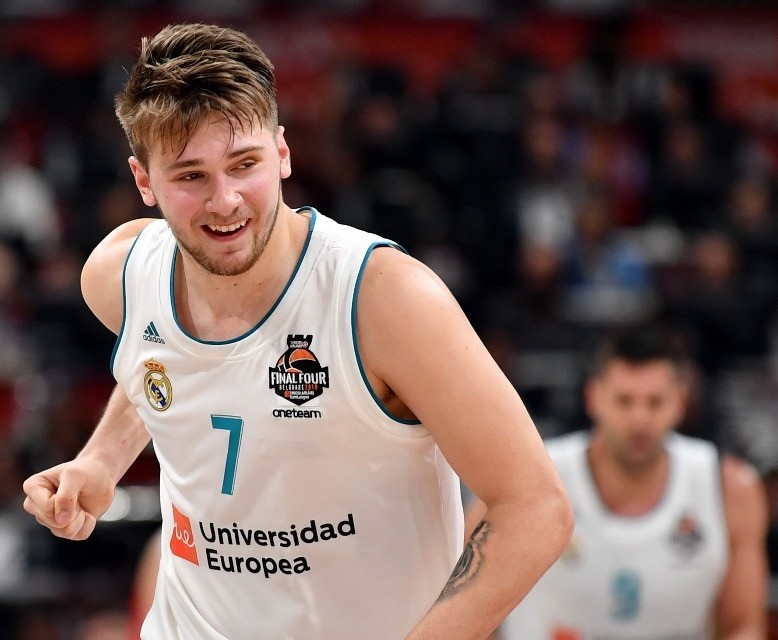 Real Madridu2019s Slovenian star Luka Doncic reacts to a play during his teamu2019s second match against CSKA Moscow in the EuroLeague semifinals at The Stark Arena in Belgrade, May 18.
by daily sabah
May 21, 2018 12:00 am

Luka Doncic, the youngest player ever to march his team to a Final Four is now the youngest to become the Turkish Airlines EuroLeague MVP.

Doncic, who turned 19 on Feb. 28, was voted by the fans and media as the best player this season after leading Real Madrid through a minefield of injuries all the way to Sunday's championship game against Fenerbahçe Doğuş.

The third-year pro from Slovenia was the competition's leader in performance index rating (PIR) from late October onwards and takes a league-high average PIR of 21.69 into Sunday's title game.

While last season's MVP, his teammate Sergio Llull, sat out eight months with a knee injury, Doncic took the reins and led Madrid to a 4-0 start and a share of first place as he was named the EuroLeague's youngest-ever MVP for the Month of October.

Doncic delivered the goods on a regular basis and enters Sunday's championship game ranked fourth with 16.1 points on average, thanks to having scored in double figures in 27 of his 32 appearances.

Earlier this month, EuroLeague head coaches made him the Rising Star Trophy winner for a second straight year, while fans and media voted him to the All-EuroLeague First Team, the first teenager so honored.

After a season in which he inspired superlatives from start to finish, the so-called "boy wonder" has now added the biggest individual award, that of EuroLeague MVP, even as he keeps battling to get biggest team prize of them all for the first time – the EuroLeague champions trophy.

Doncic becomes the 13th different player to become MVP since the current end-of-season awards format was introduced in 2005. He is the first EuroLeague MVP from Slovenia, which he left to join Real Madrid as a 13-year-old.

He dominated the junior ranks with Madrid until he became champion and MVP of the Euroleague Basketball Adidas Next Generation Tournament in 2015, the same year that the club won the EuroLeague title. He joined Madrid's senior team later that year. Now in his third pro season, Doncic follows Llull to give Madrid the first back-to-back MVPs from the same team since Theodoros Papaloukas and Ramunas Siskauskas of CSKA Moscow in 2007 and 2008, respectively.

Anthony Parker of Maccabi Tel Aviv won the award in its first two seasons, 2005 and 2006.