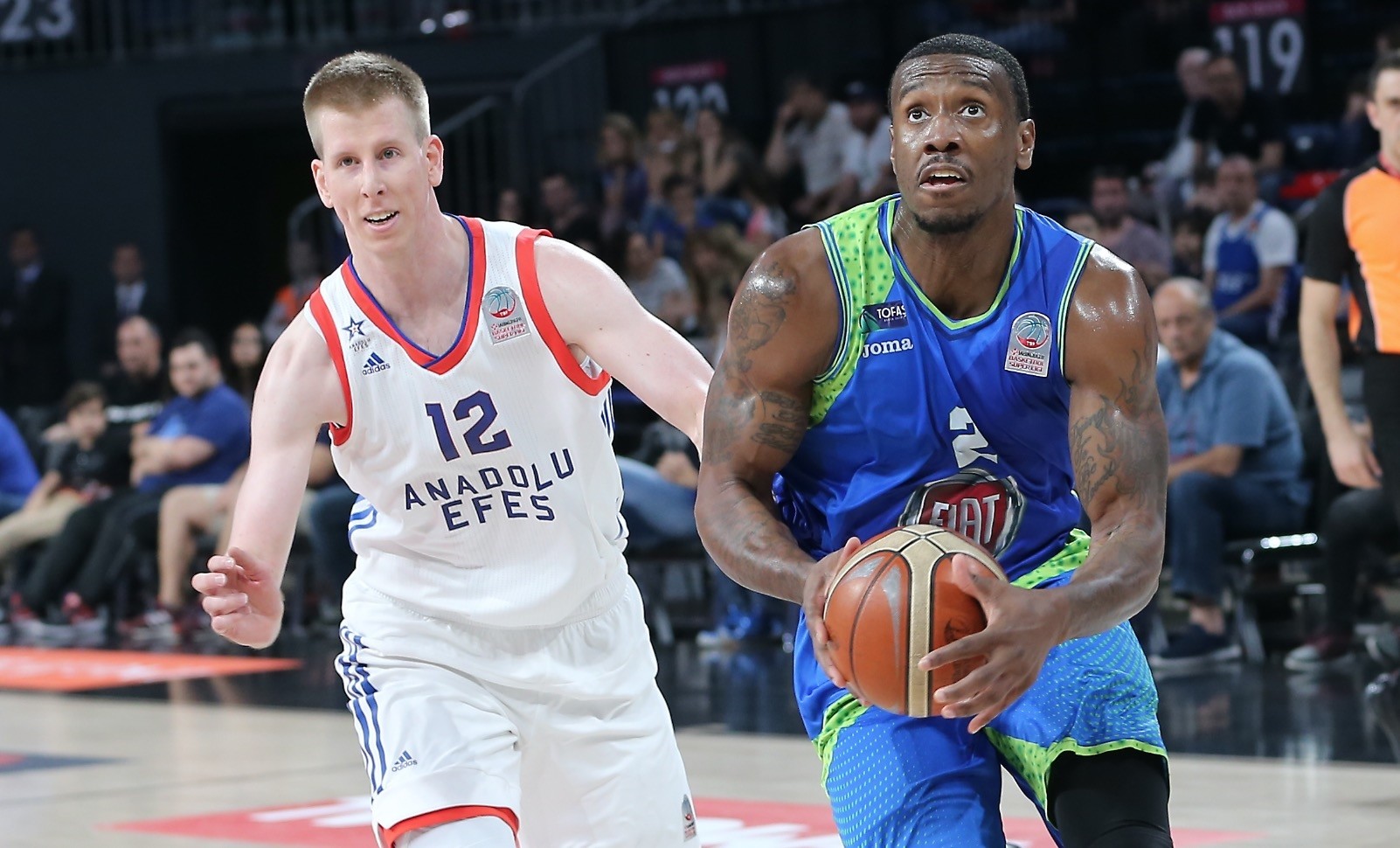 Anadolu Efesu2019 Brock Motum and TOFAu015eu2019s Raymar Morgan vie for ball in the Turkish basketball league semifinals on Saturday.
by Daily Sabah with AA Jun 04, 2018 12:00 am

TOFAŞ eliminated Anadolu Efes 3-1 in the Turkish basketball league semifinals on Saturday evening, advancing to the finals. The Bursa club defeated the Anadolu Efes 76-70 at Sinan Erdem Dome in Istanbul to close out the series in the fourth match.

Four players scored 67 out of 76 points for TOFAŞ. TOFAŞ led from the first minutes and controlled entire game increasing their lead in each quarter.

Worth mentioning was a great performance by American power forward Raymar Morgan (203-88, college: Michigan St.) who helped win the game with his 22 points and 9 rebounds. The other American import point guard Pierria Henry (193-93, college: Charlotte) added 21 points, 5 rebounds, 4 assists and 5 steals during the contest.

At the losing side American-Armenian center Bryant Dunston (203-86) responded with a double-double by scoring 14 points and 11 rebounds and international point guard Doğuş Balbay (185-89, college: Texas) scored 12 points, 5 rebounds and 5 assists. Both teams had four players each who scored in double figures.

Speaking to reporters after the match, TOFAŞ head coach and Turkish basketball legend Orhun Ene said, "We are tired but happy. We are in the finals after a long time."

TOFAŞ advanced to Turkish basketball league finals for the first time in 18 years, when they won the league. The then-champion team featured players like Mehmet Okur, David Rivers, Rashard Griffith and Asim Pars. TOFAŞ will meet Fenerbahçe Doğuş in the finals.

Fenerbahçe advanced into finals after they edged Banvit on the road and swept the semifinal series. Fenerbahçe dominated down low during the game scoring 58 of its points in the paint compared to Banvit's 30. It was a quality performance for American guard Brad Wanamaker (193-89, college: Pittsburgh) who led the winners and scored 16 points and 4 assists. Czech power forward Jan Vesely (213-90) accounted for 14 points and 4 assists for the winning side. Polish power forward Damian Kulig (205-87, agency: BeoBasket) came up with 28 points and Canadian-American guard Andrew Rautins (193-86, college: Syracuse) added 11 points and 6 assists respectively for Banvit in the defeat.

Both teams had four players each who scored in double figures. Both coaches used bench players which allowed the starters a little rest for the next games.