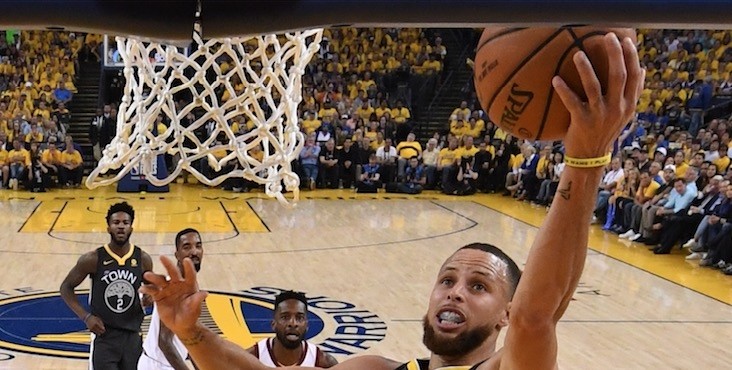 Golden State sharpshooter Stephen Curry delivered a performance for the ages Sunday with an NBA Finals record nine 3-pointers powering the defending champion Warriors over LeBron James and the Cleveland Cavaliers.
by Jun 05, 2018 12:00 am

For the third straight year, the Cleveland Cavaliers have lost the first two games of the NBA Finals to the Golden State Warriors. They will be at home for Game 3 in a must-win situation

LeBron James and the Cleveland Cavaliers are in the familiar position of heading home in a 2-0 hole in the NBA Finals against the Golden State Warriors.

After nearly stealing the opener, the Cavaliers looked out of synch at both ends in Sunday's 122-103 loss and now face the specter of having to defeat the defending champions four times in the next five games. For perspective, Golden State has lost four of five once in the last four seasons.

"We want to continue to be uncomfortable," James said. "This is the last team in the world you want to relax against."

Are the Cavs cooked? Not necessarily. But some things have to change, quickly and dramatically.

The change of venue should help; the Cavs have won eight straight home games since losing their postseason opener to Indiana. In Game Three last year, Cleveland held a six-point lead with less than three minutes remaining but didn't score again.

"We have a Game Three to play," James said. "We have an opportunity to go home. We've played some really good basketball at home but that shouldn't give us any comfort."

Playing at Quicken Loans Arena should also help Cleveland's role players, who have been anywhere from inconsistent to non-existent. JR Smith, whose mental mistake cost the Cavs a chance to win Game One, has made just 5-of-19 shots. Jeff Green has made 5-of-16. Kyle Korver has made 1-of-6.

"Anything we run for [Korver], they switch out and deny, take it away," Cavs coach Ty Lue said. "Jeff [Green] could be more assertive."

Lue said he and his staff will look at game tape to "see what's hurting us." Two things that stand out are Golden State attacking George Hill and the effectiveness of its role players.

The Warriors use pick-and-rolls to get bigger, slower defenders on Stephen Curry and force Hill to guard big men. The Cavs could start the bigger Korver and have Smith guard Curry, but that would give James even more ballhandling duties.

And Golden State is tough enough to defend without Shaun Livingston scoring 20 points on 9-of-9 shooting through two games and JaVale McGee adding 12 on 6-of-6 shooting in a surprise start Sunday.

"When you try to take away Klay (Thompson), Steph and (Kevin) Durant, someone else is gonna be open," Lue said. "We're helping off those guys, so they're gonna be open. But we've gotta take away the easy shots."

The Cavs know that no NBA team has ever come back from a 3-0 deficit to win a playoff series, so they should be appropriately desperate for Game Three on Wednesday. The Warriors expect nothing less.

"I think because we've been here several times, I won't need to say much," Warriors coach Steve Kerr said. "The guys in the locker room already know that. They know how hard it's gonna be in Cleveland."