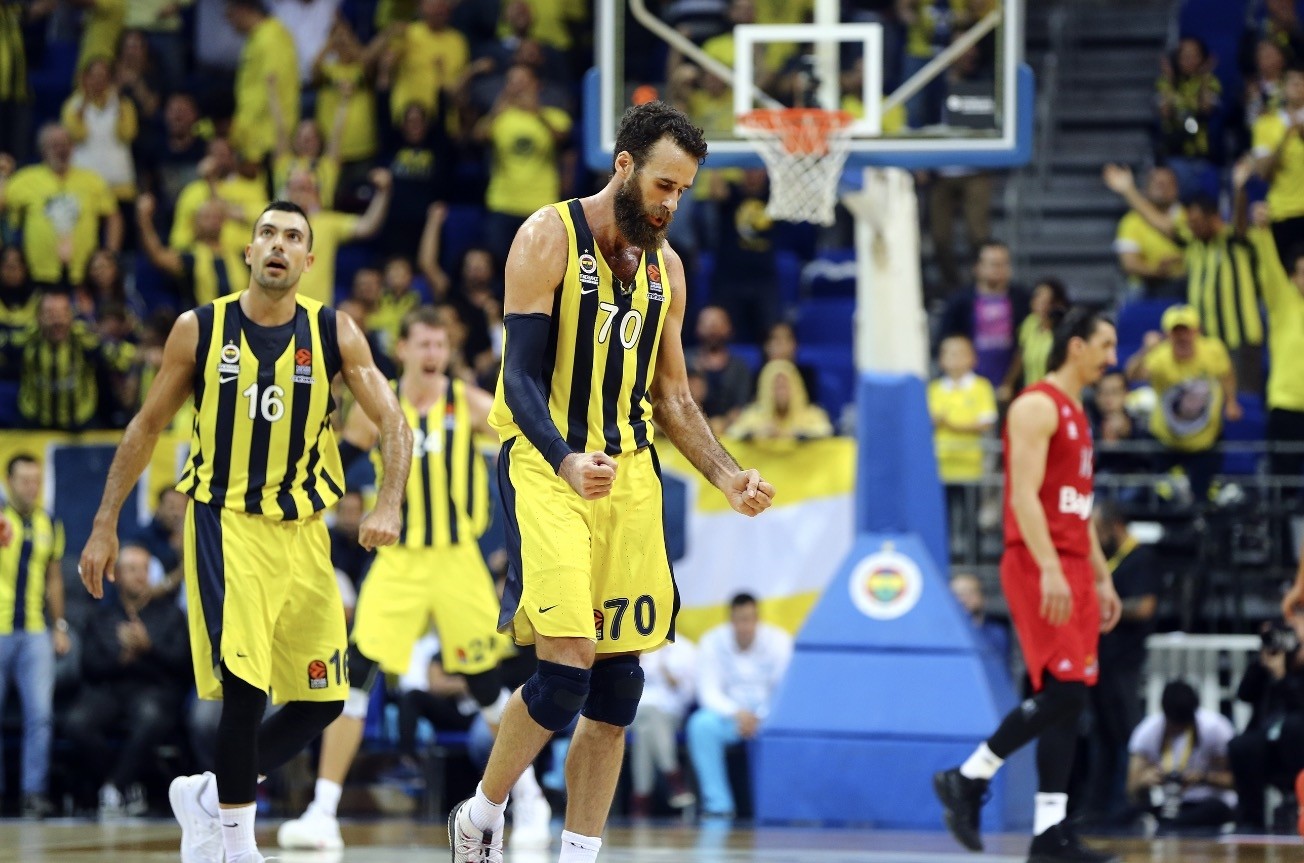 Fenerbahçe will be hosted by Spanish rival Saski Baskonia in the EuroLeague Round 6 today. After a win against Bayern last week, the Yellow Canaries are looking to stay among the top-ranked teams in the standings

Two teams in different situations meet each other today as 2019 Final Four host Saski Baskonia welcomes Fenerbahçe in Round 6. The host was back to its winning ways in Round 5 after three losses in a row, thanks to a win over Darüşşafaka behind 13 points and six rebounds by Toko Shengelia. Fenerbahçe also won again against Bayern Munich with 19 points by Luigi Datome. Baskonia will try to turn its last win into a streak after a struggling start to the season, while the guests aim to stay among the top-ranked teams in the standings. Shengelia and Jan Vesely are the two main driving forces on their respective teams, and both will meet again for a thrilling battle in the paint. Shengelia leads Baskonia with 14.2 points, 5.0 rebounds, 1.2 assists and 1.2 steals per game. Vesely is also the best man for Fener with 16.2 points, 6.2 boards, 3.2 assists and 1.2 steals. Both teams rely on these men to lead them to victory and certainly, they will be under the spotlight.

Fenerbahçe boasts the second best performance index rating (PIR) average in the competition (112.0 per game) and that speaks volumes about how this team performs. Its only loss so far arrived at a local derby, so despite the hiccups, the guest looks solid and must stick to its game plan. Vesely, Kostas Sloukas and Luigi Datome lead a steady pack in which everybody can, and in fact do, contribute. The team is also the holder of the second-best offense in the league (88.6 points per game) so the trip to Baskonia can be a good chance to improve those numbers even more.

Meanwhile, a battle to climb on the standings will take place tonight in Russia when Khimki (1-4) hosts Barcelona (3-2) in Round 6. Khimki comes off its first win of the season last week against Gran Canaria with 24 points and 7 assists by Alexey Shved. Barcelona also had a solid home win against Maccabi with 14 points and seven rebounds by Victor Claver. Both teams seem to be on the rise and they will want to stay on the winning path for another round. Barca leads their head-to-head record with a 2-4 edge so far. Barcelona has managed to win three straight games for the first time in a long while and will want to extend that streak for sure. Mentally, the team seems to be finding its place and that is the first step to success.

Khimki is the second weakest team in the league in rebounds (27.6 rebounds per game) and the guest will have to exploit that with Tomic, Chris Singleton and Pierre Oriola at the front. However, Khimki's excellent 58.4 percent in two-point shots – second best in the league – will be a major threat for the guests if they do not excel in defense.

Elsewhere, the first Greek derby of the season is here and a whole basketball country will stop and watch. Ioannis Papapetrou (8.4 ppg) will play his first derby as a Panathinaikos player after five seasons with Olympiacos. All eyes will be on Panathinaikos leaders Nick Calathes 10.6 points per game (ppg), 9 averages per game (apg) and James Gist (7 ppg). As always, Olympiacos arrives at this game with a core of players that has literally been in dozens of Greek derbies, led by Vassilis Spanoulis (10.8 ppg, 6.2 apg) and Georgios Printezis (11.2 ppg). Expect a great atmosphere at the Olympic Sports Center in Athens.

Finally, Buducnost is the only team still looking for its first win and will try to do so in front of its fans. Alen Omic has been the Montenegrin powerhouse's top scorer (11.2 ppg) until now, followed by Earl Clark (10 ppg) and Edwin Jackson (9.8 ppg). Zalgiris is undefeated on the road, with big wins against Efes and Panathinaikos. Nate Wolters (15.4 ppg, 5.2 apg) has been its main pillar until now but Brandon Davies (13.4 ppg) and Paulius Jankunas (8.6 ppg) have been solid around the baskets, too. Both teams meet for the first time since in the 2002-03 season. Back then, Buducnost and Zalgiris split home wins. In the game in Podgorica, Buducnost needed overtime to beat Zalgiris 106-102 behind 27 points from John Brown.