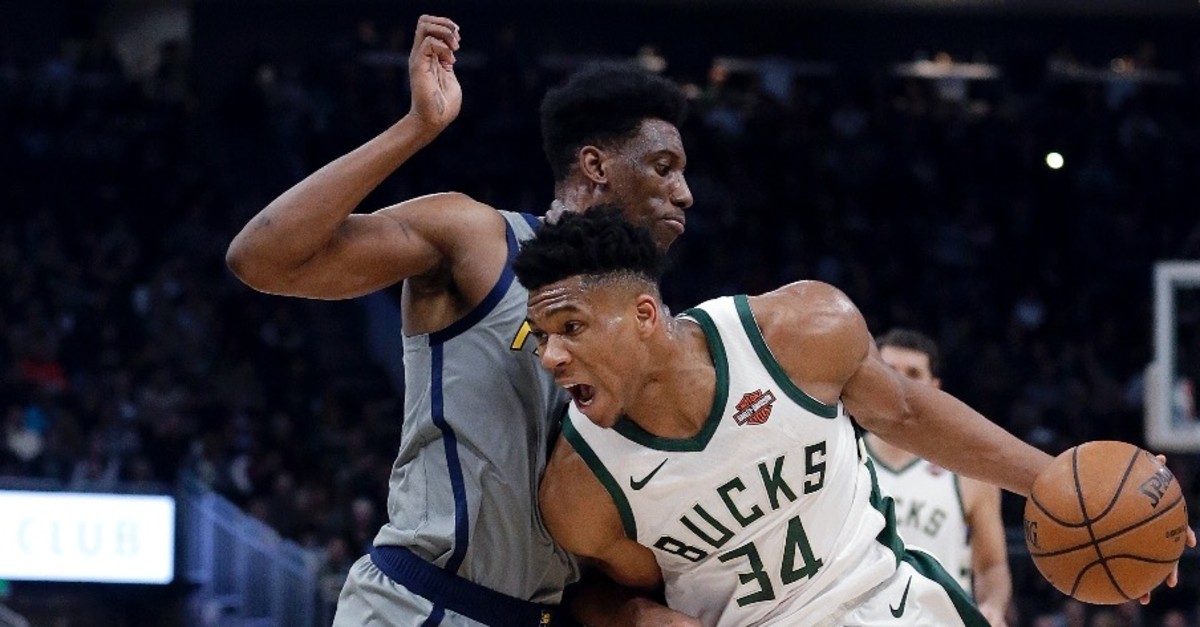 The Bucks trailed by as many as 14 in the second quarter but exploded for 39 third-quarter points to take the lead before increasing their advantage to as many as 18 in the fourth quarter.

The Bucks became the first team in the league to reach the 50-win plateau. They are now 27-5 at home. They have won two straight and nine of their past 11.

Towns, who left in the final minute of regulation and did not play in overtime, reached the 40-point plateau for the third time in five games. The two-time All-Star fell just shy of his season high of 42 points. He will undergo further testing on his knee, but coach Ryan Saunders said he has not heard reason for serious concern.

Derrick Rose scored 16 of his 29 points after the third quarter for the Timberwolves, who have won two of three. Taj Gibson had 15 points and 13 rebounds.

Kyrie Irving scored 30 points, Marcus Smart and Marcus Morris added 16 each, and visiting Boston extending its winning streak to three with a win over Los Angeles.

Gordon Hayward added 15 points as the Celtics avenged a defeat to the Lakers at home in February when former Boston point guard Rajon Rondo hit a game-winning shot at the buzzer.

LeBron James finished with a triple-double (30 points, 12 assists, 10 rebounds) for the Lakers, who were playing without a number of key contributors because of injuries. Los Angeles lost its fifth consecutive game and fell for the seventh time in its last eight games.

D'Angelo Russell hit a go-ahead 3-pointer with 1:39 remaining, and Brooklyn held off host Atlanta to complete a season-series sweep despite a triple-double performance by rookie Trae Young.

Spencer Dinwiddie had 23 points and Jarrett Allen finished with 20 points and 12 rebounds for the Nets, who had beaten the Hawks twice in Brooklyn earlier in the three-game season series.

Young's triple-double consisted of 23 points, 10 rebounds and 11 assists. John Collins had 33 points and 20 rebounds for Atlanta, which dropped its second straight.

De'Aaron Fox scored a game-high 30 points and hit the go-ahead basket with 5:03 to play as visiting Sacramento beat New York.

The Kings overcame a 15-point first quarter deficit and survived squandering an 11-point lead in the fourth quarter to win the opener of a pivotal four-game Eastern Conference road trip. Sacramento, which hasn't made the playoffs since 2006, entered Saturday four games behind the San Antonio Spurs in the race for the eighth and final playoff spot in the Western Conference.

Buddy Hield scored 19 points, and Nemanja Bjelica had a double-double (13 points, 10 rebounds) for the Kings.

CJ McCollum scored 26 points on 11-for-14 shooting as Portland pulled out a victory over visiting Phoenix.

Seth Curry came off the bench to match his season high with 22 points for the Trail Blazers, who ended their two-game losing streak. Damian Lillard added 18 points and nine assists, and Jusuf Nurkic contributed 14 points and nine rebounds for Portland.

Devin Booker scored 23 points and DeAndre Ayton collected 21 points and eight boards for the Suns, who had won three in a row. Kelly Oubre had 17 points and seven rebounds for Phoenix.