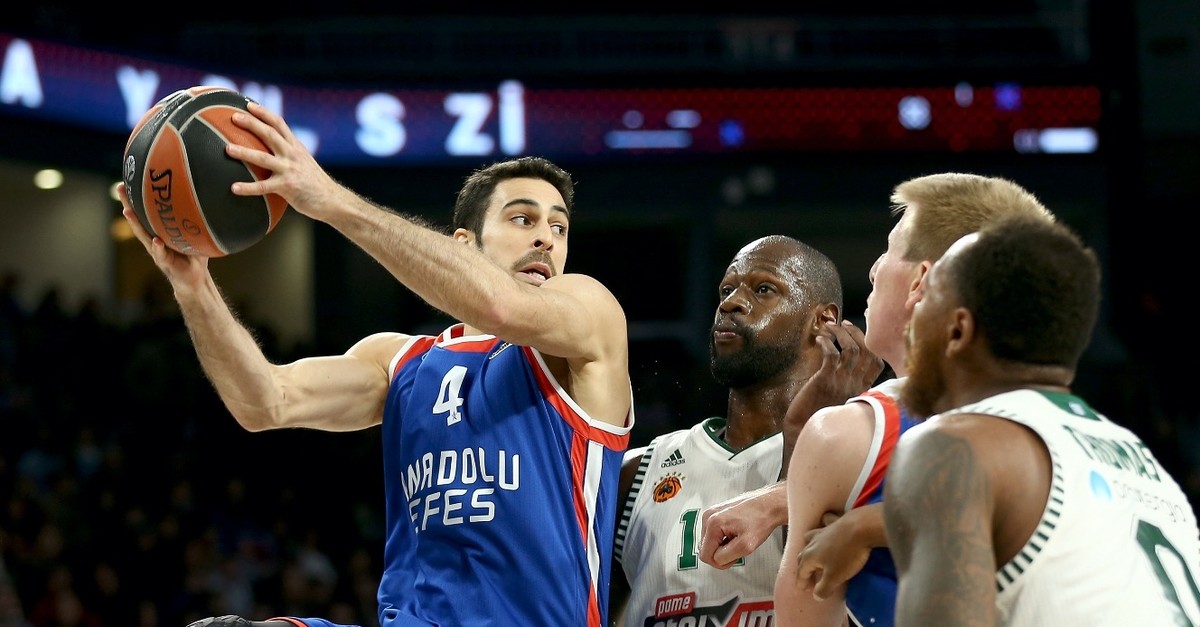 Round 26 of the Turkish Airlines EuroLeague starts today as league leader Fenerbahçe hosts Barcelona, which is trying to retain the fifth spot

With only five rounds to go, Round 26 of the Turkish Airlines EuroLeague kicks off today, bringing together the biggest names in European basketball.

The latest round opens as teams vie to get playoff spots and boost their points while trying to avoid any losses that would severely impact their standings.

The game to watch will naturally be the one between league leader Fenerbahçe Beko and fifth-placed Barcelona Lassa. Fenerbahçe has home court advantage in Friday's game and like its Spanish rival, seeks to recover from losses it suffered in recent weeks. The Turkish team boasts 21 wins, one more than second-placed CSKA Moscow, while Barcelona has 15 wins and 10 losses so far this season. Fenerbahçe, meanwhile, would look to restore its reputation after a humiliating defeat against Barcelona's compatriot Real Madrid. The Madrid loss last week, where Fenerbahçe conceded more than 100 points was devastating for the Turkish side's legendary coach Zeljko Obradovic, who saw such a crushing loss for the first time in his career. Fenerbahçe may be comfortable at home against Barcelona but the Spanish side is desperate to secure a victory to clinch the fourth spot from Anadolu Efes. Efes had proved a challenge for Barcelona after last week's loss in the EuroLeague. Barcelona will head to the end of the season with three home games and an away match after the Fenerbahçe challenge and will count on this advantage. Nevertheless, Anadolu Efes has the head-to-head tiebreak advantage. Another great challenge for the Spanish side is the impenetrable defense of Fenerbahçe and tackling an offensive style.

Anadolu Efes will face Maccabi Fox Tel Aviv in today's away game. Fresh off a victory against Barcelona, the Turkish side wants to maintain the momentum and seeks qualification for the next stage against Israeli side which languishes in the ninth spot with 12 wins and 13 defeats. Maccabi's playoff ambition and a likely nothing-to-lose attitude in the home game can challenge Anadolu Efes. Israeli side also holds the top title in its local league and a critical victory against FC Bayern Munich, which stands head-to-head with Maccabi. Add this run of seven home triumphs in its Menora Mivtachim Arena, the Israeli side can even crush the victory hopes of the Turkish outfit. Anadolu Efes, on the other hand, can rise to the occasion and will flaunt last round's MVP, Shane Larkin. The point guard delivered the league's highest-scoring individual performance in six years with 37 points in Round 25 and will be an obstacle difficult to overcome for Maccabi.

In other games, CSKA Moscow hosts Panathinaikos of Greece, a tenth-place rival that has to raise its expectations or bow to the Russian side which aims for an eighth straight win, to equalize with Fenerbahçe. Panathinaikos relies on coach Rick Pitino whose first game against CSKA in Round 15 ended with a 96-84 home victory.

Six teams are one win away for the sixth place, currently held by KIROLBET Baskonia Vitoria-Gateiz, and two of them will take on each other today. Milan will host Olympiacos to break their tie in 13 wins and 12 losses. The Greek side that reached the Final Four in the last seven seasons, has been struggling at times this season but a Round 25 victory against Buducnost Voli Podgorica fired them up. Milan, for its part, relies on an offense led by Mike James.