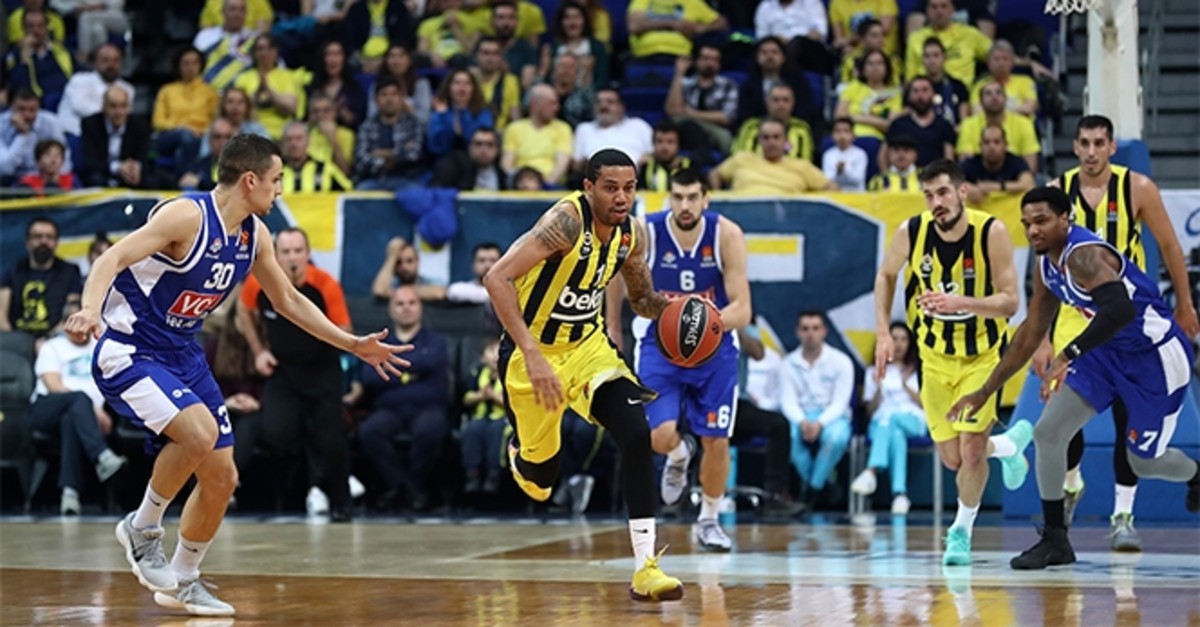 Round 29 of the Turkish Airlines EuroLeague opens today as league leader Fenerbahçe faces Italy's Olimpia Milano. The Turkish side will be hoping for a win to secure the top seed with just a few weeks left for the playoffs

Stakes are high as Round 29 of the Turkish Airlines EuroLeague starts today. Fenerbahçe will travel to Italy to take on Olimpia Milano and it would want to add more to its one-point lead over second-placed CSKA Moscow to secure the top spot.

Boasting 23 wins, Fenerbahçe has only two games left as the regular season draws to an end and the playoffs get underway. Milan is eighth with 14 wins and is fighting for a playoff spot. The Turkish side is on a hot streak having won their last nine matches against their Italian rival. Their last loss to Milano was in 2014. Milano, like Spain's Baskonia, want a playoff position and both teams are hosting Turkish sides. Baskonia will take on fourth-placed Anadolu Efes on Friday. Milano will have a hard time recovering from their 95-83 defeat to Panathinaikos and though it counts for home advantage, Fenerbahçe's previous record against the Italian outfit may be daunting for Milano. A playoff spot will then depend on the loss of Italian side's other rivals. A Round 30 fight for playoff berths will be more challenging if it gives in to Fenerbahçe.

In their last meeting, Milano lost 92-85 in Round 12 to Fenerbahçe. Marko Guduric and Jan Vesely of Fenerbahçe respectively scored 20 and 17 points and Vesely will be a particular threat to the Italian side. Vesely is number three in steals in the regular season with 37 steals. In Milano, Mike James scored a career-high 31 points in the last game against Fenerbahçe and the U.S. player remains in top form, dominating the list of best players this season in blocks and 3-pointers. James ranks first in index rating in EuroLeague this season while Vesely is in the third place. So, it will play out more like a clash of titans in fashion capital's Mediolanum Forum. Milan conceded at least 90 points in more than half of its games this season and Fenerbahçe has reached 90 in seven matches this season and easily won all of them. The Italian side might revert to slower gameplay and count on the advantage of the size and foul-drawing abilities of its players. Fenerbahçe boasts a strong defense and it remains to be seen whether Mike James, who scored an average of 20.4 points per game (ppg), will pierce it through.

It does look like Anadolu Efes has no ambition other than staying in the fourth spot and Baskonia has been impressive in home games, with eight consecutive wins recently. It may have a chance to advance, based on the possible failure of its other rivals. Anadolu Efes won its last two away games but also lost three in a row before that.

The Turkish outfit last took on its Spanish rival in Round 10 and handed them a 96-85 defeat. Baskonia will rely on Vincent Poirier in the absence of injured star Toko Shengelia.

Efes hopes to overcome young Frenchman with Bryant Dunston which holds two separate titles of EuroLeague Best Defender. It may be a close game if Baskonia goes with offensive rebounding it has been so good throughout the season. Their record is 11.1 offensive rebounds per game, fourth in the league with Efes at the bottom with 8.3 per game. The Turkish side, on the other hand, ranks among the best in the EuroLeague with 2-point and 3-point accuracy.