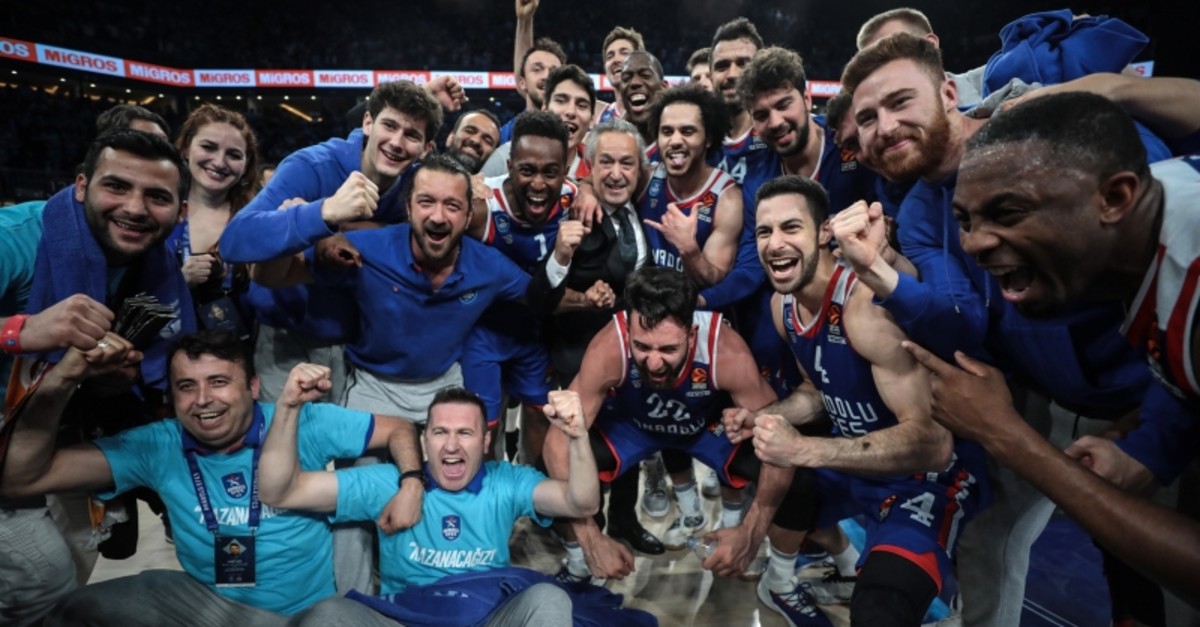 Turkish basketball fans cheered on Wednesday as Anadolu Efes clinched a historic win against Barcelona Lassa. The Turkish outfit made history by winning its first-ever Final Four ticket in the Turkish Airlines (THY) EuroLeague. It joined Fenerbahçe Beko as the second Turkish team in the prestigious event, which will begin in two weeks' time. It is the first time two Turkish teams will compete in the Final Four and for Anadolu Efes, the first ticket to finals in 18 years.

Congratulations poured in for the Turkish outfit after its 80-71 victory over the Spanish team at Istanbul's Sinan Erdem Dome. President Recep Tayyip Erdoğan was among those celebrating the victory, tweeting his "heartfelt" congratulations both to Anadolu Efes and Fenerbahçe. "Let the best one win in the Final Four!" the president tweeted after Turkish team's victory.

Anadolu Efes' win in Game 5 against Barcelona placed it against Fenerbahçe in the semifinals in Spain on May 17. In front of a fervent crowd of fans, the Turkish outfit that wrapped up the regular season in fourth place in EuroLeague, performed one of their best comebacks, a season after it dropped to the bottom of the European competition.

Adrien Moerman and Shane Larkin carried the team to victory by scoring 18 points each. Rodrigue Beaubois and James Anderson followed them with 11 points each while stellar Serbian guard Vasilije Micic tallied 10 points, 10 assists and three steals.

Barcelona started out well but Anadolu Efes made a strong showing by finishing the second quarter to lead 47-42 by the break. It extended the gap to 11 in the fourth quarter. For Barcelona, the stars of the game were Chris Singleton and Thomas Heurtel, who scored 12 points each. The Spanish side still had a chance to overcome the odds up until final minutes but Anadolu Efes' powerful defense crushed their hopes, before a decisive 3-pointer from Adrien Moerman.

Speaking after the match, Anadolu Efes coach Ergin Ataman said: "This was a final game, there is no technical analysis. I said before the game, I wrote on social media, the team that played better the entire season will win this series. I am proud of my players, I am proud of all Turkish fans, around 17,000 supporters in here. Many people could not come because there were no more tickets. I am sure everybody was in front of the TV. After [18] years, we are in the Final Four. I am proud of my players."

"I [said] before the game we must win for all the people in the arena, for all the people in Turkey in front of the TV, all Turkish supporters all over the world. I know everyone was with us with their heart. Congratulations to Barcelona, they never give up. But tonight it was very difficult to beat us with these fans. Incredible atmosphere, I am so proud of my players. We made a great season. It was very difficult; it was very emotional for me. We will see at the Final Four, but now we will enjoy this, after years Efes is in the Final Four and I am proud of this. Fenerbahçe is the best team in Europe. They have the best technical staff with coach Zeljko Obradovic. I hope all Turkish fans in Vitoria will enjoy this all-Turkish semifinal," he added.

"This is my first Final Four and I am very happy. We fought. We lost one game here, we went to Barcelona and got one win, and we had Game 5 here at home. They played great today, but we played better at the end. We are very happy, we fought the entire season. It is great for everybody, and we are going to enjoy," Adrien Moerman said after the game.

"This team is hungry. Every day we practice hard. When we lose we are mad, we come back to the court every day. And coach gives us motivation, too. All the players are amazing; it is great to play with them. Fans were amazing tonight and we got the Final Four after so much time. I think when we finished fourth [in the regular season], I thought we had a team to reach the Final Four. We have a lot of talent. We have players who can score. Tonight it was me, before, it was Shane [Larkin], that is a team. We know from the beginning we can do something big, and we did it," he added.

Anadolu Efes won the first playoff game against Barcelona at home and Game 3 on the road. Barcelona, however, evened the series each time by winning Game 2 in Istanbul and Game 4 at home. The Turkish side's back-court shone with Vasilije Micic's 21 points and 7 assists in the first game and Shane Larkin impressed with 30 points in Game 3. The Turkish team outpaced others in the EuroLeague with its successful offensive and an average of 85.4 points per game in the regular season and 80.3 in the playoffs.