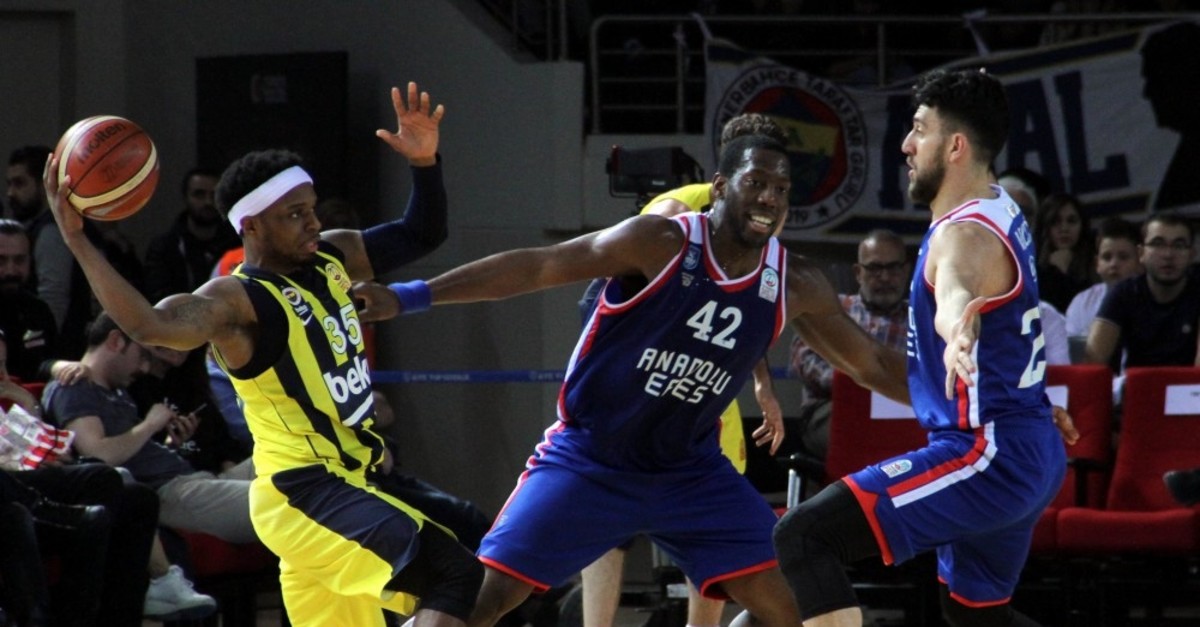 Returning to EuroLeague basketball after 19 years, Anadolu Efes is confident it can revive its old-time spirit. The team is also adamant that it will claim the championship this year

On the first day this month, Turkey's leading basketball club Anadolu Efes defeated Barcelona Lassa 80-71 and made it to the Turkish Airlines EuroLeague Final Four. Tonight, Anadolu Efes will battle another Turkish team, Fenerbahçe Beko, which played against European teams in the last three Final Four games and won one in 2017.

Ergin Ataman, the head coach who has carried the Anadolu Efes basketball team to the Final-Four in the Turkish Airlines EuroLeague, said that the navy blue-white team that achieved successes in Europe in previous seasons has returned.

The last time Anadolu Efes competed in the EuroLeague was 19 years ago in 2000 when the team was beaten by Panathinaikos Athens during the Final Four.

Recalling that Anadolu Efes was at such levels in previous seasons, but was eliminated in the playoffs in previous seasons, Ataman told journalists during a press meeting: "We have managed to make Turkey like basketball again. We have seen that the team that plays basketball well and that struggles well is cherished by the Turkish people. I said in the middle of the season that 'The spirit of Anadolu Efes is coming back.' And this spirit has come back. I do not know which point we will reach at the end of the season. Regardless of whether we become champions in the EuroLeague and make it into the finals, Anadolu Efes has returned now. I hope it will continue like this from now on."

Touching on the match that they will play with Fenerbahçe Beko in the semifinals, Ataman said: "We have encountered Fenerbahçe six times this season and drew three of those matches and won three. Fenerbahçe Beko started as the favorite team in the EuroLeague, completed the league as the leader and had a good season. It will definitely be a challenging match, as there are no low-hanging-fruit teams in the Final Four. The champion teams of the last three seasons are in the Final Four. Fenerbahçe Beko is the strongest and the favorite team in the league. The fact that we have won three times this season, we know strategies well, and we have high self confidence, as well as the experience we gained in the playoffs, brings advantages to us."

In response to a question whether attack or defense determines the teams to advance to the finals, Ataman said: "In my strategy, they are related to each other. When we attack well, we defend with enthusiasm; when we defend well, we go to fast attacks, which is one of our biggest weapons. Fenerbahçe is a team that plays in a more controlled manner, and it is not easy to get ahead of them in set attacks. We need to defend well and score points with fast attacks. We are a team that plays basketball fast with the creativity of shorts. Fenerbahçe Beko is a team that uses its physical characteristics well. Players' performance will determine the team that will advance to the finals."

Noting that they considered the semifinal match before the final match, Ataman reminded that they could not defeat Real Madrid and CSKA Moscow, two of their potential rivals, this season, and said: "We lost two matches in Istanbul with the last second basket of our rivals. They both have baskets owed to us. Whichever comes, we want revenge and to bring the cup."

The challenge between Anadolu Efes and Fenerbahçe Beko and between Ergin Ataman and Zeljko Obradovic in the Final Four will make significant contributions to basketball, the veteran coach said, adding: "It is great that two Turkish teams play in such an important event, which is the biggest sports organization in the world. There are also a Spanish and a Russian team. Obradovic has taken Fenerbahçe to the final for the last five years, which is a great success. Over the last five seasons, we have played a lot of matches and derbies. We had a long time Fenerbahçe-Galatasaray competition, and we have had the Anadolu Efes-Fenerbaçe Beko competition for the last two seasons. It gives me pleasure to encounter the most prominent coach in the EuroLeague."

Anadolu Efes' pivot basketball player Bryant Dunston touched on the things that have changed since last season, saying: "The most important difference has been our changing chemistry as a team. Everyone in the team has sacrificed and struggled for each other. Actually, I knew this from the moment we started signing contracts with the new players. The management of the club did well to bring serious and experienced players to the team. The players we signed contracts with this season are players who know how to play big games."

In response to the question of how Fenerbahçe Beko's missing players will affect them, Dunston said: "Of course, it is bad for them to have injuries, but there is nothing different for us; regardless of whoever is in the field, we will continue to play in the same way. This is the Final Four; if you have a 50 percent chance to play, you play it in the field. It is likely to be so there. That is why we will prepare as if everyone will play."

"I have been serving this club for years as a captain and it has always been disappointing to come back from the door of the Final Four. We are relieved to have achieved this. We want to go to Spain very enthusiastically and eagerly and to win against Fenerbahçe Beko," Anadolu Efes team captain Doğuş Balbay said.

Balbay expressed happiness at achieving this success for which they have been longing for a long time.

Speaking on media day at the Sinan Erdem Sports Hall, Balbay said that veteran supporters of Anadolu Efes, in particular, have long waited for this success. He added: "This year has been quite different for us. There has been longing in the club staff and players. I have been serving this club for years as a captain and it has always been disappointing to come back from the door of the Final Four. We are relieved to have achieved this."

Expressing their self-confidence, Balbay noted: "We have an equal chance with [Fenerbahçe Beko in the semifinals]. We showed it in the matches we played. The winner of the Final Four will be Turkish basketball. The fact that two out of the best four teams at the top of Europe are Turkish teams demonstrates this. This makes us proud. After all, a Turkish team will play in the final. I hope it is Anadolu Efes. We have been working to this end. We want to go to Spain very enthusiastically and eagerly and to win against Fenerbahçe Beko." Highlighting that staff change has been a major factor in Anadolu Efes advancing to the Final Four from the last rank in the EuroLeague last season, Doğuş said: "The fact that nine qualified and professional players have joined us and that some of them have experience in the Final Four and the NBA has minimized the adaptation period. We have reflected the spirit of Anadolu Efes. Everyone has done their best to achieve our goals. Everyone has worked with dedication. The story and hero of every single match have been different. The club's contribution has also been different this year."

Indicating that they have never worried about their Final Four target, Balbay added, "As Anadolu Efes, we have ended our 18-year longing for the Final Four. We are under the same conditions as other teams. CSKA Moskow and Real Madrid will vet in the other match of the semifinals. Sometimes, we surpassed these teams in the matches we played during the season. Sometimes, we exhibited our difference. What matters is the first match. It does not matter who is coming in the finals."