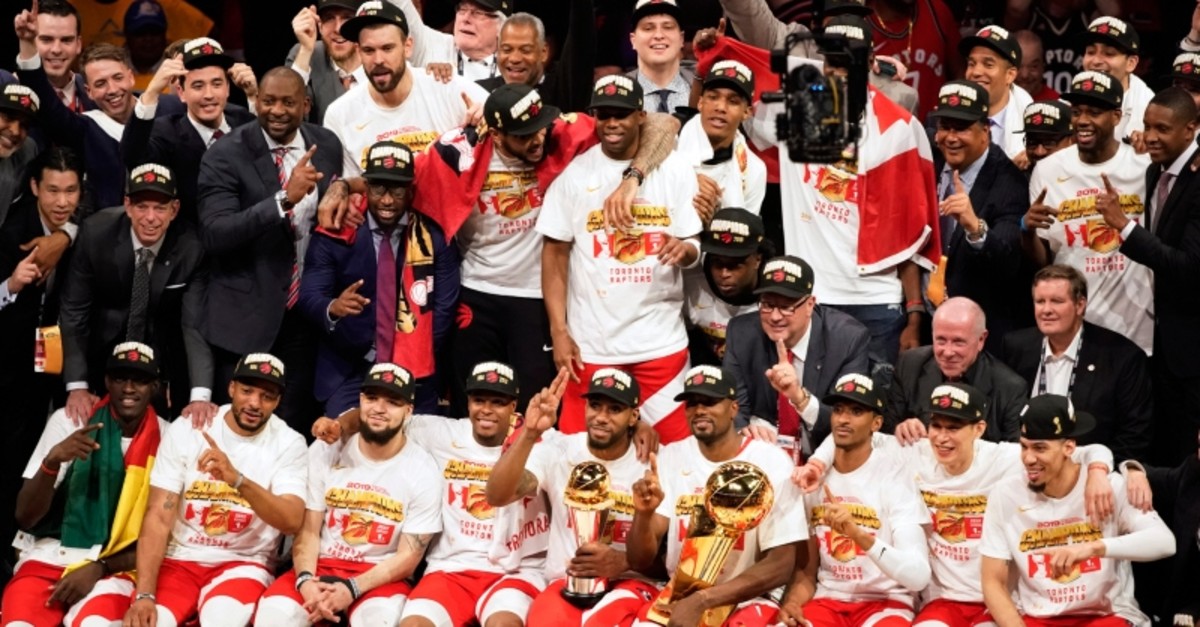 An upstart Toronto Raptors squad dethroned defending champions Golden State Warriors on Thursday, defeating the Warriors 114-110 to win the NBA Finals and capture the first crown by a club from outside the United States, sending fans throughout Canada to the streets.

Kyle Lowry and Pascal Siakam each scored 26 points while Kawhi Leonard and reserve Fred VanVleet both had 22 as Toronto won the best-of-seven series four games to two.

Leonard was named the NBA Finals Most Valuable Player for the second time in his career after the first in 2014 with San Antonio, which traded him to Toronto last July.

"Last summer I was going through a lot. I just kept working hard and had my mind set on this goal right here," Leonard said. "This is why I play basketball. This is what I work hard for. I'm glad to see it all pay off."

The 27-year-old forward from Los Angeles, who first won the award in 2014 when he led San Antonio to the crown, joined Kareem Abdul-Jabbar and LeBron James as the only players to win the award with two different clubs.

"I didn't come out in this series trying to win (the MVP award)," Leonard said. "It was a whole group collectively. I just kept striving and pushing and I ended up with the trophy but everybody deserves it."

It's hard to deny Leonard's heroics, notably his four-bounce buzzer beater in game seven to defeat Philadelphia in the second round.

His 732 points in this year's playoffs are the third-most in any playoff run, 16 fewer than LeBron James last year and 27 off Michael Jordan's 1992 record.

The championship win by the Raptors marked the first for a Canadian team in one of the big four professional sports since the Toronto Blue Jays won the Major League Baseball 1993 World Series. A parade will be held on Monday.

"It means a lot for our city and the country and for these players," Raptors coach Nick Nurse said, who didn't mind not winning it at home. "You get the win and you're just happy you got it and celebrate that fact."

The Raptors spoiled the Warriors' farewell appearance at Oracle Arena. Golden State's home since 1971 will be replaced by a new $1 billion venue in San Francisco next season.

"To be able to celebrate with these guys is awesome," Siakam said, the flag of his homeland Cameroon draped around his shoulders.

"It's a dream to have achieved this," Spanish center Marc Gasol said. "I've never worked so hard."

Klay Thompson scored 30 points to lead the Warriors but left the game with a torn left knee ligament late in the third quarter after landing awkwardly on his left leg.

It was the latest setback for an injury-hit Golden State team competing in its fifth straight final that was already without two-time NBA Finals Most Valuable Player Kevin Durant, who returned in game five Monday after being sidelined for a month only to suffer a ruptured right Achilles tendon.

"Tough, tough way to go out," Curry said. "I think a lot has been proven about who we are as a team and the adversity we faced throughout the playoff run.

"The DNA and character we have on this team, I wouldn't bet against us being back on this stage next year and going forward."

"Everybody on this team played with a lot of heart," Green said. "We just came up a little short."

Golden State had a final shot to win trailing 111-110 but Curry missed a 3-pointer and Green called a timeout when the team had none, setting up three final free throws by Leonard to seal the victory.

The Warriors failed in their bid for a third consecutive title and to become the first team in 50 years to win four titles in five seasons.

"To say I'm a world champion makes me feel great," Lowry said. "It's just kind of still surreal. It hasn't hit me yet. I'm still in this moment of like is this real yet?

"I'm happy to say I'm a champion and it has been a long time coming."

Golden State led 80-76 when disaster struck. Thompson landed awkwardly on his left leg on a missed shot and went to the floor writhing in pain, being helped to the locker room.

Thompson turned back and returned to the court, a standing crowd screaming with delight to see him sink two free throws, giving the Warriors their biggest lead at 85-80.

But after he was seen limping, Thompson was removed and later left the arena on crutches.

VanVleet, who had 12 points in the fouth quarter, sank two 3-pointers and his three free throws with 5:39 remaining pulled the Raptors level at 99-99.

VanVleet struck again from 3-point range and Serge Ibaka scored off a rebound to put Toronto ahead 106-101 with 3:03 remaining.

Green's 3-pointer pulled the Warriors within 108-105 and after trading free throws, Cousins scored on a layup to pull Golden State within 109-108 with 46 seconds remaining. 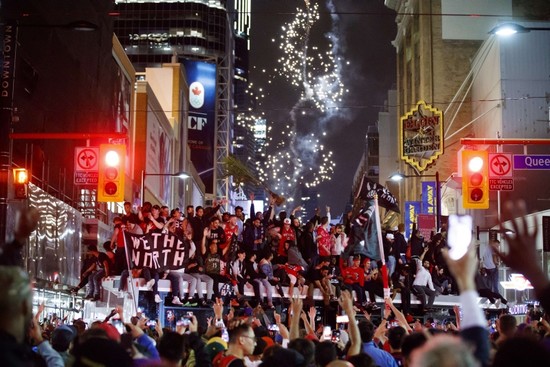 Coast to coast celebrations in Canada

Canadians erupted from coast to coast and all the way up to the Arctic, pouring onto the streets and honked horns in Toronto and elsewhere.

"And that's how we do it in the North," Prime Minister Justin Trudeau tweeted above a photo of him, two of his children and a dog watching the game.

Thousands of spectators who jammed Jurassic Park, the fan zone outside the team's empty downtown arena, to watch Game 6 of the NBA Finals on big screens screamed in gleeful pandemonium as the final buzzer sounded on the Raptors' 114-110 victory over the Golden State Warriors.

The venue was filled to its maximum capacity of 5,000 fans for every game in the best of seven series. For Game 5 in Toronto, fans lined up for two days to get inside the park and set up camp. 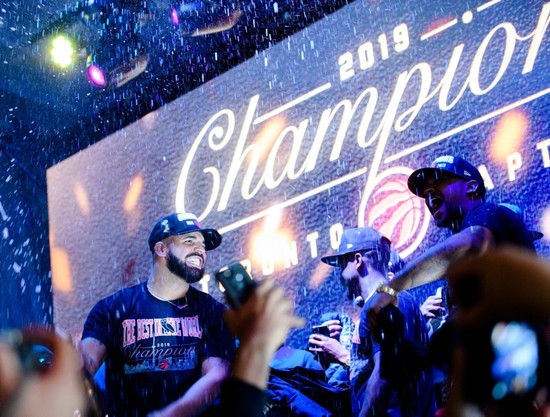 "We did this off of love," Drake said after the game. "We willed this into existence."

The crowd sang Queen's "We Are the Champions" as they streamed into clogged streets. Some climbed poles and waved shirts. Car horns blared in a triumphant cacophony.

Fans set off fireworks as confetti rained down, creating a carnival-type atmosphere on the streets of Canada's biggest city. The landmark CN Tower was bathed in gold light as cheering people walked by.

Fans had gathered both indoors and at dozens of outdoor venues across the country to cheer on a team from a city many Canadians love to hate, their enthusiasm measured by unusually jammed bars.

In Mississauga, just west of Toronto, 30,000 fans regularly attended viewing parties. Dozens of cities across Ontario also held packed viewing events as did many other places from coast to coast, such as Halifax, which threw a massive outdoor block party.

Montreal shut down two city blocks to allow the improbable: people cheering a team from Toronto. Thousands braved the rain, forming a red tide, as organizers handing out "We the North" T-shirts.

One man was booed when he arrived in a blue Warriors T-shirt. But he ripped it off to reveal a Raptors jersey. The Warriors shirt was set on fire, burning until police doused it. Fans in Regina, as they did on Monday, watched on the massive screen at the Roughriders' home stadium, while Edmontonians headed to the Expo Centre.

Even in Rockford, Illinois, hometown to Raptors guard Fred VanVleet, fans began a party at 6 p.m. at the newly created Jurassic Park RKFD to watch their local hero perform.

"Fred is an amazing basketball player and a genuinely good person both on and off the court," Rockford Mayor Tom McNamara said.

"I remember coming here as an immigrant from Sri Lanka in 1989 and we watched Joe Carter hit that home run for the Jays," said Subi Mahan, 37, of Pickering, Ontario, who was with his two boys, Kiyan, 6, and Kishan, 9. "(So) to be here and share this with my boys is amazing. This is what love is."

Love of the Raptors, with their best performance in their 24 seasons, prompted Toronto Mayor John Tory to don his now-signature black-and-gold blazer to visit the gathering crowd Thursday.

"It is beyond comprehension that people could be down here, huddled under these makeshift tents, for hours on end, more than a day, overnight," Tory said. "It's cold, it's rainy, it's been such a terrible spring, but they've been here week after week, day after day, and they're the greatest fans in sports."

The fever spread as far as Rankin Inlet, a small Arctic town some 2,280 km (1,415 miles) north of Toronto, where children played well into the night under a sun that never sets in the summer.

The Raptors frenzy also set records for ticket prices. Game 1, won by the Raptors in Toronto, posted an average ticket price of $1,400, a record for the first game of an NBA Finals, and the most expensive live event ticket in Toronto, according to ticket platform SeatGeek.

Game 5 set record viewership numbers in Canada for NBA games, the league said, with an average of 6.4 million viewers.

That means Game 5 was the most watched broadcast of 2019 in Canada.

"It's a moment in time where we can see the Toronto Raptors and basketball unite us as a country and brings us to feel like they're sharing experiences with one another," she said.