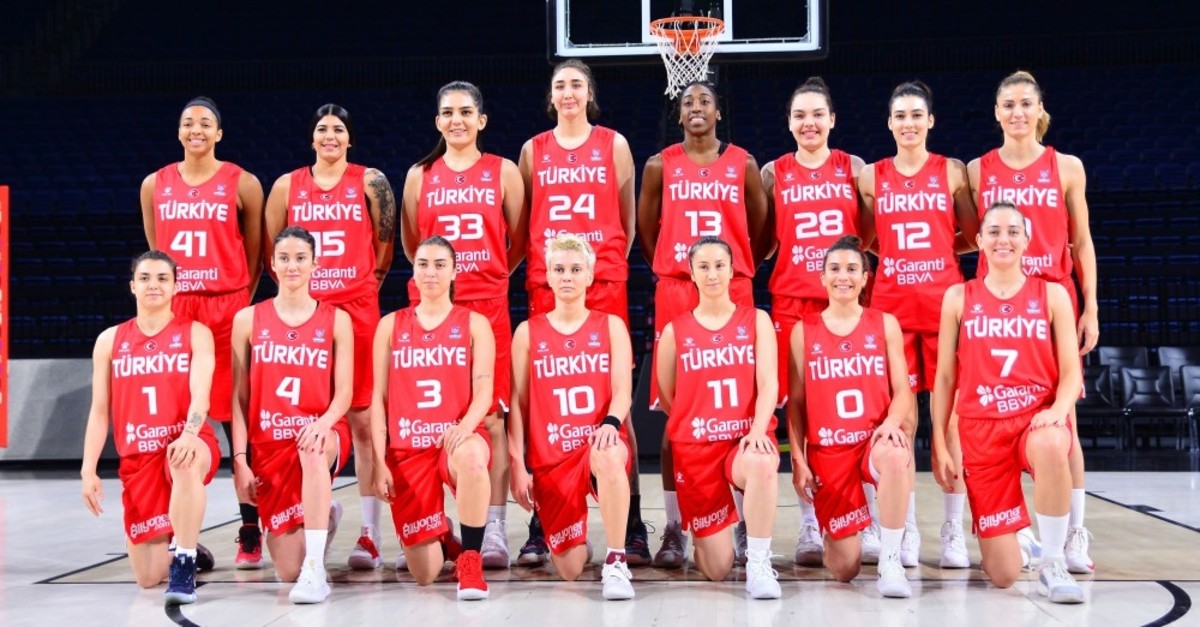 The team secured spots in the top five in the last four editions of Eurobasket and seek to reach the finals for qualification for the Tokyo 2020 Olympics.
by daily sabah
Jun 27, 2019 12:19 am

Women's national basketball team set to square off against Italy as FIBA Women's EuroBasket 2019 starts today, with the team seeking a place in the top five to qualify for next year's Olympics

Turkey's Fairies of the Basket travel to Serbia today for the FIBA Women's EuroBasket 2019, top European tournament in women's basketball. The national team will challenge Italy in its first match in Group C as it seeks a spot for the Tokyo 2020 Olympics qualifications. The tournament, which will end on July 7, is their only chance to secure qualifiers for next year's Olympics and they want to build on their success in recent years that brought the team silver and bronze medals.

Jointly held by Serbia and Latvia, the event starts with the Sweden-Montenegro match. Turkey will play in Nis, Serbia, in its first game before taking on Slovenia tomorrow in Nis and cap its group games with a Sunday match against Hungary.

The Turkish team relies on captain Işıl Alben, while head coach Ceyhun Yıldızoğlu was forced to include only one naturalized player in the lineup after Quanitra Hollingsworth had to skip the tournament due to injury. Instead, Kiah Stokes will be in the lineup. Olcay Çakır Turgut, Bahar Çağlar and Tilbe Şenyürek round the team's top stars.

The Turkish side enjoyed a good run in past editions of the event. Starting its ascent in 2010, the team managed to find a spot in the top five in the last four tournaments, before winning its first tournament medal in 2011. After a loss to host France in the semifinals in 2013, the team won bronze after a victory against Serbia. It failed to garner any medals in the 2015 and 2017 editions but reached the top five anyway.

Fairies joined the Olympics for the first time when they qualified for London 2012. They managed to reach the quarterfinals then, only to be defeated by Russia. Similarly, it lost to Spain on a last-minute point in Rio 2016. On a global level, Turkey reached the fourth spot when it joined the World Championship for the first time in 2014. The 2018 World Cup, however, proved disastrous, and they were eliminated in the second round.

Point guard Pelin Derya Bilgiç is confident of a medal, citing their accomplishment in exhibition matches they played as part of their training for the tournament. "We have the capacity," Bilgiç told İhlas News Agency. "More often than not, you face rivals with surprising success. So, you have to be careful and concentrate, no matter how different each team you face is. Slovenia and Hungary, for instance, are rivals we should not underestimate. We had a friendly with Slovenia and are aware of the quality of their players. Similarly, we played against Hungary without their naturalized players, and they were good," she said, adding that rivals were still "not unbeatable." The 25-year-old player says they'd be happy to play finals but their approach was "step by step."

"Our main goal is to be eligible for the Olympics, and this requires a spot in the top five. We set out a greater ambition, and why shouldn't we win a medal too? We have the capacity and I won't be surprised if we play in the finals," she said. Bilgiç counts on a stable lineup for success. "[The lineup] did not change much, and we have been playing together for years, and some players have been playing together even since they were rookies. Of course, we are a bit inexperienced as most players are young, but I think our energy will help us to overcome such a shortcoming," she said.