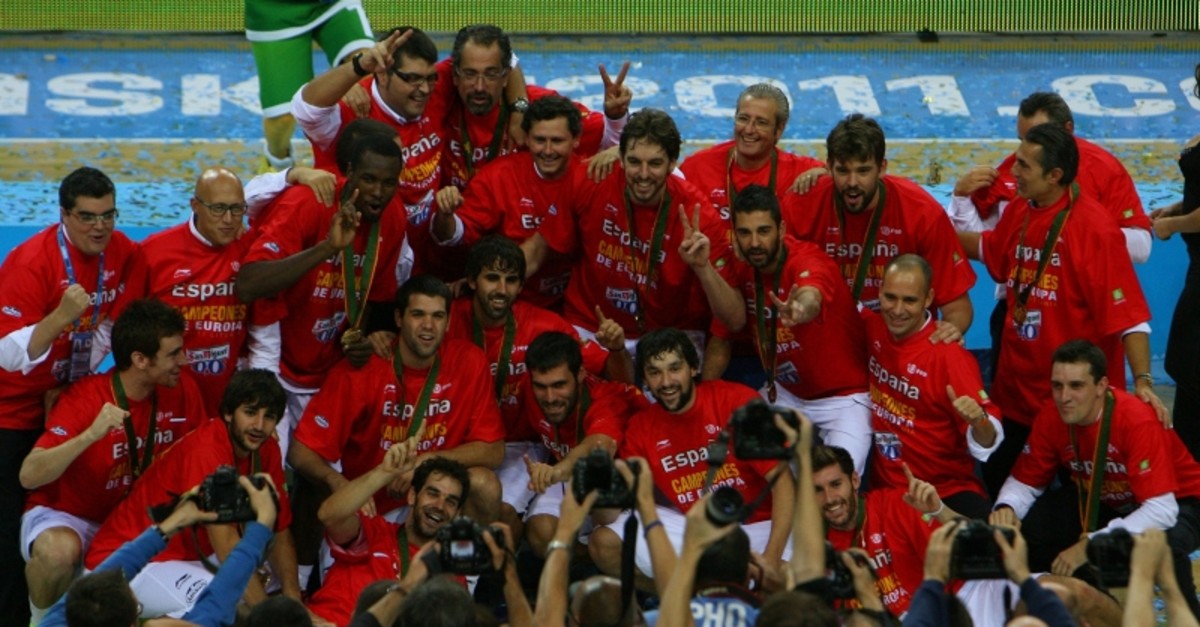 The Spanish national basketball team celebrates their victory at the end of the EuroBasket 2011 final between Spain and France in Kaunas on September 18, 2011. (AFP Photo)
by Daily Sabah with AA Aug 31, 2019 12:25 am

Spain, regarded as one of the 2019 FIBA Basketball World Cup favorites, aims to bring the sport's premier international trophy back to Madrid

With a roster of stars like Rudy Fernandez, Marc Gasol, Sergio Llull, Ricky Rubio and the Hernangomez brothers, Willy and Juancho, the 2006 world champions Spain have arrived in China to reclaim the title at the 2019 FIBA Basketball World Cup.

Spanish playmaker point guard Llull and forward Fernandez are also teammates at their club, Real Madrid. The pair will be one of the Spanish aces at China 2019.

Gasol will also be a threat against Spain's opponents. An NBA player since 2008, he has spent most of his career at the Memphis Grizzlies. Last season, Gasol, playing in the center position, helped the Toronto Raptors win their first NBA title. He first appeared in Japan 2006, contributing to Spain winning the World Cup.

Spain is one of Europe's most intimidating teams, winning the European Basketball Championship, largely known as EuroBasket, in 2009, 2011 and 2015.

Phoenix Suns point guard Rubio will be alongside Llull, Fernandez and Gasol to bring the cup to Madrid.

Siblings Willy and Juancho Hernangomez play in the NBA. Charlotte Hornets center Willy and his brother, Denver Nuggets power forward Juancho are expected to combine their skills to carry Spain through. The duo will be making their first World Cup appearance.

Spain hosted the previous World Cup in 2014 but failed to win a medal. They will face Iran, Puerto Rico and Tunisia in Group C.

The 2019 FIBA World Cup will be hosted by China from Aug. 31 to Sept.15, bringing a record 32 countries together to compete for the title.

The other team in Group C is Puerto Rico. The basketball team from the Americas is one of the experienced teams in the World Cup, qualifying for the top-tier international championship 14 times.

Puerto Rico did its best at Argentina 1990, reaching the semifinals. It finished fourth in Buenos Aires. Despite being a World Cup regular, Puerto Rico has yet to be world champion. It missed the FIBA World Championships in 1950, 1954, 1970 and 1982. World No. 16, Puerto Rico ended the 2014 FIBA World Cup in 19th place out of 24 teams.

Underdog Tunisia will seek a miracle in Group C against Spain, Iran and Puerto Rico. China 2019 is their second World Cup tournament in history as the African team made its World Cup debut at Turkey 2010.

In 2010, Tunisia lost all five games to post the worst performance of that tournament. Italian team Olimpia Milano's small forward Michael Roll and Dallas Mavericks center Salah Mejri will be the leaders of Tunisia in China.