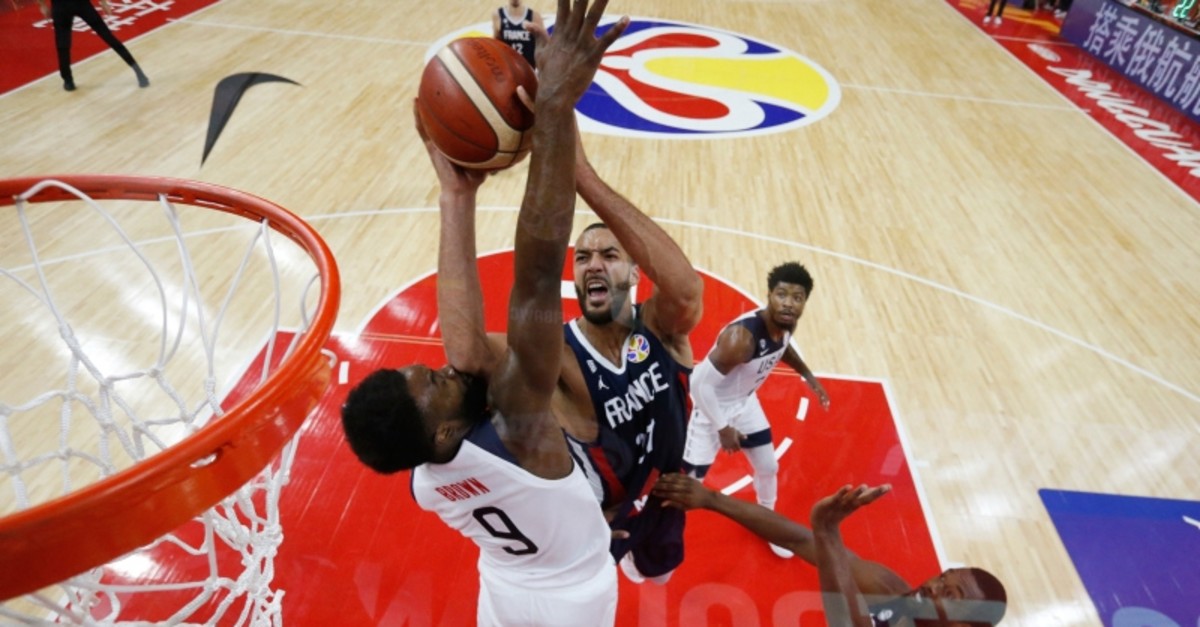 The U.S. has been ousted from medal contention by France at the World Cup, failing to capture gold at a major international tournament for the first time since the 2006 world championships.

France will play next on Friday in Beijing against Argentina, who advanced by defeating Serbia on Tuesday night. The U.S. will face Serbia in consolation round at Dongguan on Thursday. The other last four games will be Spain against the winner of Wednesday's late game between Australia and the Czech Republic.

The U.S. had won 58 consecutive tournament games in FIBA and Olympic competition, starting with the bronze-medal game at the 2006 world championships and continuing through every FIBA Americas, World Cup and Olympics event since. It was bidding to become the first nation to win three consecutive World Cups, after winning three straight Olympic golds in that span.

But the best the Americans can do now in China is finish fifth. They're going home with a berth in the 2020 Olympics secured, but no medal.

"We came here to win gold," Gobert said. "We knew it wasn't going to be easy. A lot of people counted us out, but we got the win."

"It doesn't mean anything if you don't win in the end," Gobert said.

Jazz shooting guard Donovan Mitchell scored 29 points for the U.S., all of them coming in the first three quarters. The Americans came up scoreless on six consecutive possessions down the stretch, the drought that allowed the French to take control of a back-and-forth game for the final time.

Mitchell had a chance to get the U.S. within two with about a minute left, driving against Gobert — but the Jazz center read what the Jazz guard was going to do perfectly, swatting the try away.

France had been 0-9 against the U.S. in major international play, most of those outcomes one-sided affairs. But the last meeting between the nations was only a 100-97 U.S. win at the Rio de Janeiro Olympics three years ago, and France returned three players — Gobert, De Colo and Nicolas Batum — who got minutes in that game.

None of the U.S. players who played that afternoon in Rio are on this year's World Cup team.

France outrebounded the U.S. 21-12 in the first half, Gobert found his way to the line 10 times in the game's first 20 minutes and the Americans went into the break trailing 45-39. The U.S. had trailed for 8:25 in their first five games combined — and trailed for 11:24 in the first half alone on Wednesday.

Fournier's layup with 7:33 left in the third gave France a 53-43 lead, and that's when Mitchell got going.

He had 14 points in the third quarter alone, and his dunk with 2:40 left pulled the U.S. into a 60-60 tie. Marcus Smart made three free throws after getting fouled by Gobert to put the U.S. back on top, and the Americans took a 66-63 lead into the fourth.

But they couldn't finish it off.

The writing has been on the wall for the U.S. squad, which sent a team of second-tier stars to the competition and promptly suffered a shock loss to Australia in a warm-up exhibition two weeks ago. The loss in Melbourne was the first for the U.S. in 78 consecutive games in major competitions and exhibition games.

France: Gobert played the first 12:26. The longest he went before getting his first break in a Jazz game last season was 11:30. ... Ntilikina scored 11 for France.

U.S.: Smart scored 11 and Kemba Walker had 10 for the U.S. ... Before Mitchell's offensive outburst Wednesday, the previous single-game scoring high for any U.S. player at this World Cup was Jaylen Brown's 20-point game against Japan in the opening group round. ... Jayson Tatum (sprained left ankle) missed his fourth consecutive game.
RELATED TOPICS