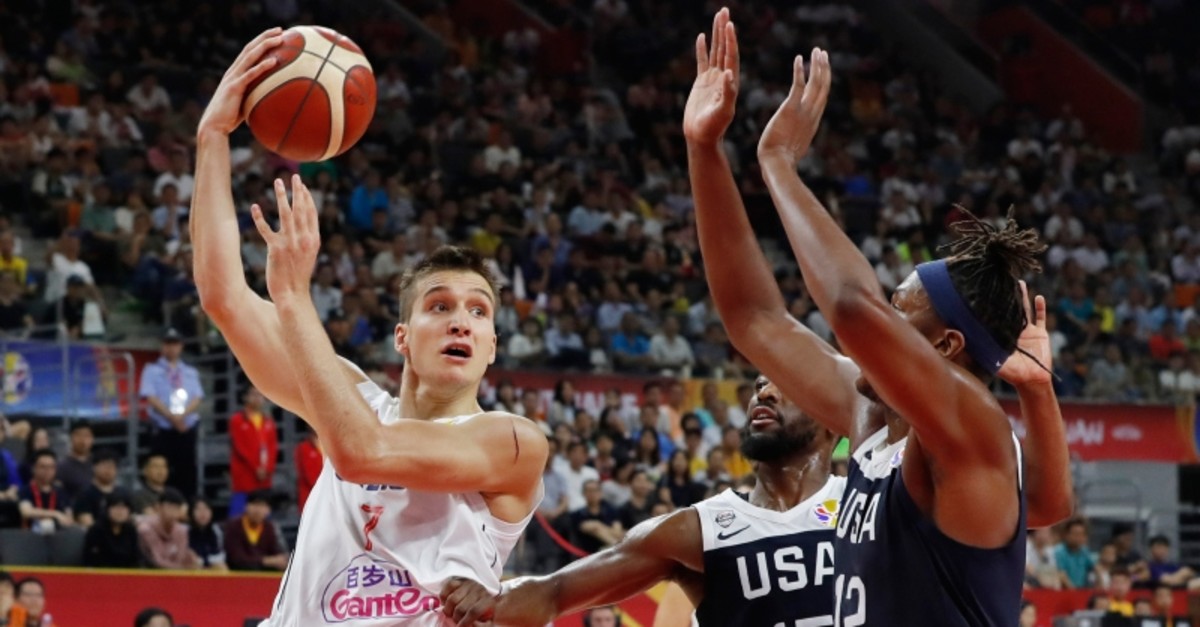 Deposed champions the United States lost 94-89 to Serbia in a dead-rubber at the Basketball World Cup on Thursday, a day after surrendering their 13-year unbeaten run.

A young Team USA made up of second-tier NBA stars were defeated 89-79 in the quarter-finals by France again in Dongguan on Wednesday, bringing a premature close to their World Cup defense.

More significantly, it was the reigning world and Olympic champions' first defeat in a major competition since the semi-finals of the 2006 World Cup.

The previous worst finish for a U.S. men's team in 45 tournament appearances was sixth at the 2002 world championships.

Thursday's "classification" game in Dongguan was the final that never was: the holders against the favorites.

The U.S. was down a scarcely believable 32-7 after the first quarter and headed for a big defeat, before clawing back some of the deficit and a degree of pride.

Harrison Barnes of the Sacramento Kings, the only remaining member of the triumphant 2016 Rio Olympic roster, said: "There are no regrets from our group in terms of what we've given, what we've sacrificed.

"The commitment everyone has made away from their families, their teams, their organizations."

Barnes scored 22 for the U.S., which got 18 from Kemba Walker and 16 from Khris Middleton.

There was no medal up for grabs and the U.S. have already qualified for next summer's Tokyo Games.

But there was added spice after Serbia's coach said prior to the World Cup that if the Americans met his team, "May god help them."

Sasha Djordjevic dismissed the comment as motivational irony but said that he could see the US were still shell-shocked from the France defeat in the first quarter.

Gregg Popovich's team failed to score a point during one barren five-minute period.

A rout was on the cards for Serbia, whose tournament also came to a surprise quarter-final end, at the hands of Argentina.

The 70-year-old Popovich chewed his lip and brooded.

But the U.S. fought back in the second quarter and reduced the gap to just four points at half-time.

Going into the fourth quarter, Serbia -- led once more by the Sacramento Kings' Bogdan Bogdanovic -- were only three points ahead.

But the U.S. comeback fell narrowly short and they have another classification match on Saturday to decide who finishes seventh and eighth.

Bogdanovic, who has been one of the players of the tournament in China, led all scoring with 28 points.

"It's a really tough game to play against those guys," Bogdanovic said. "I'm sure both teams were really upset after losing in the quarterfinals and we were just trying to make people happy."

Vladimir Lucic scored 15 for Serbia, which will play for fifth place Saturday.

Barnes said that the Americans would give it their all in their tournament closer, when they will face the loser of the Czech Republic versus Poland.

"On Saturday we have that opportunity to go out once again, play a game, represent our country," he said.

"For some of us -- potentially all of us -- it could be our last time we wear a USA jersey, or the beginning of many.

"We will just savor that opportunity."

Popovich lauded his team for making the comeback, basically 24 hours after seeing its medal hopes dashed by the quarterfinal loss to France.

"I can't tell you how much I've been impressed the whole time with their character, their stick-to-itiveness and their persistence as they're learning how to play together," Popovich said. "Tonight was a great example of that."

Despite the poor performance without headline NBA names such as LeBron James, Stephen Curry and James Harden, the reaction in the U.S. was not overly harsh.

"This was not a disaster for the USA, this was no embarrassment, this was not a lack of effort," the broadcster NBC wrote in an analysis. "It's simply another sign that the basketball universe is changing."

It is expected the U.S. will fight back emphatically come the Tokyo 2020 Olympics but broadcaster ESPN warned the structure of the squad and participation rate of superstars must improve if Team USA "wants to dominate these tournaments again."