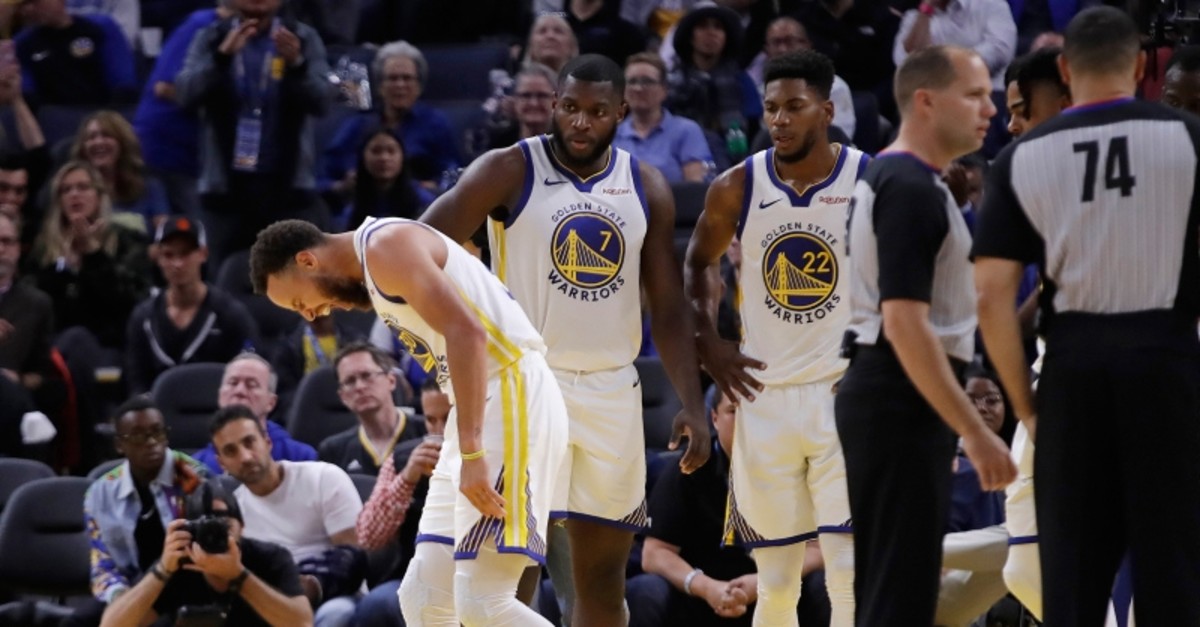 Golden State Warriors' Stephen Curry, left, grimaces after Phoenix Suns' Aron Baynes fell onto him during the second half of an NBA basketball game Wednesday, Oct. 30, 2019, in San Francisco. Curry left the game. (AP Photo)
by French Press Agency - AFP Oct 31, 2019 3:45 pm
The Golden State Warriors crumbling dynasty was dealt another jackhammer blow on Wednesday when superstar Stephen Curry suffered a broken hand against the Phoenix Suns. The two-time MVP Curry sustained the injury with 8:31 left in the third quarter as he drove to the rim and collided with Suns Aron Baynes in a one-sided 121-110 loss to Phoenix. "It's just a random basketball play, so stuff happens," said Warriors coach Steve Kerr.
The team confirmed Curry "had x-rays taken on his wrist and hand confirming the break". The injury took place while the Warriors were already losing badly and off to a disappointing 1-2 start to the NBA season. The Warriors did not immediately say whether Curry would need surgery or how long he would be out of the lineup. Curry is expected to be further examined by team doctors and will undergo a CT scan to determine the full extent of the damage. Baynes ended up landing awkwardly on top of Curry, who stayed on the ground for a few moments holding his wrist and then got up and tried to shake off the pain. He attempted to stay in the game before the Warriors called a timeout and Curry walked over to the bench and left for the locker room with the Suns dominating on the scoreboard.
"I just feel bad for him," Suns coach Monty Williams said. "When these guys who are the faces of the league go down it's not good for the league, but especially someone like Steph, who's done so much to raise the level of excitement here in the Bay Area and throughout the league."
A mix of superstars, coaching, supporting cast and championship experience had made the Warriors the strong pre-season favourites for the past several seasons. The loss of Curry, 31, for a possible extended period now leaves the Warriors as a shadow of their recent championship teams. Even before Curry got hurt, Golden State was already without departed Kevin Durant and Klay Thompson, who is injured and likely out for the entire season. Durant left as a free agent to join Brooklyn and Thompson underwent knee surgery following the finals loss which also marked their final game at Oracle Arena in Oakland. They also traded away Andre Iguodala to the Memphis Grizzlies. Their bid for a third straight championship and fourth in five years was dashed last season when they lost in the NBA finals in six games to the Toronto Raptors. Curry was a stellar offensive force in those three championships. On Wednesday, Phoenix led 43-14 at the end of the first quarter and 72-46 at halftime. At one stage the Suns went on a 30-1 run against the Warriors, who appear to be unraveling much sooner than anyone anticipated following their humbling finals loss to the Raptors.
Curry, who scored the first seven points for the Warriors, finished with nine points and six assists in 21 minutes of playing time. Devin Booker scored a game-high 31 points and Baynes finished with 24 points and 12 rebounds for the surprising Suns, who are off to a solid 3-2 start to the season. Ironically Baynes broke his left hand last season, had surgery and missed 13 games before returning to action. Rookie forward Eric Paschall, who was making his first career start, scored a team-high 20 points for the Warriors. The Warriors next game is Friday against the San Antonio Spurs, who at 3-0 are one of just two undefeated teams along with the Philadelphia 76ers.
Last Update: Dec 20, 2019 1:21 am
RELATED TOPICS