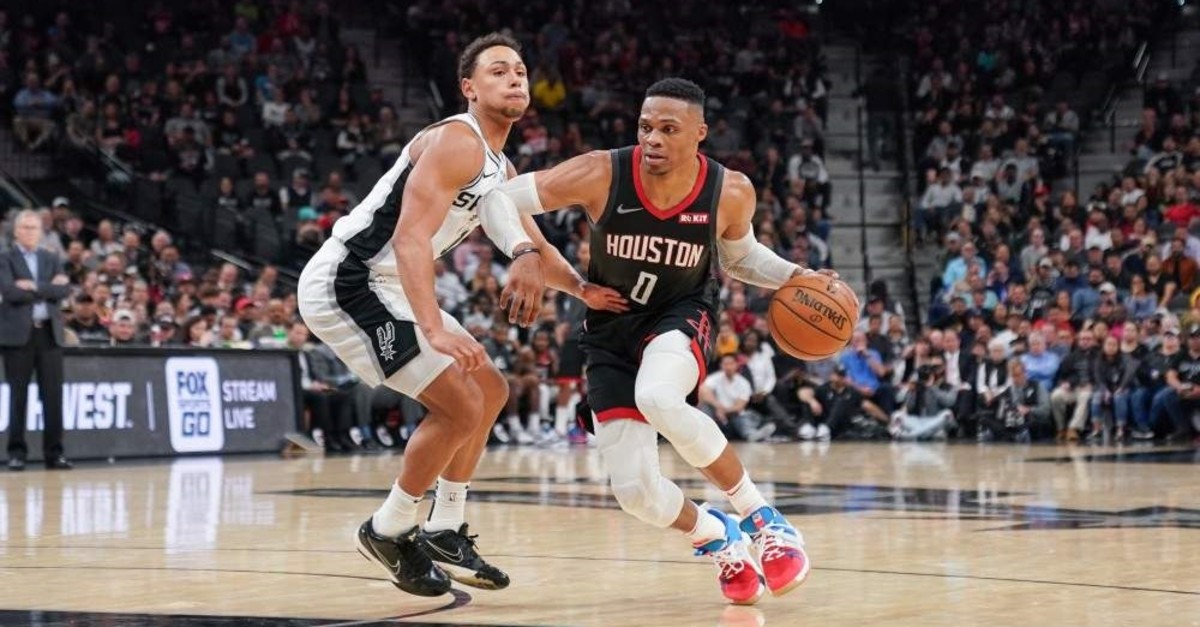 Rockets' Russell Westbrook drives past Spurs' Bryn Forbes in the second half of the match in San Antonio, Dec. 3, 2019. (Reuters Photo)
by Compiled from Wire Services Dec 04, 2019 3:52 pm

Lonnie Walker IV had a career-high 28 points and the San Antonio Spurs overcame James Harden’s 50 points by rallying from a late 10-point deficit to beat the Houston Rockets 135-133 in double overtime Tuesday night.

Harden played a season-high 49 minutes coming off a 60-point outing Saturday over three quarters against Atlanta. He was whistled for two charges in the second overtime. The second came against DeRozan with 0.8 seconds remaining, sealing San Antonio’s victory.

The Rockets led by 22 in the second half and were up double digits in the fourth quarter for all but the final 4:18.

Harden had six points in the second overtime, including a follow of Clint Capela’s missed free throw with 1:41 remaining to put Houston up 131-128. Bryn Forbes tied it at 131 with a 3-pointer, and the teams traded free throws the remainder of the game.

DeRozan was three for four on free throws in the final 30 seconds.

Capela had 22 points and 21 rebounds, and Austin Rivers and Russell Westbrook added 19 points each for Houston. Westbrook was 7-of-30 shooting but added 10 assists and 10 rebounds.

The Spurs were without starting power forward LaMarcus Aldridge, who missed his second straight game with a sore right thigh.

Houston outscored San Antonio 7-2 in the final two minutes of overtime to force a second OT. Harden’s runner bounded off the backboard and rim as the first overtime ended.

Walker had 18 points in the fourth quarter, including eight straight to close the game and force overtime. Walker’s run started with an alley-oop dunk followed by consecutive 3-pointers to tie it at 115-all with 11.5 seconds remaining.

The Spurs claimed their first lead behind a new rotation that featured Walker, second-year guard Dejounte Murray, Patty Mills, Drew Eubanks and Trey Lyles. The group outscored the Rockets 17-9 to close the first quarter to put San Antonio up 27-25.

Butler scored eight consecutive points in 55 seconds to begin the extra session as the Heat recovered after blowing a seven-point lead in the final two minutes of the fourth quarter.

Bam Adebayo scored 18 points, Justise Winslow had 17 and Kelly Olynyk 16 as the Heat snapped the Raptors’ season-high winning streak at seven games, and became the first visitor to win north of the border this season.

Pascal Siakam had 15 points and 12 rebounds, Norman Powell scored 23 points and Fred VanVleet had 19 for Toronto, which had won a franchise-record nine straight home games to begin the season.

The Raptors missed all nine of their field goal attempts in overtime.

LeBron James had 25 points, nine assists and a crucial dunk off a miss late in the fourth quarter to lead Los Angeles over Denver.

Anthony Davis shook off flu-like symptoms to score 25 points and add 10 rebounds for the Lakers.

Both teams were coming off losses that ended long winning streaks, but it was Los Angeles that bounced back behind James and Davis.

Davis missed the morning film session and his status for the game was questionable until just before tip-off. He showed no effects of illness, scoring 13 points in the third while shooting five of seven in the period.