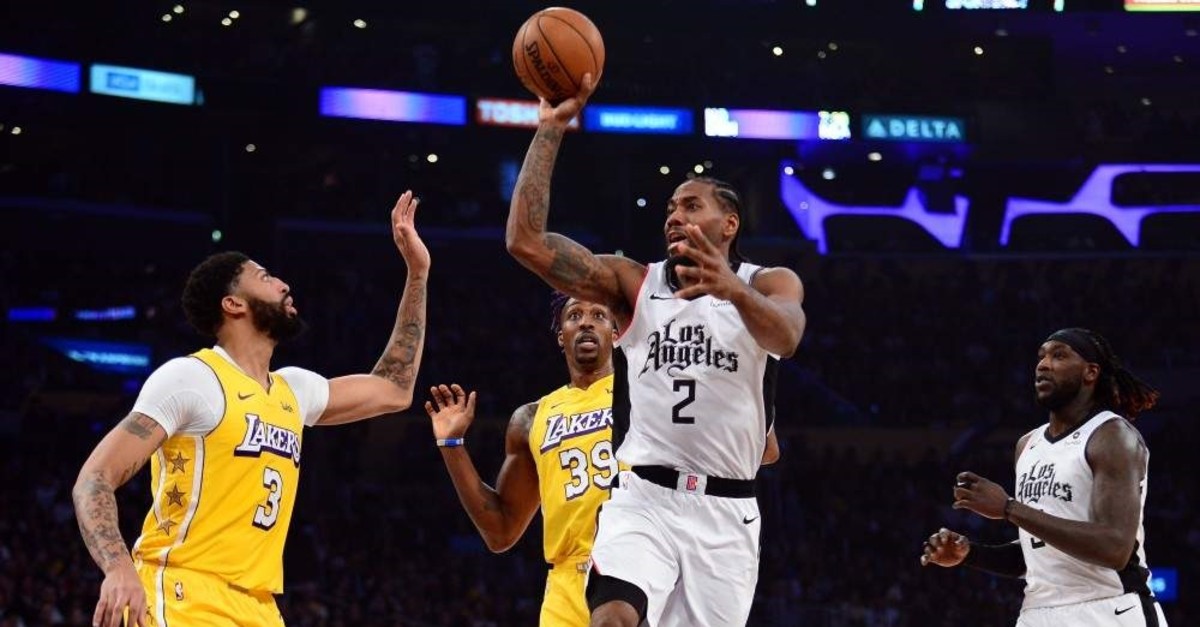 Kawhi Leonard moves to the ball against Lakers forward Anthony Davis during the first half, Dec. 25, 2019. (Reuters Photo)
by Compiled from Wire Services Dec 26, 2019 2:20 pm

Kawhi Leonard scored 35 points as the Clippers rallied to beat the Lakers 111-106 in an all-Los Angeles NBA showdown on Wednesday.

The Western Conference heavyweight clash was part of the NBA's five-game Christmas extravaganza, which saw the Philadelphia 76ers make a statement with a 121-109 victory over the league-leading Milwaukee Bucks.

Embiid pulled down 11 rebounds and played a key role in neutralizing Milwaukee's reigning NBA Most Valuable Player Giannis Antetokounmpo, who was held to 18 points on 8-of-23 shooting.

"The whole season I've been humble, but I want to be defensive player of the year, and I feel like tonight showed it," Embiid said.

The 76ers led by as many as 29 points as they handed the Bucks just their fifth defeat of the season.

"We had to go through this today," Antetokounmpo said. "We had to have our character tested today because the only way you get better is when you face adversity."

It was a back-and-forth battle in Los Angeles, where the Clippers and Lakers battled through 15 lead changes.

With superstar LeBron James off to a slow start offensively, the Lakers still managed to take control with a 17-2 scoring run to close the first half and take a 63-51 lead at the break.

The Lakers led by as many as 15 in the third quarter before the Clippers battled back to knot the score at 86-86 going into the fourth.

Three-pointers from James and Kentavious Caldwell-Pope helped push the Lakers to a 101-94 lead, but the Clippers tied it up again and took the lead for good with 3:29 remaining on their way to a second victory this season over the Lakers.

Leonard scored 11 points in the fourth quarter, and Patrick Beverley produced a key block of James's potential game-tying 3-pointer with 3.6 seconds to play.

"I just tried to make a play on a really great player," Beverley said after he swatted the ball and it went out of bounds – somehow off the hands of James. "I was fortunate to make a defensive play."

"We gave that one away," said Anthony Davis, who scored 24 points for the Lakers but lamented the team's "mental mistakes on both ends of the floor" late in the game.

Kyle Kuzma led the Lakers with 25 points while James finished with 23 points, nine rebounds and 10 assists in his team's fourth straight defeat.

Despite the breathless buildup to the "Battle of Los Angeles," Leonard scoffed at the idea that city bragging rights mattered.

"It was one game out of the season," he said. "Whoever won this game was not going to win the LA Championship or anything.

"Both teams have got their eyes on the biggest prize," he said.

A Christmas win was a welcome boost, however, for the struggling Golden State Warriors, who shocked the Houston Rockets 116-104 in San Francisco.

"This game meant a lot to us, and you can see it in the way our players approached it," Warriors coach Steve Kerr said.

While the Warriors have reached the last five NBA Finals, they've struggled with injuries that have seen stars Klay Thompson and Stephen Curry sidelined and were underdogs against the Rockets lineup featuring former MVPs James Harden and Russell Westbrook.

Draymond Green scored 16 of his 20 points in the second half, and Damion Lee added 22 points and a career-high 15 rebounds as the Warriors rallied to win their third straight – just their seventh victory of the season.

Westbrook had 30 points and 12 rebounds for Houston. Harden, averaging 38.6 points per game, had just 24 in the face of the Warriors' determined, disciplined defense.

"It's a lot of these guys' first time playing on Christmas," Green said. "That's a huge stage, and to come out and execute like we did and to actually get a win like we did against a very good team, it definitely feels good."

There was another upset in Denver, where the lowly New Orleans Pelicans toppled the Nuggets 112-100.

Brandon Ingram scored 31 points for the Pelicans – who are second-from last in the West – and New Orleans snapped the second-placed Nuggets' seven-game winning streak.

The holiday slate tipped off in Toronto, where Jaylen Brown scored 30 points to lead the Boston Celtics to a 118-102 win over the reigning champion Raptors in the first Christmas Day game in Canada.