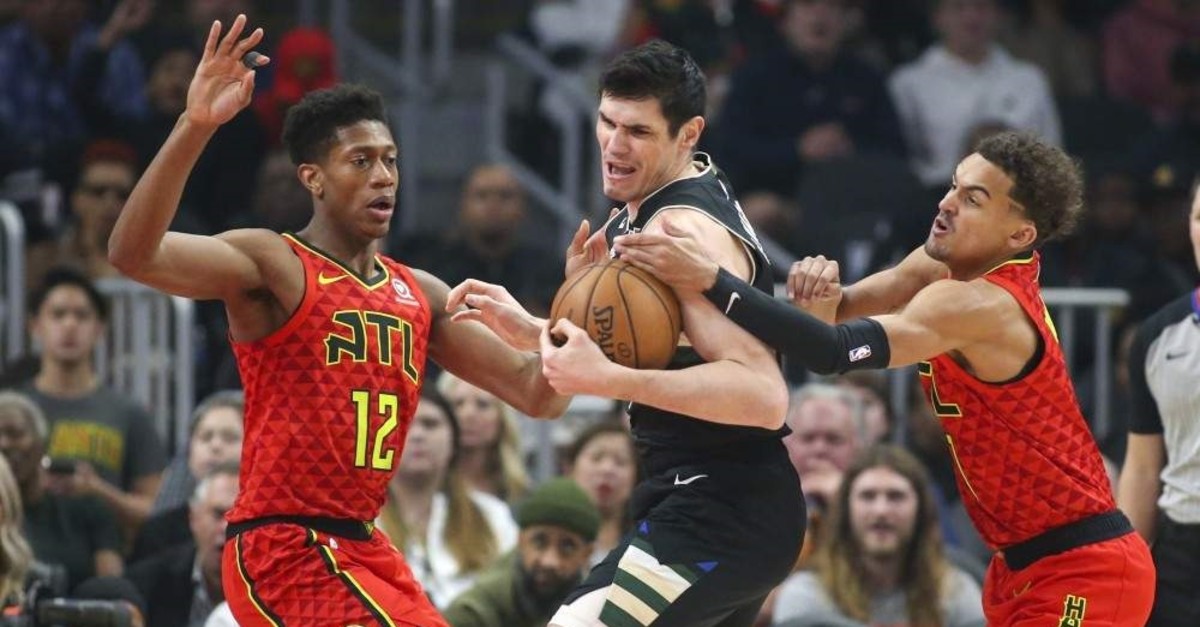 "I think this was a pretty complete game by our group," Milwaukee coach Mike Budenholzer said. "The defense stood out to me in the first half. I think [holding the Hawks to] 40 points at halftime gave us a nice cushion. We kind of could ride that out the rest of the game."

Khris Middleton scored 23 points the Bucks beat the Hawks 112-86, becoming the only team to score at least 100 points in each game this season. The Bucks have hit the century mark in 57 straight.

Antetokunmpo, the league MVP last season and second-leading scorer this season, sat out due to back pain. He watched from the bench as his teammates helped Milwaukee improve to 28-5 overall and 13-3 on the road.

The Hawks lost their ninth straight to drop to a league-worst 6-26. Guard Trae Young, the NBA's fourth-leading scorer, left with a right ankle sprain late in the second quarter. He had to be helped off the floor and was ruled out for the rest of the game.

"Who's stepping up? Who's the next man up?" Atlanta coach Lloyd Pierce said. "Who do we insert in the lineup, who do we insert in rotation and can you impact the game? That's the only spirit we have. It's pro sports. You adjust and you do it."

Atlanta's top scorer was Allen Crabbe, who came off the bench to make four 3-pointers and score a season-high 20 points. Kevin Huerter scored 12 while starting forward John Collins, Atlanta's second-leading scorer, finished with nine points and missed 10 of 14 shots from the field. He had a season-high 16 rebounds.

Ilyasova's 3 at the 6:25 mark of the third put the Bucks up 78-46. With his team trailing by 30 a couple of minutes later, Atlanta's DeAndre' Bembry stole the ball and missed a dunk.

The Bucks have improved to 26-3 since Nov. 1 and are 2-0 without Antetokoumpo, who missed a Dec. 11 win over New Orleans with right quad tendon pains.

Middleton, Lopez and Ilyasova, who started in Antetokounmpo's spot, sat out the fourth quarter with a comfortable lead. Middleton scored a season-high 31 in a loss Wednesday night at Philadelphia. "He's just a special player," Budenholzer said. "We get to see him every day. We're fortunate." Middleton didn't mind filling the offensive void, but hopes Antetokounmpo and injured guard Eric Bledsoe make a quick recovery.

"Just trying to initiate the offense," Middleton said. "I'd much rather have my guys out there with me."

After the game, Antetokounmpo grinned at a reporter who asked if he will play Saturday. "You'll have to ask the medical staff," he said. Bledsoe, the team's third-leading scorer, missed his seventh straight game with a right shin injury. Budenholzer said Bledsoe will be out the next game, too.

Milwaukee has won 10 of its last 11 games against Atlanta and is 3-0 this season to wrap up its third straight season series win over the Hawks. Both teams complete a back-to-back on Saturday. Milwaukee returns home to play Orlando, while Atlanta is at Chicago. Here's a look to other games played on Friday night:

Jimmy Butler scored a game-high 20 points, and Goran Dragic hit the go-ahead shot as host Miami defeated Indiana. There were 20 lead changes in a game that was tight throughout. Miami is now 14-1 at home this season and has won four consecutive games overall. Indiana, which went 3-0 against the Heat last season, was led by Aaron Holiday, who had 17 points and nine assists. The Heat had a 56-34 rebounding edge in the game, including 14-2 on the offensive glass. Neither team attained a double-digit lead at any time over the course of the game.

Evan Fournier scored 20 points, while Aaron Gordon added 19 points and 11 rebounds as host Orlando held on against Philadelphia. Terrence Ross chipped in 17 points off the bench, and Nikola Vucevic collected 16 points, 12 boards and seven assists for the Magic, who improved to 10-6 at home after defeating Philadelphia for the second time this season. Tobias Harris and Joel Embiid each recorded 24 points and 11 rebounds for Philadelphia, which nearly overcame an 11-point deficit in the fourth quarter and saw its three-game winning streak end.

Shai Gilgeous-Alexander scored 27 points and Dennis Schroder added 24 as visiting Oklahoma City won in overtime, aided by Charlotte's missed free throws. The Hornets had a chance to tie the game with 1.9 seconds to play in the extra session, but rookie forward P.J. Washington missed on a pair of foul shots.

Chris Paul, who made a couple of key baskets down the stretch of regulation while playing in his home state, finished with 16 points, and Steven Adams had 14 points and 12 rebounds for Oklahoma City. Terry Rozier's 26 points paced the Hornets, while Graham ended up with 15 points and 13 assists and Washington had 14 points.

Jaylen Brown matched his career-high of 34 points, while Jayson Tatum scored 24 of his 30 in the first half as host Boston cruised to a victory over Cleveland.

Tatum, who also made 5 of 10 from beyond the arc, sank 9 of 13 shots from the floor in the first half and finished 11 of 20 to answer a dismal 5-for-18 performance against the Raptors. Enes Kanter chipped in 14 points and nine rebounds off the bench as the Celtics collected their fifth straight win overall and seventh in a row versus Cleveland.

Kevin Love scored 21 of his 30 points in the first half and made 6 of 11 3-point attempts for the Cavaliers, who had won a season-high three in a row after losing 16 of their previous 18.

D'Angelo Russell recorded 31 points and six assists to help Golden State rally to a victory over Phoenix at San Francisco.

Damion Lee added 16 points, eight rebounds and three steals, and Alec Burks scored 13 points off the bench as the Warriors extended their season-best winning streak to four games. Glenn Robinson III registered 12 points, and Draymond Green had 11 points, seven rebounds and three blocked shots for the Warriors, who won just five of their first 29 games prior to the winning streak.