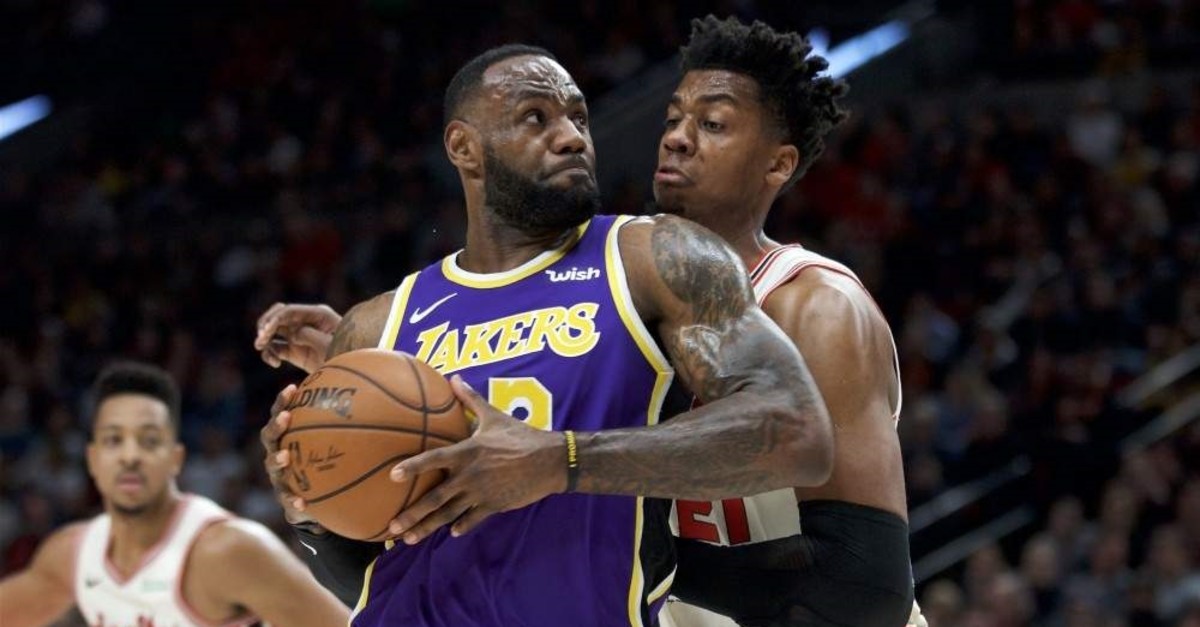 LeBron James drives to the basket around Trail Blazers center Hassan Whiteside during the first half in Portland, Dec. 28, 2019. (AP Photo)
by Compiled from Wire Services Dec 29, 2019 5:59 pm

Kuzma highlighted a strong performance by the Lakers' reserves, who provided 72 bench points. Portland's bench scored 39 points. It was the type of night the Lakers have expected for Kuzma all season as he has battled through several injuries and a reduction in minutes. He scored over 20 points for the second straight game.

"Yeah, I'm just healthy now," Kuzma said after about another strong performance. "I'm confident in my body. I took a little bit of time off, sitting out for five games and really just self-collected what I needed to do and got it done."

Anthony Davis added 20 points and nine rebounds for the Lakers. The win also helped the Lakers move on from a disappointing Christmas day loss to their crosstown rival Clippers.

Coach Frank Vogel said the Lakers needed to clean up the mistakes that caused them to suffer their longest losing streak of the season.

"We got a win and we are all happy about it," he said. "We made some adjustments to things that were hurting us in the last couple of games."

Elsewhere, Kyle Lowry scored 30 points as the Toronto Raptors avenged a Christmas Day loss to Boston with a 113-97 rematch victory over the Celtics.

Serge Ibaka finished with 20 points and 10 rebounds as the Raptors snapped a two-game losing skid which included a 118-102 loss to Boston on Wednesday, as the two Eastern Conference contenders were playing for the second time in less than 72 hours.

Patrick McCaw had 18 points, seven rebounds and eight assists, while a resurgent Fred VanVleet also scored 18 points in the win for the defending NBA champs. Lowry also had seven assists in front of the crowd of 19,100 at the Boston Garden arena.

Kemba Walker scored 30 points for the Celtics, who had their five-game winning streak halted.

McCaw got a layup in the first quarter to give the Raptors the lead and start a quarter ending 19-8 run.

Terence Davis' putback gave the Raptors an 89-79 lead heading into the fourth, and Ibaka's layup with 10:11 remaining lengthened the lead to double digits for good. Toronto led by as many as 17 over the final 12 minutes.

The Raptors were playing without forwards Norman Powell (shoulder) and Pascal Siakam (groin), as well as center Marc Gasol (hamstring).

Also, Luka Doncic tallied 31 points, 15 assists and 12 rebounds to lead the Dallas Mavericks to a 141-121 victory over the hapless Golden State Warriors.

The triple-double was the ninth of the season for Doncic and ties the franchise record set by Jason Kidd in 1995-96. Doncic also made five 3-pointers as Dallas set a franchise record by making 24 from behind the arc. The old mark of 22 took place three times.

Tim Hardaway made six 3-pointers and scored 25 points and Kristaps Porzingis made four 3-pointers while adding 18 points as the Mavericks won for the 15th time in the last 20 games.

D'Angelo Russell scored a game-high 35 points in the loss.

In New Orleans, Brandon Ingram scored 24 points, and a half dozen teammates also scored in double figures as the New Orleans Pelicans cruised past the Indiana Pacers 120-98.

Jrue Holiday added 20 points, JJ Redick scored 15 and E'Twaun Moore and Josh Hart came off the bench to score 11 each for the Pelicans.

Jrue, Justin, and Aaron Holiday became the first trio of brothers to play in an NBA game when Justin checked in for the Pacers with 5:13 left in the first quarter. Jrue started for New Orleans and Aaron started for Indiana.

"It was cool," Jrue said. "What happened was Justin was about to come in and (coach) was about take me out. I told him no I was staying in just because of the moment like that."

Due to the age difference between the brothers — Justin is 30, while Aaron is 23 — the three have never played in the same game before, even as children.
RELATED TOPICS