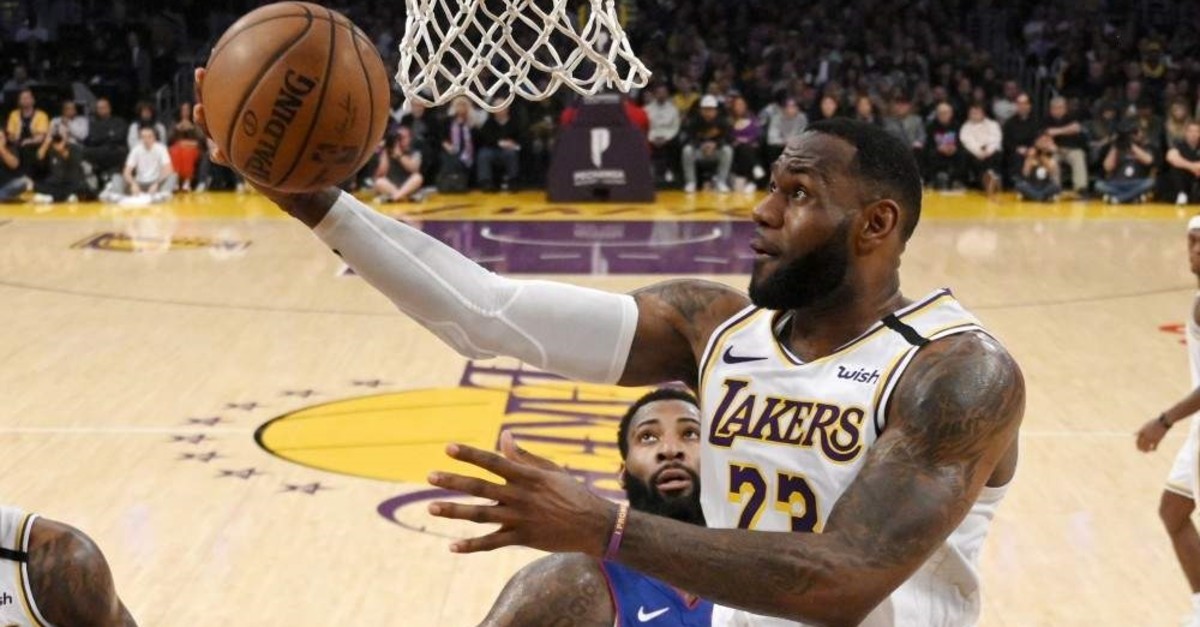 LeBron James produced his ninth triple-double of the season Sunday and the Los Angeles Lakers blocked 20 shots on the way to a fifth straight NBA victory, 106-99 over the Detroit Pistons. Anthony Davis had eight of the Lakers' 20 blocks – which were one shy of the club record set in 1982. JaVale McGee had six and Dwight Howard had five with Avery Bradley adding one. "I think it's a remarkable feat," James said of the blocks. "Dwight, JaVale and AD, they make it easy on us and we try to contain a lot of these small quick guards and these rim attackers."

Davis also added 24 points with 11 rebounds and three steals as the Western Conference-leading Lakers repelled a late challenge from the Pistons and remained unbeaten against teams with losing records. Los Angeles scored the first 15 points of the fourth quarter and led by 11 points with 7:42 remaining, but a 13-1 scoring run put the Pistons up by one point with 4:51 left. A driving dunk by James had the Lakers lead back to four with 3:22 remaining, but Derrick Rose's three-pointer whittled the gap again. Davis responded with a three-pointer and Howard produced the Lakers' 20th block of the night as the Lakers hung on. "We played a heck of a game," James said. "This team came in and they played extremely hard. They were super well-coached and they did a heck of a job of taking us out of a lot of things we wanted to do offensively and we just tried to do the same to them."

The Minnesota Timberwolves, bolstered by the return from the sick list of Andrew Wiggins, squandered a 25-point second-half lead before coming up with a 118-103 victory over the Cavaliers in Cleveland. Cleveland's Dante Exum scored 24 of his 28 points in the second half, when the Cavaliers put together a 30-4 scoring run to seize a one-point lead with 8:26 left to play. But Minnesota answered with a 13-point run that included two three-pointers from Gorgui Dieng to salvage the victory – and win back-to-back games for the first time since November. All five Timberwolves starters scored in double figures, led by Dieng who had 22 points, 13 rebounds, six assists and four blocked shots. The Cavs also saw rookie forward Kevin Porter Jr. depart with a knee injury in the third quarter. He had crumpled to the court after he appeared to get stepped on attempting to make a spin move against Robert Covington. The Cavs had no immediate post-game update on his condition, but he left the arena on crutches.

The Miami Heat took its league-best home record to 17-1 with a 122-111 victory over the Portland Trail Blazers. At 26-10 overall, the Heat is third in the Eastern Conference led by the Milwaukee Bucks. Goran Dragic came off the bench to lead the Heat with 29 points and 13 assists. Bam Adebayo added 20 points and the Heat never trailed despite the absence of Jimmy Butler with a sore back. "It doesn't matter for us who's playing or not," Dragic said. "We don't use excuses." Former Heat center Hassan Whiteside was booed whenever he touched the ball in his return to Miami for the Blazers but finished with 21 points and 18 rebounds.

The NBA day that ended with the Lakers win at Staples Center opened with the Los Angeles Clippers' 135-132 victory over the New York Knicks on the same court. Montrezl Harrell came off the bench to score 34 points, leading a trio of Clippers players who scored more than 30. Paul George and Lou Williams added 32 points each as the Clippers erased the sour taste left by a home loss to the lowly Memphis Grizzlies. It marked the first time in the club's 50-year history that three players scored at least 30 points.