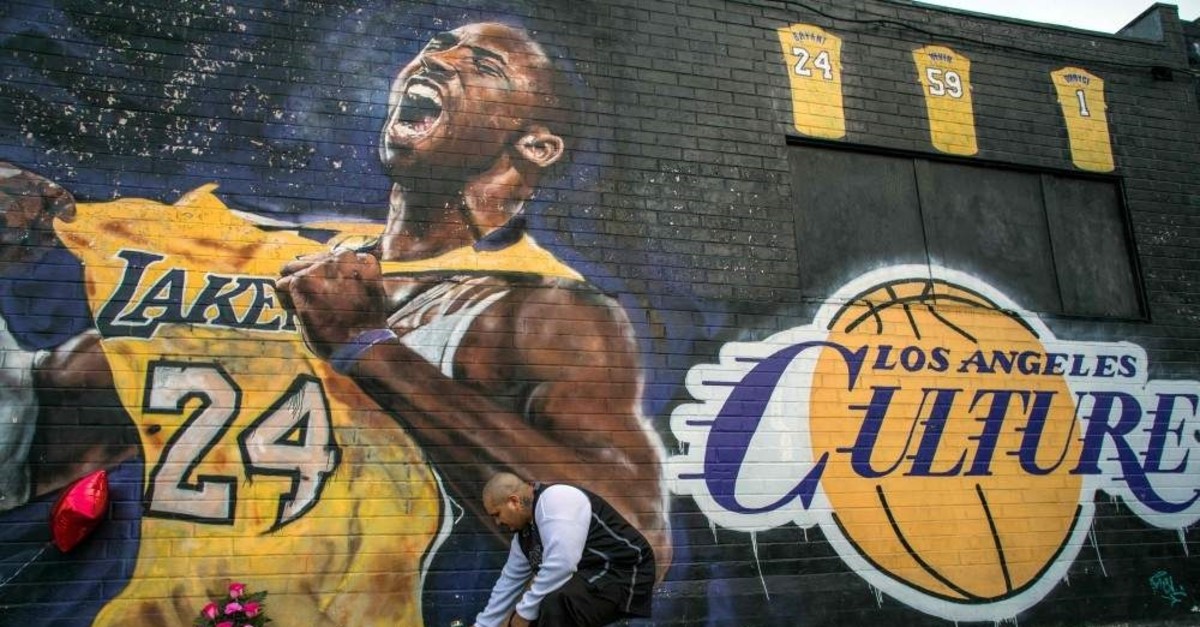 Tributes poured in from around the basketball, entertainment and political worlds as the sudden death of NBA legend Kobe Bryant sent shockwaves across the globe, leaving fans and colleagues grappling with the tragic news

NBA legend Kobe Bryant, his daughter and seven others were killed Sunday when their helicopter plunged into a steep hillside in dense morning fog in Southern California, his sudden death at age 41 touching off an outpouring of grief for a star whose celebrity transcended basketball.

The chopper went down in Calabasas, about 30 miles northwest of downtown Los Angeles. Authorities said nine people were aboard and presumed dead. Bryant and his 13-year-old daughter Gianna were among the victims.

News of the charismatic superstar's death shook the sports and entertainment worlds, with many taking to Twitter to register their shock, disbelief and anguish.

"Words can't describe the pain I am feeling. I loved Kobe – he was like a little brother to me," retired NBA great Michael Jordan said. "We used to talk often, and I will miss those conversations very much. He was a fierce competitor, one of the greats of the game and a creative force."

All around the world, people were glued to their phones and television screens as news of the crash spread and networks broke into programming with live coverage. A visibly shaken LeBron James wiped his eyes with tissues and walked away alone from the Lakers plane that had just landed in Southern California.

News of Bryant's death inspired an outpouring of grief around the sports world and beyond, but it was felt particularly painfully in Los Angeles, where Bryant was unquestionably the sprawling city's most popular athlete and one of its most beloved people. Buildings from downtown to Los Angeles International Airport were illuminated in Lakers purple and gold.

Bryant had one of the greatest careers in recent NBA history and became one of the game's most popular players as the face of the 16-time NBA champion Lakers franchise. He was the league MVP in 2008 and a two-time NBA scoring champion. He earned 12 selections to the NBA's All-Defensive teams.

"There's no words to express the pain I'm going through with this tragedy of loosing my niece Gigi & my brother @kobebryant," O'Neal wrote on Twitter. "I'm sick right now."

A two-time Olympic gold medalist with the dominant U.S. team, Bryant retired in 2016 after scoring 60 points in his final NBA game. In December 2017, the Lakers hung banners retiring his No. 8 and No. 24 jerseys in the Staples Center rafters in an unprecedented double honor.

Thousands of people gathered to mourn Bryant outside the Staples Center in downtown Los Angeles. Mourners in No. 24 jerseys mixed with those in fancy dress arriving at the downtown arena for Sunday evening's Grammy Awards.

"We laughed and joked about the Mamba mentality. We're all going to need it right now," Clippers coach Doc Rivers said through tears before his team played in Orlando.

Bryant played twice against Rivers and the Celtics for the championship, with Boston winning in 2008 and the Lakers taking the 2010 title when Bryant captured his second consecutive NBA Finals MVP award.

"We always liked to reminisce. We would always laugh at our versions of our losses," Rivers said. "You know, when we beat them in 2008, he had his version. And when they beat us in 2010, I had my version, and then we would laugh at how different we looked at the games."

Pau Gasol, a former teammate of Bryant's during those series, tweeted, "Beyond devastated... my big brother... I can't, I just can't believe it."

The Lakers and Celtics already had the NBA's most famous rivalry, but it had been dormant since the heydays of Magic Johnson and Larry Bird before Bryant helped lead its resumption.

Johnson, just days after giving an emotional speech during a memorial service for former NBA Commissioner David Stern, was devastated again after Bryant, 41, and his 13-year-old daughter Gianna were among those killed in Southern California.

"As I try to write this post, my mind is racing," Johnson wrote on Twitter. "I'm in disbelief and have been crying all morning over this devastating news that Kobe and his young daughter, Gigi have passed away in a helicopter crash. Cookie and I are heartbroken."

Bryant also helped the U.S. win Olympic titles in 2008 and 2012, after the Americans had been shut out of gold medals in major international basketball competitions since 2000.

"He was in constant pursuit of doing something special, and there will never be a greater warrior in our sport," said Mike Krzyzewski, who coached Bryant on those teams after trying to recruit him to Duke.

Players around the NBA honored Bryant by holding the ball for 24 seconds – one of his jersey numbers – for a 24-second shot clock violation at the start of games. Hawks All-Star guard Trae Young, who usually wears No. 11, wore Bryant's other number Sunday night, No. 8, before Atlanta's game against the Wizards. He changed back to his own number for the game.

In another tribute to No. 24, soccer star Neymar held up two fingers on one hand and four on the other during a celebration after a goal.

Philadelphia 76ers center Joe Embiid said that he started playing basketball after watching Bryant in the 2010 NBA Finals. "I had never watched ball before that and that finals was the turning point of my life," Embiid wrote on Twitter.

Tiger Woods was told of Kobe Bryant's passing by his caddie Joey LaCava coming off the 18th green at Torrey Pines on Sunday at the Farmer's Insurance Open.

"Joey just told me coming off 18th green," Woods told CBS. "I didn't understand why the people in the gallery were saying, 'Do it for Mamba.' But now I understand. It's a shocker to everyone. Unbelievably sad and one of the more tragic days."

And not only for fellow athletes. Bryant had been busy in the arts after retirement as a player and quickly became successful.

"Kobe was a legend on the court and just getting started in what would have been just as meaningful a second act," former President Barack Obama tweeted. "To lose Gianna is even more heartbreaking to us as parents. Michelle and I send love and prayers to Vanessa and the entire Bryant family on an unthinkable day."

'Much more than an athlete'

Former Lakers star Kareem Abdul-Jabbar tweeted that: "Most people will remember Kobe as the magnificent athlete who inspired a whole generation of basketball players. But I will always remember him as a man who was much more than an athlete."

"He was not only one of the greatest basketball players ever, he was also the hardest working player I've ever been around," Boeheim tweeted. "I was so fortunate to have known him and coached him with Team USA. Our thoughts and our prayers are with his wife, Vanessa, and the Bryant family."

Bryant's death reverberated beyond sports. In 2018, he won an Academy Award in the animated short film category.

Gavin Newsom, the governor of California, and First Partner Jennifer Siebel Newsom issued a statement about Bryant that read:

"We mourn the tragic and untimely death of a California icon and basketball legend, Kobe Bryant. In his 20-year career with the Los Angeles Lakers, he made history with raw talent and unparalleled dedication that raised the bar and paved the way for a newer generation of players."