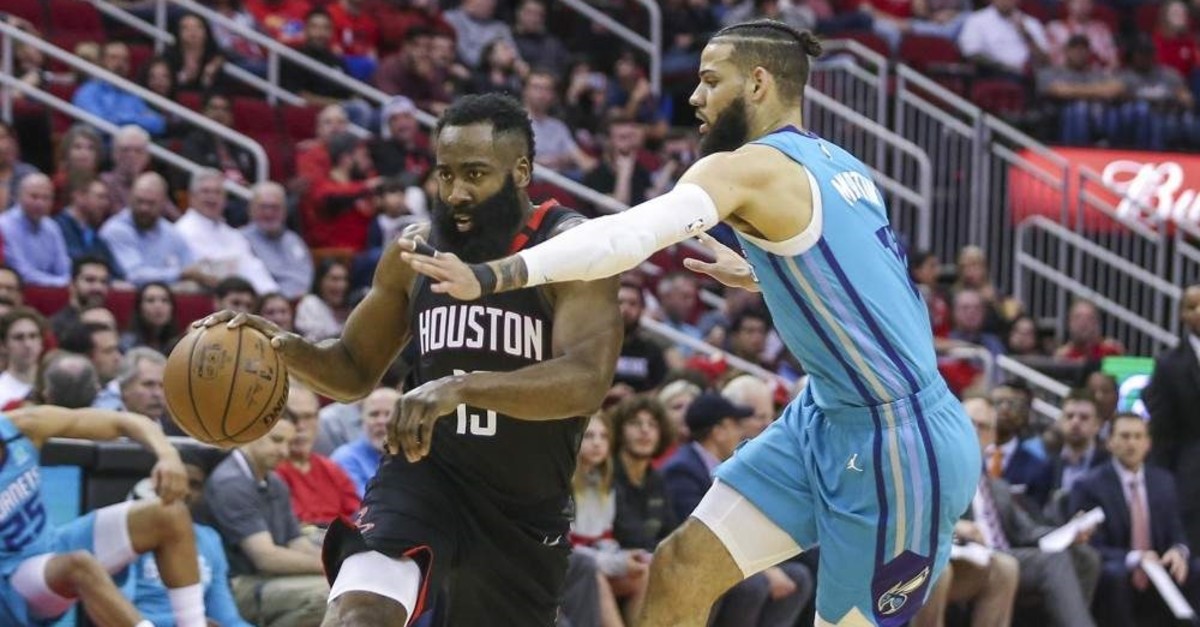 James Harden finished one rebound shy of a 40-point triple-double, and the Houston Rockets erased a 15-point deficit to beat the visiting Charlotte Hornets 125-110 Tuesday.

Harden was exceptional throughout the game but especially down the stretch, fueling a 12-3 run in the fourth quarter that enabled Houston to secure control. Harden hit a 3-pointer, converted a floater in the lane and fed Danuel House Jr. for a transition alley-oop en route to 40 points and 12 assists to help Houston win despite the absence of Russell Westbrook (thumb) and Clint Capela (heel).

Miles Bridges and Terry Rozier scored 20 apiece for the Hornets, who have dropped four in a row and 12 of their past 13 games. Bridges added a game-high 15 rebounds. Malik Monk scored 19 off the bench for Charlotte while Devonte' Graham produced 16 points and 10 assists.

There was no mystery behind the Hornets' early success. Charlotte led by as many as 13 points in the first quarter due to its prowess on the glass. The Hornets posted a 20-9 rebounding advantage in the period, grabbing seven offensive boards.

Charlotte benefited from the Rockets shooting just 36.4% in the opening quarter, but Houston incrementally clawed back in the second by drilling six 3-pointers and going 12 of 12 at the free-throw line. Harden had nine of those foul shots as Houston rolled to a 40-point frame.

However, it wasn't until 1:59 remained in the second that the Rockets finally claimed their first lead with Harden feeding House for a transition layup and a 59-58 advantage. But Cody Martin scored five points in succession, and the Hornets reclaimed a 63-62 lead at the intermission.

Giannis Antetokounmpo had 34 points and 17 rebounds, and visiting Milwaukee used a third-quarter surge to pull away from New Orleans.

The Bucks trailed for most of the first half and were down 61-58 at halftime before outscoring the Pelicans 42-24 in the third quarter. Antetokounmpo scored 16 in the period. Fellow All-Star Khris Middleton added 20 points for Milwaukee.

LeBron James scored 19 of his 36 points in the fourth quarter while hitting five 3-pointers in an incredible three-minute span, propelling the Los Angeles Lakers to a 129-102 victory over the San Antonio Spurs Tuesday night.

James added nine assists and seven rebounds, and he hit five of his six 3s in that decisive barrage. Anthony Davis and Kyle Kuzma had 18 points apiece as the Lakers beat San Antonio for the third time this season, sweeping the season series.

Kuzma, the subject of numerous trade rumors with the deadline approaching, added 12 rebounds in one of his most impressive recent performances.

DeMar DeRozan had 28 points, nine rebounds and seven assists in his hometown for the Spurs, who have lost five of seven.

Nikola Jokic had 29 points, 13 rebounds and nine assists, Jamal Murray scored 20 in his return to the lineup after missing 10 games and host Denver beat Portland.

Jerami Grant scored 17 points, Will Barton added 16 and Malik Beasley scored 14 for the Nuggets, who have won all three meetings with Portland this season. Denver won for the third time in four games overall.

Damian Lillard was held to 21 points, his lowest output since Jan. 9, and CJ McCollum had 20 for Portland. The Trail Blazers had their four-game winning streak snapped.