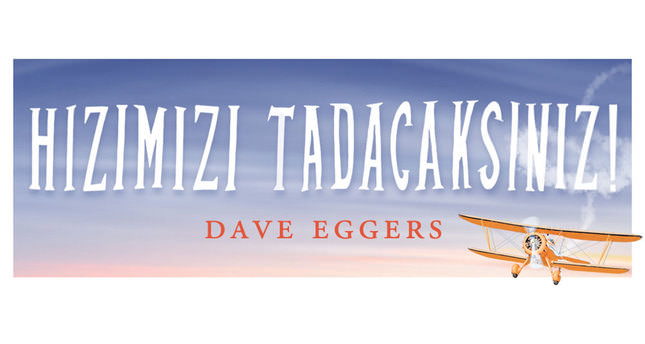 by Kaya Genç Mar 25, 2014 12:00 am
There is nothing better than an American author with avant-garde sympathies. Just look at Dave Eggers. He is a novelist, publisher and the founder of McSweeney's and The Believer, two of the most exciting magazines of the last decade. Eggers had been writing and publishing books with a strong anti-establishment vein for some time. He is famous for his cross-genre novels as well as a number of experimental book productions, such as the fur-covered novel "The Wild Things," a copy of which you can find in Istanbul's bookstores.

Though for Eggers, avant-garde does not only mean formal and stylistic experimentalism. It is more a way of being truthful to life's unpleasant realities. Since the late 19th century avant-gardists had often favored the artificial over the natural. Unlike Oscar Wilde and Charles Baude-laire, those preachers of artificiality, Eggers is seeking new forms of truth-telling. His status as an avant-garde artist becomes most visible in the U.S., that land of ultimate artificiality, where the con-temporary avant-gardist has to struggle against artificiality to be considered worthy of that name.

"You Shall Know Our Velocity," which was published in Turkish this month, is Eggers's de-but novel. His first book was the autobiographical "A Heartbreaking Work of Staggering Genius." The two books couldn't be more different. "Velocity" discusses disturbing truths about the United States' role in the Middle East and Africa. "Staggering Genius" chronicles Eggers's youth when, in the course of five weeks, he lost both his parents to cancer.

Although "Velocity" is a topical and energetic work, it is not Eggers's best book. In fact it may be his least successful one. Eggers uncharacteristically tries to stay in the confines of his ar-tistic medium (the novel) and this reluctance to trespass somehow works against him. On the face of it his story of two friends who win $80,000 playing the lottery promises exciting fictional opportu-nities. The protagonists attempt to give away their little fortune during a week-long journey around the world. Their trips to numerous third world countries give rise to a critique of U.S. foreign policy as well as the narrow-mindedness of some of that country's citizens.

The problem with "Velocity" is that it is too fantastic, too fast and, well, too fictional. In his 2006 book, "What is the What," Eggers undertook the more interesting job of writing the autobiog-raphy of a Sudanese refugee. "What is the What," also available in Turkish, was a bold mixture of truth-telling and fiction.

Eggers's books defy easy categorization. "The Wild Things," a 2009 novel inspired by Mau-rice Sendak's legendary picture book "Where the Wild Things Are," is a case in point. Eggers also penned the screenplay of Spike Jonze's film adaptation from the same book but his most success-ful work to date was perhaps "A Hologram for the King." The central themes of that novel were the tension between artificiality and nature and the elusive nature of reality. In all these works Eggers sustained a rebellion against the confines of literary genre and form. That had been the factor that made his books so successful. In contrast, "Velocity" reads a little like a prank.

In the first edition of "Velocity" he had the first paragraph printed on the book's cover. This is typical of Eggers who is known for his fascination with such games. In "Staggering Genius," the book form was having a difficult time containing the self-proclaimed staggering genius of its author.

The problem with "Velocity" seems to be related to the pacing of its narrative. The book's fleeting sentences constantly make one feel left behind. The narrator and the characters move so swiftly that you just can't catch up to them. One might say that globalization makes us feel the same way but this fast-paced novel is less an analysis of the globalization phenomenon than a product of it.