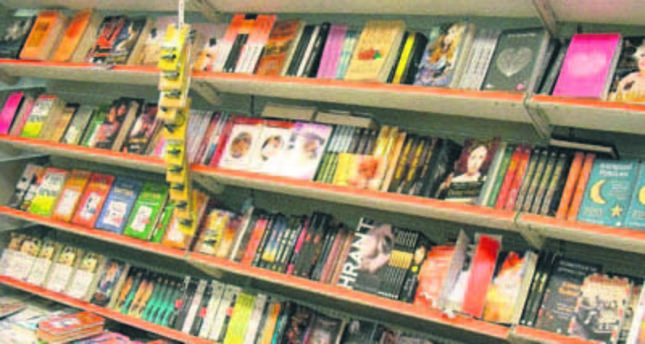 by Kaya Genç Apr 12, 2014 12:00 am
ISTANBUL — I was walking in a shopping mall in Şişli the other day when I decided to treat myself to a chocolate bar. I entered one of the largest supermarkets in the city, and after spending half an hour there I came out with books by Beşir Ayvazoğlu, Ayşe Kulin and Khaled Hosseini placed inside my tote bag. You may wonder what happened to the chocolate bar. Well, I forgot to buy it.
Admittedly, I spent ten times the money I was planning to spend on snacks (TL 30 versus TL 3).

But eventually I decided that spending TL 30 had been worth it. Buying books from a supermarket had turned into this important moment in my life.

It was something akin to learning to ride a bike. Let me explain.

In my youth, cultured people in Turkey despised the idea of having books sold next to detergent boxes in supermarkets. Book advertisements were a taboo subject which often got the advertised author into serious trouble. Writers were asked to disappear from public life and take refuge in distant towns on Anatolian mountains. Authors who insisted on talking about their books were branded as spineless pseudo-intellectuals betraying their craft, history and nation.

It was often journalists, public intellectuals and book critics who did the bullying. Lucky enough to be compensated for their own work, they managed to frighten the younger generation off by portraying the perfectly normal process of selling books to readers as an evil practice. Creativity, success and literary career came to be seen as swearwords thanks to the efforts of this cultural old guard.
In fact, earning money from her work is the writer's most natural right.

Since the first moment they emerged on earth, writers sold their work to those willing to pay and there is little shame in getting paid for one's work. Anyone who tries to take that right from the writer deserves the punishment of public humiliation, in my humble opinion.
On the other hand, selling books in supermarkets seemed to me like a combination of all the sins I have been warned about in my youth. I guess the only thing more offensive for those puritan preachers would be a book signing near the fruit and vegetable department.
Walking toward the books and magazines section, I saw Ayvazoğlu's book, "Bozgunda Fetih Rüyası," on one of the shelves. I looked around me before picking it up. It felt very, very wrong to read in a supermarket. As I browsed through its pages I realized that the book was a fictionalized biography of the great Turkish poet, Yahya Kemal, and his generation of early 20th century writers.
A woman came near me with a deodorant in her right hand. She looked at me and the book, left the deodorant near the newspapers and walked away.

As I finished reading the first paragraph, I knew that I wanted to take the book home with me. Finishing it among toys, stationery items and that abandoned deodorant would do a grave disservice to this obviously well-researched and wellwritten book. Kapı Yayınları published it at a very affordable price. I often pay TL 30 for paperbacks that resemble boring textbooks of my school years.
I was more than happy to pay TL 9.90 for a stylish and portable book. I found other books, too: "The Kite Runner" by Hosseini and Kulin's "Dönüş." I walked among shopping baskets filled with meats, bags of cat litter and boxes of Corn Flakes. I carried those books with me to the self-checkout section.

I love using those systems. I have lately made a habit of buying newspapers this way. I scan their barcodes and pay with my credit card. This time the price was a bit high but this was normal. I was buying books that would stay with me for years to come. As I left the mall I wished they installed those machines in hip bookshops in Beyoğlu. Maybe they will. After my shopping experience in the supermarket, I realized that many people bought those TL 9.90 books. On their way back to their apartments from a long day at the office, people visit their local supermarket and after ticking all the boxes on their grocery lists, choose a book to bring home. It is the icing on the cake. Reading about Afghanistan or the Ottoman Empire or Turkish poets is surely healthier for us than treating ourselves to snack food. Maybe a chocolate bar can wait, but books can't.
Last Update: Apr 12, 2014 2:32 am
RELATED TOPICS