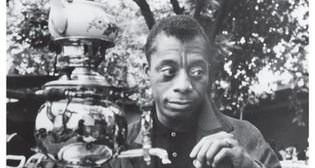 by Kaya Genç May 03, 2014 12:00 am
ISTANBUL — August 2 will mark the ninetieth anniversary of the birth of James Baldwin, the great American writer who was a frequent visitor to Istanbul.

Baldwin enjoyed living in the city and he also visited Anatolia, which he found fascinating. He spent most of his time in Turkey between 1961 and 1971. He finished three novels here: "The Fire Next Time," "Another Country" and "No Name in the Street."

Love is an important word in Baldwin's life and work. He wrote beautifully about love and perhaps it was love more than anything else that gave shape to his life. I remember falling in love with Baldwin's work while reading "Giovanni's Room" as a graduate student. Here was a writer who showed how we were destined for a sad and tragic life when we ignored, or resisted, love.

To be honest, I didn't know much about Baldwin's life in Istanbul until last month. One evening in April, by sheer chance, I found myself in the film theater Atlas in Beyoğlu where the expectant audience of the Istanbul Film Festival was waiting for the screening to begin. A friend of mine had given me the ticket and apart from the film's title "Off-White Tulips" (which I found very intriguing) I knew next to nothing about the film. After the lights dimmed I saw a photograph of Baldwin. But the photograph was not taken in Harlem, Baldwin's birthplace, or in another part of the U.S., Baldwin stood on the Galata Bridge, looking at Istanbul's mosques. He was quite close to the seat in which I was watching the documentary.

But how did Baldwin come to Istanbul? He was already acquainted with the great Turkish actor Engin Cezzar from his New York years.

In 1956, Cezzar had played Giovanni in a stage production of Baldwin's novel. Five years later, it was Cezzar's turn to play host to Baldwin.Cezzar and his wife, the actress Gülriz Sururi, took Baldwin to parties and introduced him to Istanbul's artistic community. The city offered Baldwin (he was in his late thirties at the time) new experiences that were different from the racist, sexist attitudes he had encountered in New York, a supposedly progressive city. Baldwin saw how the state in the U.S. supported social discrimination against the poor; in Turkey he found a more relaxed attitude toward sexuality and black people. Although he was once severely beaten in Erdek, a resort town on the southern coast of the Marmara Sea, the villagers came to his rescue and punished the assailant by beating him.

But "Off-White Tulips" is not only about Baldwin's experiences in Turkey, which the film presents through a set of still pictures (the director's own hands move them across the screen).Director Aykan Safoğlu also talks about his own experiences as a child growing up in the 1980s.He shows us photographs from his childhood and paints a picture of the era's ethos. Safoğlu never met Baldwin in person but he is a big fan of his work. His main source on Baldwin's Istanbul years is Magdalena Zaborowska's book, "James Baldwin's Turkish Decade."

Watching "Off-White Tulips" felt like reading a personal and confessional essay. As we see Baldwin inviting his American friends to the city (Marlon Brando among them) to share the pleasures offered by Istanbul, we get a sense of how important it is to lead a life of love and pleasure. Brando and Baldwin, two important figures of the civil rights movement in the U.S., see in Istanbul an alternative to the oppressive rationalism of their own country.

In her book, Zaborawska beautifully sums up Baldwin's experiences in Istanbul: "He was noticed because he was black," she writes, "but he was left alone because he was American." This is perhaps what most artists want to have: being noticed and left alone, the best of both worlds.