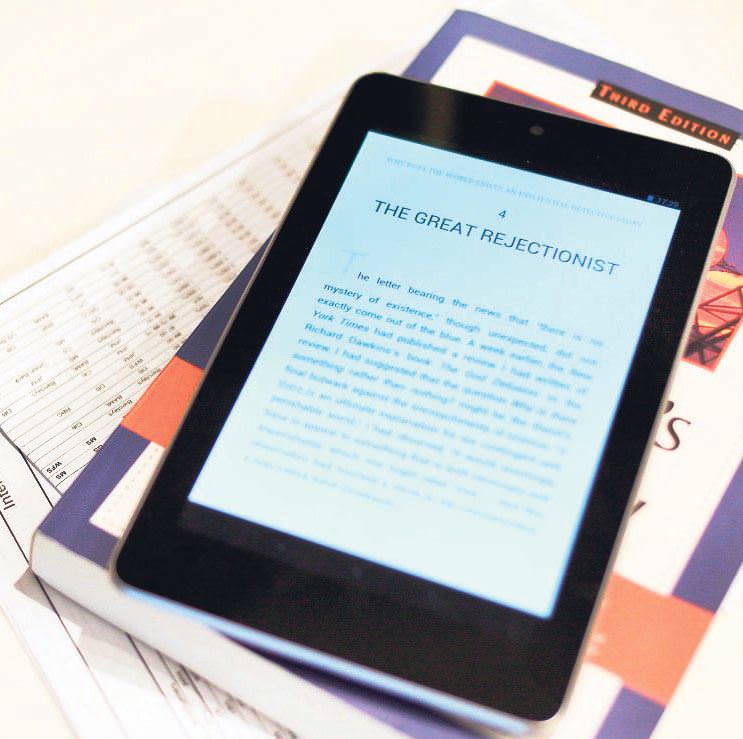 After all, my interest in gadgets was surpassed only by my love for books. To my mind, books resemble gadgets and gadgets resemble books; novels are little different from video games that, in numerous ways, resemble novels. So when I adopted a digital-only reading diet last year, I didn't feel uneasy in the least. Reading Karl Ove Knausgaard's books alongside the latest issues of newspapers and magazines on a tablet screen would surely be an awesome experience.

But the experience turned out to be quite a tasteless one. I am what you may call a heavy reader. My job involves reading numerous things, and I do my duty with pleasure. The problem with my digital-only reading diet was its centralized nature.

It stopped me from enjoying differences between different kinds of texts. For example, I love reading the Talk of the Town columns of the New Yorker magazine. Those short pieces about artists, entrepreneurs, actors and all sorts of interesting personalities make great reading in the subway. Upon reading one of those pieces and moving to, say, a scholarly book by Edward Said, I can't help but feel that my tablet's screen somehow still retains the New Yorker's sarcastic tone. Reading Said somewhere else, somewhere physically different, seems like the right thing to do.

Of course, the easy solution to my problem would be to purchase both the magazine and the book in print so that they become objects safely keeping their physical distance from one another.

But I wanted to find a digital solution to the problem and I came up with the following. If I read the New Yorker on my iPhone, the Knausgaard volumes on my Sony Reader and use my iPad Mini only to browse through news, I have a much clearer focus on what I read.
Is this a good solution? I believe it is. It is better to associate certain devices with certain types of text. The shape of iPhone's screen is perfectly suited to read the New Yorker columns while Sony Reader is ideal for reading longer works because the device uses e-ink technology and does not tire the eye. As for the newspaper reading pleasure, the tablet seems like the better choice with its large, comfortable and bright screen.

In a 2012 essay for the New York Review of Books, the British novelist Tim Parks had defended the e-book format and called it "a medium for grown-ups." Those who insisted on the pleasures of the printed page were acting like children, according to Park's rather Kantian argument (Kant had defined "enlightenment" as mankind's release from its self-incurred immaturity). Park pointed to how e-readers offered "a more austere, direct engagement with the words appearing before us and disappearing behind us than the traditional paper book offers (...) It is as if one had been freed from everything extraneous and distracting surrounding the text to focus on the pleasure of the words themselves."

My main objection to the "e-reading-equalsmaturity" argument is that texts had never been presented to readers in the centralized way that they are being presented today. If this is the mature way of reading texts then I should say maturity has a stale taste. In the past, texts had often reached us through certain physical separations; books and magazines and newspapers are different objects that we love for their differences. The idea of removing those differences in the name of maturity is a bit problematic.

As the French Algerian philosopher Jacques Derrida tirelessly pointed out, difference is the key concept in discussions about identity. I suspect that it may also be the key concept in the discussion about our reading habits. On a practical level, my change of diet resulted in a major difference: in my much heavier tote bag I now carry a number of gadgets, as befits a bookish nerd.
Last Update: May 12, 2014 1:14 am
RELATED TOPICS