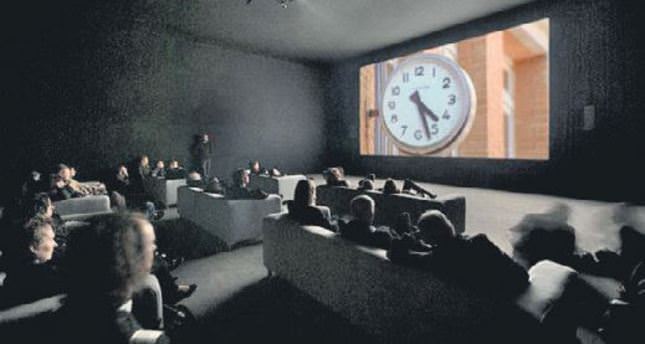 by Kaya Genç Jul 07, 2014 12:00 am
Last May, SALT Beyoğlu showed one of the most amazing examples of experimental cinema at its location on İstiklal Avenue. Between May 9 and May 25 visitors had the chance to watch Christian Marclay's "The Clock," which The Guardian has praised as "a masterpiece of our times" when the film was shown in London's Hayward Gallery. If you visited the theater at SALT Beyoğlu on those days, you may have seen me sitting or lying on one of the comfortable couches where I enjoyed the film alongside fellow Cihangir residents, who had flocked to SALT to watch "The Clock" around the clock.

Marclay's film is a montage of thousands of films where clocks, wristwatches or film dialogue constantly tell us the time so that the film serves like a proper clock that never stops unless you stop watching. The film lasts for 24 hours and if you did not spend a full day at SALT Beyoğlu then you can't boast about seeing it in its entirety. But of course, in another sense, you have seen it all before, since there is nothing new in the film. All the scenes have been taken from classic films and modern masterpieces (from "Back to the Future" to "After Hours").

In 2011, The Guardian newspaper attempted to transform "The Clock" into literature and asked its readers to help with an ambitious project to compile a huge database where every minute of the day would be represented by sentences from novels written in or translated into English. The total number of minutes in a day is 1,440, but the literary clock project failed to represent all of those minutes.

The readers had a difficult time finding sentences that describe the early hours of the day. The first sentence of the project (00.00) is from "Infinite Jest" by David Foster Wallace: "Gately can hear the horns and raised voices and U-turn squeals way down below on Wash. That indicates it's around 0000h., the switching hour." If it is printed in book form, this collection of sentences will give us the chance to read a book for the practical reason of learning the time. Nevertheless, the concept has little chance to work as smoothly as it does in film format. You can read slowly or finish five pages in 10 seconds - but you can't watch Marclay's film any faster than seconds tick away.

These initiatives reminded me of clocks in our literature. You surely must have heard Ahmet Hamdi Tanpınar's "The Time Regulation Institute," which can be described as a novel devoted to clocks and the notion of centralized time. In Orhan Pamuk's "The New Life," one of the main characters, Dr. Narin, has four spies named after watch brands. According to an argument in the book, the clock is the only Western technology that was successfully adapted to traditional life in Turkey during the period of Westernization as it has helped people remember prayer times. During Ramadan, believers eye their watches expectantly - it has become an integral part of the lives of the devout.

Just look at Turkey's clock towers to remember the Ottoman sultans' fascination with time. Popularized in the Ottoman Empire during the 19th century, dozens of clock towers popped up in the empire. Abdülhamid had ordered the erection of 144 clock towers, not all of which have survived. Writers like Şule Gürbüz, a horologist at Topkapı Palace, have explored the rich tradition of clocks and timekeeping in Ottoman culture in their books. Ottoman clock masters, like Şeyh Dede, Ahmet Eflaki Dede and Süleyman Leziz Bey, provide interesting material for the novelist. To go back to our literary clock, which Turkish book would provide the first sentence of such a project? I wonder. Do sentences about time appear more frequently in contemporary fiction or in Ottoman novels from the 19th century? Which Turkish author is most obsessed with the idea of time? I wish I could answer all these questions. If only I had the time.
Last Update: Jul 07, 2014 1:13 am
RELATED TOPICS