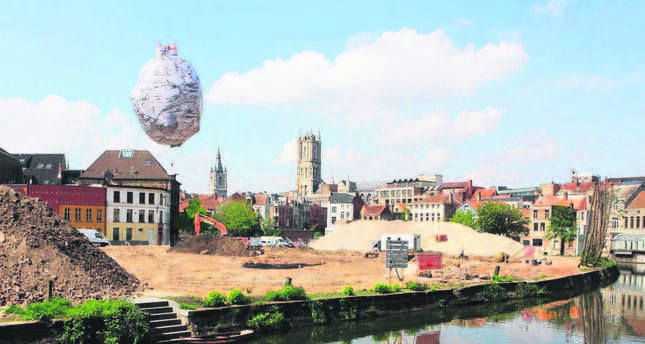 by Özlem Sakin Jul 07, 2014 12:00 am
The Diyarbakır-born Turkish artist Ahmet Öğüt is a well-known, reputable name with exhibitions held in various countries and continents, from the U.S. to Australia. Practicing his art in Istanbul, Amsterdam and Berlin, Öğüt now has a book out called "Tips and Tricks," which is an extensive documentation of his works over the past 10 years.;

Published by Mousse and launched at Art Basel art fair last week, the book provides insights to the works of Öğüt, who along with winning various awards in Europe is also the founder of Silent University - an autonomous knowledge exchange platform designed by and for refugees, asylum seekers and migrants.

We discussed his recent success and what plans Ahmet Öğüt has for the future.

Daily Sabah: How did the book project (the book) first come to life? Was it a challenge selecting which ones to include among your many works in the book since the selection of works and writing the "monograph" is usually the job of a curator?

Ahmet Öğüt: First there was an invitation from an institution to make a book in a traditional catalogue format and I decided that I did not want another catalogue and I took initiative to make a book, a very specific kind of book. Along the way other institutions and individuals came together to make it happen, people that I have worked with on many occasions.

DS: How did you build up the team, can you tell us about the process and what were the drawbacks and the advantages of teaming up with people from literally all around the world?

AÖ: It was a very organic process. For instance, the two interviews, one with Ute Meta Bauer, the other with Hans Ulrich Obrist, happened last year on two different occasions, both focusing on the more pedagogical aspect of my practice. The main text is by Adnan Yıldız, who was also supportive of the book through his institution, Künstlerhaus Stuttgart, and with whom I have worked several times. The book was edited by Ceren Erdem, curator and friend, based in New York - for many, many years we have been following and supporting each other's practice. There was substantial support also from Ayşe Umur with printing and Mari Spirito to moderate the talk and book's launch at Art Basel with Chus Martinez.

DS: You mentioned in an interview at Art Basel that you see it as a "timeless book?" Can you explain to our readers what you mean by "timeless" - that it will always be out there unlike pieces showcased in an exhibition which might get locked up away from the eyes of the audience? AÖ: A book, in a very different way from a catalogue, is a space in itself, one that is independent from occasion and location. A book has the ability to remain valid for a very long time, beyond the present and exist in a timeless context.

DS: When you look back at the work you created in the past 10 years, how do you see your art evolve? Was it a journey of selfdiscovery and what was it like having to categorize your work (naming the chapters, et cetera)?

AÖ: It is important to look back at the practice when the time comes. We ourselves turn into archives. One should organize in order to be able to think about the past, present and future together. Defining the titles of the chapters was a very important process for me which helped me discover things about my own practice that I would not have been able to see if I was not reflecting this way.

DS: I'm not going to ask what the next step for you is as I believe you plan to open an artist school in Istanbul. Can you tell us more about this project which you are considering to kick off this summer? And if possible, give us a bit of inside information about where, how and when it will take place.

AÖ: Ha, you are not asking me but you are asking me! I can tell you that my next confirmed long-term project will take place in the U.S. as a collaboration with Protocinema; a transnational, site-aware art organization that has exhibited my work in New York in 2012 (www.protocinema.org) and the Eli and Edythe Broad Art Museum, at Michigan State University with support from SAHA. As you know, the cost of higher education is out of reach for most people and the industry of Student Loans has become a major concern and issue.

My project is called "Day After Debt" and is collaborative on every level - along with myself and Krzysztof Wodiczko, Martha Rosler, Superflex and Dan Perjovschi, we will design and produce a series of sculptures that will function as collection boxes and/or coin operated machines that will serve as receptacles for public contributions. Collected money from the sale or loan of these sculptures will go to a student loan relief fund. The funds form the "Day After Debt" will be deposited into the student public loan relief fund and seeks to raise awareness of the extremely high cost of education in the U.S. and elsewhere.
Last Update: Jul 07, 2014 10:44 am
RELATED TOPICS