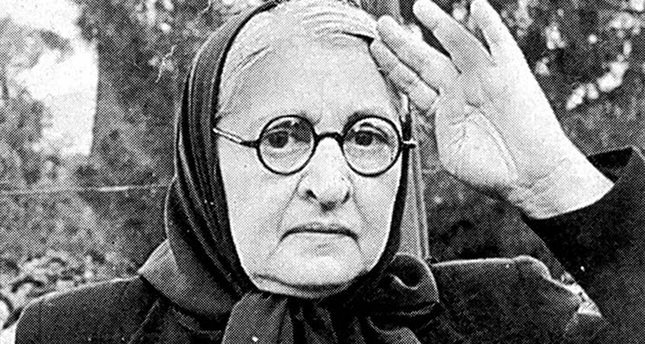 by Kaya Genç Jul 21, 2014 12:00 am
Turkey has a long and vivid history of making life difficult for its dissidents. Halide Edip Adıvar, one of the most interesting authors of the early Republican era, was one of those dissidents who was forced to live in exile after she was bullied by journalists in the national press. Portrayed as a degenerate traitor for her unorthodox political views, Adıvar was aware that her real crime was to discuss the nature of Turkey's state ideology.
In one of her famous lectures, Adıvar talked about the importance of creating a "plural nationhood" which would bring together a nation's historical traditions and modernizing ambitions in a balanced way.

This month, one of Turkey's leading publishing houses, Can Yayınları, is publishing Adıvar's groundbreaking work "Inside India" in Turkish for the first time. Hülya Adak, assistant professor of comparative literature at Sabancı University, had penned an informative afterword for this edition.
Adak discusses not only the publication history of the book, which was first appeared in English in 1937, but also the changes Adıvar had introduced to it in the following years. Three years after its publication, Adıvar produced a Turkish version of the book, which is not an exact translation of the English text, but a rewriting of it. Adıvar serialized the book inYeni Sabah newspaper (an ancestor of Sabah newspaper, Yeni Sabah ceased publication in 1964).

Adıvar had given some of her best speeches while touring India in 1935. In her lectures at Jamia University, titled "Conflict of East and West in Turkey," Adıvar spoke on the issues her country needed to discuss, but would postpone discussing for many decades. Adıvar admired the "Jamia" movement for its harmonious intermingling of anti-imperialism and tradition, and Indian nationhood with an Islamic identity. In his classic introduction to the Oxford Classics edition of "Inside India," the great Indian historian Mushirul Hasan described how "Halide Edip traced not only the conflict of the East and West in Turkey but also spoke of "the future blend of East and West" as a model solution for turning what had so far been a conflict into co-operation. With the confirmation of Turkey's candidacy for membership of the European Union at the December 1999 EU summit, its people can now draw comfort from the legacy bequeathed to them by the likes of Halide Edip."

In "Inside India," Adıvar gave an account of India, and its intellectuals, from the authorial position of a post-colonial subject. Edward Said had described how the oriental people had been condemned to be objects of Western observers in the history of Western thought. In "Inside India" this perspective is reversed, because it is an "Oriental writer" who represents "Oriental people" in a book written in English.

In her afterword, Adak praises this first-ever Turkish edition, but also recommends a new translation of the English original, where political issues like nonviolence, conscientious objectors and the effects of British imperialism in India, are discussed in more detail.

Reading the Turkish version, I was delighted by Adıvar's use of language: no modern translator could imitate that. The flow of language in the book is beautiful in its musicality and ungrammaticality. In the opening pages Adıvar describes her fascination with the idea of India from a very young age when she had read Rudyard Kipling's "The Jungle Book." This early encounter with India as an object of a Westerner's perspective had left an uneasy legacy in her mind. Adıvar would devote months of her life in the 1930s to deconstructing these initial impressions with typical intellectual
rigor, curiosity, and boldness.
Last Update: Jul 21, 2014 7:02 pm
RELATED TOPICS