Mathnawi to be translated into 7 new languages 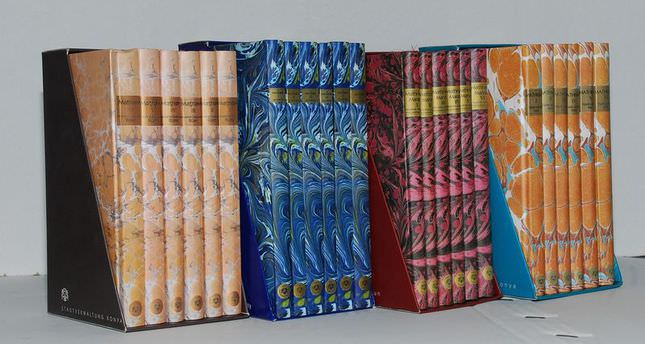 by AA Aug 14, 2014 12:00 am
Rumi's Mathnawi was recently translated into Portuguese, Polish, Amharic (spoken in Ethiopia), Swahili, Uyghur, Kurdish and Ottoman Turkish by Konya Metropolitan Municipality, which will increase the number of translations to 30. Mathnawi has been translated into Farsi, Turkish, Urdu, French, Turkmen, Spanish, English, Arabic, German, Italian, Albanian, Swedish, Japanese, Bosnian, Dutch, Kazakh, Uzbek, Tajik, Chinese, Greek, Russian, Malay and Azerbaijani. Having Mathnawi translated into 23 languages since 2005, the Metropolitan Municipality aims at increasing this number to 50. Within this scope, the Metropolitan Municipality began to work on translating Rumi's Mathnawi into Portuguese, Polish, Amharic, Swahili, Uyghur, Kurdish and Ottoman Turkish. Mayor Tahir Akyürek, in his statement, said Rumi is one of the unique sources that feeds the collective mind, soul and consciousness of humanity. He stated that the Mathnawi has been guiding humanity to a path based on peace, love, respect and tolerance, adding, "There is a huge need for Rumi's timeless and erudite words nowadays as the tears do not dry in our nearby geography and oppressed countries." Akyürek informed that they are conducting studies in order for Mathnawi to be read by more people throughout the world. "The number of translations has reached to 23 including the Azerbaijani translation, which is currently in the process of being printed. The Azerbaijani translation of Mathnawi was undertaken by Ebülfez Quliyev…we will extend the languages from the westernmost corner of the Middle East and South Africa to Turkistan. Apart from these languages that we have been working on, we are planning to have Mathnawi translated into 20 more languages and reach 50 translations," Akyürek said.