Turkish literature's most 'peculiar' book of poems, 'Garip,' is reprinted in a special edition 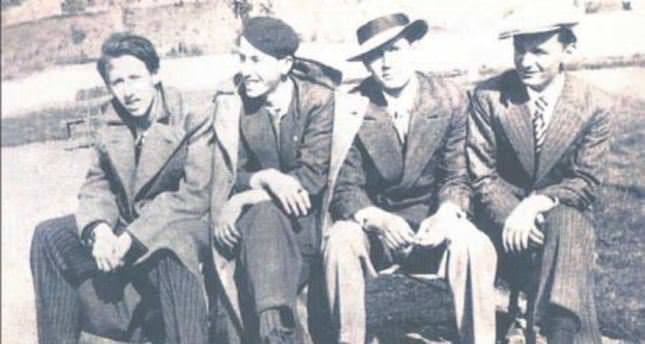 by Kaya Genç Sep 01, 2014 12:00 am
In 1941, Resimli Ay Matbaası, one of the legendary printing presses of the early republican era, published a book of poems entitled "Garip." The book's title had different meanings (peculiar, strange, forlorn, poor), and the poems in the book seemed to embody many of those adjectives. In the fashion of Wordsworth and Coleridge's "Lyrical Ballads," which marked the beginning of the English Romantic movement, "Garip" began a literary movement through artistic collaboration. It featured works by Oktay Rifat, Melih Cevdet and Orhan Veli, three poets who had been high school friends and who had contributed to the same magazines (most significantly to "Varlık") in previous years.

In "Millennium of Turkish literature," the eminent literature scholar Talat Sait Halman praised the group's "Poetic Realism" and wrote: "Their urge for literary upheaval was revolutionary, as expressed in a joint manifesto of 1941 that called for 'altering the whole structure from the foundation up ... dumping overboard everything that traditional literature has taught us.' The movement did away with rigid conventional forms and meters, reduced rhyme to a bare minimum and avoided stock metaphors, stentorian effects and specious embellishments. It championed the ideal of 'the little man' as its hero, the ordinary citizen who asserted his political will with the advent of democracy."

This little man and his lucidly observed world constitute the centerpiece of "Garip" that YKY published in a near-facsimile edition this month. The print run is 5,000 copies all of which are specially numbered. My copy was numbered 4959; when I tweeted a picture of the number page, other readers replied by posting theirs. I think it's a brilliant idea to publish this "strange" book of Turkish poetry in a (strangely inexpensive) hardcover edition.

"Garip" begins with a joint manifesto (rumored to be influenced by Andre Breton's surrealist manifesto) where the poets reveal the program of their movement in poetic language. The manifesto makes reference to Veli's famous poem "Epitaph I," which tells of the pains of a certain Süleyman Efendi. He suffers from corns, and the poem illustrates his pains. Some critics objected to this unorthodox interest in such mundane subjects and argued that in the name of defending "poetic sensibilities," corns and other bodily problems of individuals should be left out of poetry.

"Garip"'s manifesto is a call to arms against those defenders of the status quo. Fellow poets are invited to resist the temptation to write in "the poetic" register and try to focus on the mundane and the secular.

In the preface to "Lyrical Ballads," William Wordsworth famously described the poet as "a man speaking to men: a man, it is true, endowed with more lively sensibility, more enthusiasm and tenderness, who has a greater knowledge of human nature, and a more comprehensive soul, than are supposed to be common among mankind; a man pleased with his own passions and volitions, and who rejoices more than other men in the spirit of life that is in him..." This feeling of rejoicing in the mundane is apparent in many of the poems in this unique collection.

In 1945, four years after the publication of the book, Orhan Veli started a new career in the Education Ministry's Translation Bureau, which dominated the intellectual ethos of the era. But in less than two years he resigned, having being disillusioned, among other things, by the "anti -democratic atmosphere" that defined the bureau and other state institutions.