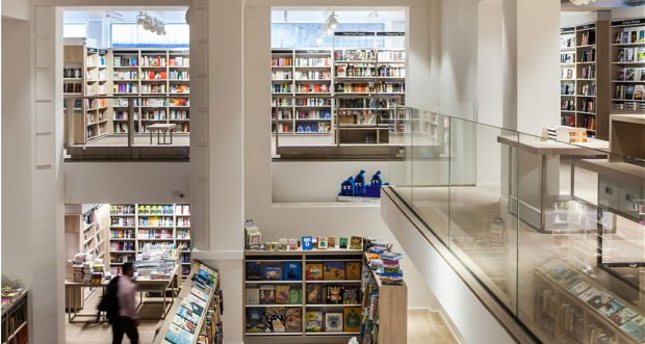 by Kaya Genç Sep 15, 2014 12:00 am
In Britain books are big business. Unlike in Turkey where publishers often have minuscule budgets for new books, British publishers are investing loads of money in titles by a wide range of authors. They commission those books in advance, and aggressively promote them. When I visited Foyles' flagship Charing Cross Road bookshop in London last week, I couldn't help but see hundreds of lavishly produced copies of David Mitchell's new novel, "The Bone Clocks." In this country, only politicians and businessmen invest in promoting their ideas with books, while authors are reduced to the position of babies abandoned at mosques. Only by chance does one discover their existence.

If Turkey's publishers were to adapt some of the methods used in the British publishing industry, Turkish books might start selling more copies than the standard 2,000 (for first impressions) which is a tragically low number for a country whose population is around 76 million. The standard royalty fee for a new book is similarly tragic: with a TL 2,000 cheque one may pay the rent for a month or two but that is about it. One way of selling more copies of new titles and paying proper fees to authors, would be to create events around books and their authors. Just take last week's launch of "The Monogram Murders," Sophie Hannah's new Hercule Poirot book, which is the first newly produced Poirot novel since "Curtain" (1975). HarperCollins, Hannah's publisher, created a special Twitter account for Bloxham (@ BloxhamHotel), the fictional hotel where the book's murder takes place. Closing a section of London's Ritz Hotel for the event, HarperCollins' publicity department invited actors (who impersonated the book's characters) and journalists (who took their pictures and tweeted them).

When the discovery of the body of a murdered guest was announced in one of the rooms, journalists immediately rushed in and posted pictures of the poor victim on Instagram. Twitter was abuzz with messages about the book for an hour or so, with the hashtag #monogrammurders widely seen by social media users. It was difficult not to feel curious about how Hercule Poirot would solve the crime that was just restaged in front of the guests, and go visit the bookstore the following morning. The responsibility of promoting books in similarly innovative ways, also falls on the shoulders of journalists. After all, they are the ones with the power to link current events with new books. News about the five year old Ashya King, whose Jehovah's Witnesses parents took him out of the hospital to seek treatment in Spain, made headlines in almost all British papers. Since Jehovah's Witnesses parents who intervene in their child's treatment is also the subject of Ian McEwan's new book, "The Children Act," journalists discussed those two events in the same pages.

Accomplishing something similar in the Turkish press would demand a new generation of newspaper editors, well-read both in Turkish literature and journalism. And the owners of publishing houses would do a great service to their country's literature by allocating proper sums of money and power to their commissioning and copy editors. Only then can they come up with excellent manuscripts that are worthy of being promoted through similar methods. Some may find these suggestions unachievable. But I remember a time when the idea of subway commuting in Istanbul seemed equally utopian. For the publishing industry to survive, it must shoulder the responsibility of offering perfectly conceived and produced works of literature to this country's readers who deserve great books, just like their counterparts in Britain.
Last Update: Sep 15, 2014 1:55 am
RELATED TOPICS