A Turkish poet reports from Glasgow, heart of the Scottish independence referendum 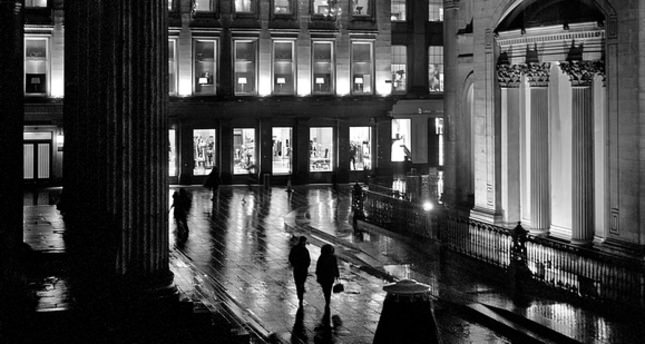 by Kaya Genç Sep 22, 2014 12:00 am
I read Savkar Altınel's "Hotel Glasgow" on the night of the Scottish independence referendum. The majority of the country had voted no, but its biggest city, Glasgow, voted for independence. Altınel, Turkey's most perceptive living poet, begins his latest narrative in Glasgow's Queen Street Station.

Although there is no mention of the referendum or Scotland's current political situation, the timing of its publication makes it difficult to think about "Hotel Glasgow" without thinking about last Thursday's historical vote.

Altınel's journey to Glasgow marks "A New Beginning" as the title of the first chapter suggests. It is Sunday and the protagonist, Savkar, is looking outside the train which brings him to a city he had visited many years ago. He walks on West George Street, turns right to Gordon Street and decides to use the subway. Eventually he reaches Shields Road, where he had lived for eight months in a large building numbered 425, during his younger years. Altınel is a writer of precision and carefully observed detail: if he walks from point X to Y, we know exactly what exists in between those points.

His narrators tirelessly describe the world of appearances in a characteristically flat and unpoetic prose. Here he describes how Mrs Nairn, Savkar's host in Glasgow, had looked at her reticent guest with concern all those years ago. As he catches a glimpse of the large window of her flat from the street, Savkar imagines seeing her again in the present time. He walks to the entrance of the apartment, to look at the names of the building's new inhabitants, and to see the stairs leading to his previous lodgings. He then walks toward Pollokshields, leaving that symbol of youth behind him. "Hotel Glasgow," like many of Altınel's books, offers two narratives. In the present time, a lonely man wanders as lonely as a cloud in an abandoned city. Thanks to his solitary state, he can reflect on the experiences of his youth, of a time when he had imagined living an artistic life in the future. Many of Savkar's dreams were not fulfilled, so his only option is to remember the details of those dreamy days. From Glasgow Savkar travels to Paris where he stays at Hotel Glasgow on Rue de la Felicite (the street of happiness).

While sitting on his hotel bed, he summarizes his curious situation: "I am in Glasgow, at the heart of Paris," he writes. The next chapter, "Jules Verne Street" opens with the distant roar of Marlon Brando, the lead actor in Bernardo Bertolucci's 1972 film, "Last Tango in Paris."

Savkar locates the building where the film was shot, and while looking at its facade remembers his days in Turkey as a teenager. He writes reflectively on Bertolucci's film, Brando's method of acting and the biographical details of his youth.Angela Davis and Michelangelo Antonioni's 1975 film, "The Passenger," are the subjects of the following chapters. Here the narrator blends the essayistic with the autobiographical. The subject matters change while the narrator does not. After his constant struggle to redefine and rediscover his identity and subjectivity, Savkar still remains something of a mystery.

He is not at all sure about whether he is still the young man who had wandered the streets of Glasgow all these years ago. He even has his doubts about calling himself Savkar. This sense of self-scrutiny and self-analysis is typical of great observers and poets of this world who courageously present their own selves to the public gaze so that we, the readers, decide whether we can be independent from him and from one another.