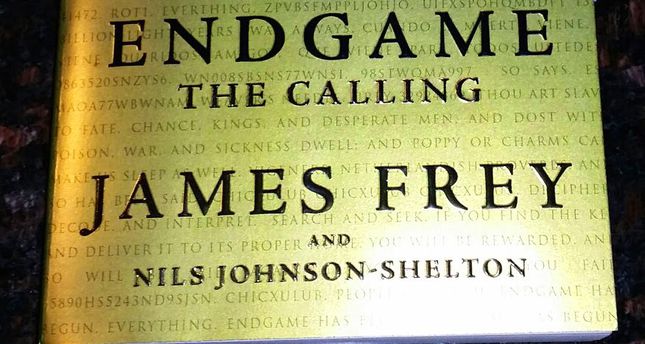 by Daily Sabah Oct 08, 2014 12:00 am
The first novel in American author James Frey's Endgame series, "The Calling," offers a hefty prize of $500,000 (TL 1,137,799.82) to those who will decode the message hidden in the book. Frey's new novel featuring an interactive puzzle was released yesterday in 36 countries including Turkey. The adventure trilogy that greatly employs technological means and social media is described as the world's most comprehensive book project so far. Google's Niantic Labs will turn the book into a location-based augmented reality game. Endgame will also soon be adapted to the silver screen by 20th Century Fox. The new young adult trilogy depicts 12 teenage players who represent 12 ancient families and search for three keys that will save the world and their people. The book was translated by Uğur Mehter and published by Pena Publications in Turkey. "The Calling" is set in Istanbul's Şükrü Saraçoğlu Stadium where a giant meteor explodes during a soccer match. The burning meteor is the first incident that might bring the world to an end. The 12 teenagers between 13 and 20, who are trained with different skills to change the fate of humanity, begin a deadly investigation to find the keys. Readers who decode the message and find the clues woven into the text will unlock $500,000 worth of gold on display at Caesars Palace in Las Vegas. The trilogy's second book will offer $1 million, while the third book's prize will be $1.5 million. In a news release, the author says the interactive novel will be comprised of PC games, films, social platforms and e-books.