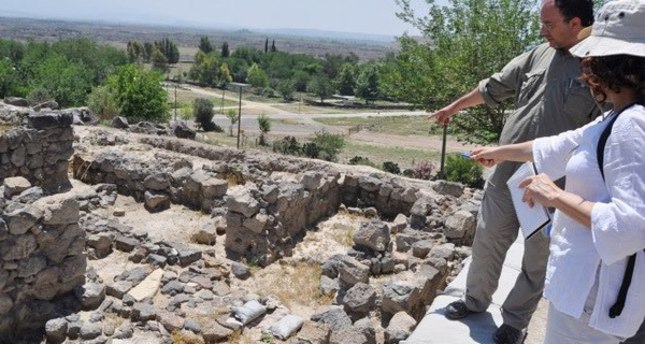 An American author traces the life of Hittite Queen Puduhepa, who is believed to have lived in Lawazantiya, located in modern-day Adana province. Puduhepa is seen as the symbol of the true strength and courage of Anatolian women

Arizona-based author Judith Starkston, known for her books in historical fiction and mysteries set in Troy and the Hittite Empire, paid an onsite visit this week to Tatarlı Tumulus for her upcoming novel series depicting the indomitable Hittite Queen Puduhepa. Still working on her latest book to be published next year, Starkston came to Turkey and explored the archeological site in southern Adana province, which it is believed to be Queen Puduhepa's hometown of Lawazantiya.

The American author visited the ancient tumulus and the seven sacred springs surrounding the village of Tatarlı. Starkston's new book will present sections describing the places where the queen spent her early years. The historical fiction series unveils the secrets about the queen featured as sleuth, Starkston said. In the first book, young Puduhepa, residing in Lawazantiya, meets the Hittite King Hattusili III who fights against the Egyptian pharaoh Ramses II. Hattusili is involved in a plot to kill Ramses, but Puduhepa tries to clear his name. The queen's deep love for the king and the help of Ishtar, the goddess of fertility and war, are what make the novel so fast-moving.

The story of the King Hattusili and Puduhepa goes back to the 13th century B.C. Puduhepa was living with her father Bentepsharri, who was the city's head priest. It is told that Ishtar appeared to Hattusili in a dream and instructed him to marry this smart and powerful girl. Of course, this marriage would pave the way to dominate Kizzuwatna, an independent Anatolian kingdom surrounded with valuable resources in the present-day Çukurova region 4,000 years ago. On his return from the Battle of Kadesh, Hattusili found Puduhepa and asked her to marry him to pay tribute to Isthar. Puduhepa accompanied the king to the capital of Hapissa as the empire's new queen who stands out a successful woman in a male-dominated society and introduced her country's unique culture to the Hittites. Certain biographical records say Puduhepa enjoyed the same rights as her husband. Her seal is on the Treaty of Kadesh, the first extant peace treaty in history, between Egypt and the Hittites.

The excavations at Tatarlı Tumulus are presently being carried out by Çukurova University under the commission of Turkey's Culture and Tourism Ministry and the Cultural Heritage and the General Directorate of Museums. Head of excavation, Assistant Professor Serdar Girginer of Çukurova University's Archeology Department, underscored the role of Puduhepa, commonly referred to as one of the most influential women in the ancient Near East. Girginer compared her to Ottoman Sultan Suleiman I's wife Hürrem Sultan since they both actively took part in international diplomacy, politics and the court of the period. "Queen Puduhepa is a brand value that promotes the city's cultural history abroad. Recent archeological findings support the assumption suggesting Tatarlı Tumulus was the ancient settlement of Lawazantiya," he said.

He announced that Starkston's new fiction series will be a three-book set, which are planned to be translated into Turkish after its release. "Her work bears significance to enliven the tourism industry in Adana and the Çukurova region," Girginer continued. Apparently, Starkston will hit bookstores similar to French author and Egyptologist Christian Jacq who is the author of several historical fiction novels such as a the five-book suite about the pharaoh Ramses II that have been translated into more than 30 languages.