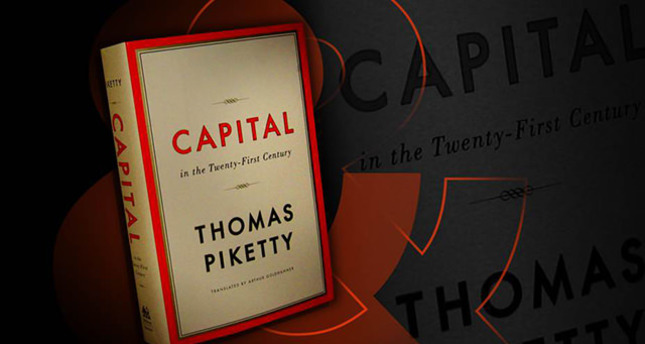 by Kaya Genç Oct 20, 2014 12:00 am
When it was first published in France last year, Thomas Piketty's "Capital in the Twenty-First Century" became an unexpected bestseller. Written by an expert economist, the book's main argument about growing inequality was nothing less than a call for arms to reform capitalism. Piketty's attack on the fundamental promises of liberal capitalism rubbed the neoliberal ideologues and some publications the wrong way. For those who had long pontificated about state intervention in the economic field being the worst of all possible evils and the simple formula of merely succumbing to liberal capitalism to have less inequality and more prosperity, it was a difficult read. Piketty argued that regulated markets was somewhat inevitable in today's world if people truly wanted to deal with the ever growing problem of economic inequality.

That İş Bankası Yayınları is publishing Hande Koçak's Turkish translation of the book this week is cause for celebration. In the past we would have to wait for years before big books like "Capital" reached our shores. Now, even before the book's English translation appeared in paperback, we have "Capital in the Twenty-First Century" in both hardcover and paperback formats.

Even before Harvard University Press published the book's English edition in April 2014, American and British readers were already debating its main arguments. Writing in The New Yorker in March, John Cassidy praised Piketty for writing "a book that nobody interested in a defining issue of our era can afford to ignore." In the course of a few weeks "Capital" became the most talked-about book in London and New York. In fact it was long time in the making: books that point to weaknesses and crises of neoliberal economics and liberal capitalism (from Naomi Klein's "Shock Doctrine" to Owen Jones's "Chavs") had been proving extremely popular with readers everywhere. In the introduction Piketty notes that "the distribution of wealth is one of today's most widely discussed and controversial issues" before asking what we really know about its evolution over the long term. "Do the dynamics of private capital accumulation inevitably lead to the concentration of wealth in ever fewer hands, as Karl Marx believed in the nineteenth century? Or do the balancing forces of growth, competition, and technological progress lead in later stages of development to reduced inequality and greater harmony among the classes, as Simon Kuznets thought in the twentieth century?"

Piketty explains Kuznets's curve theory which argues that "inequality everywhere can be expected to follow a 'bell curve.' In other words, it should first increase and then decrease over the course of industrialisation and economic development." According to Piketty, this was part of the optimistic mentality of Cold War. One of his worrying conclusions is the following: "Since the 1970s, income inequality has increased significantly in the rich countries, especially the United States, where the concentration of income in the first decade of the twenty-first century regained- indeed, slightly exceeded- the level attained in the second decade of the previous century." "Capital in the Twenty-First Century" questions whether we can stop growing inequality in today's world. It will be interesting to see what Turkish readers and economists will make of Piketty's conclusions.