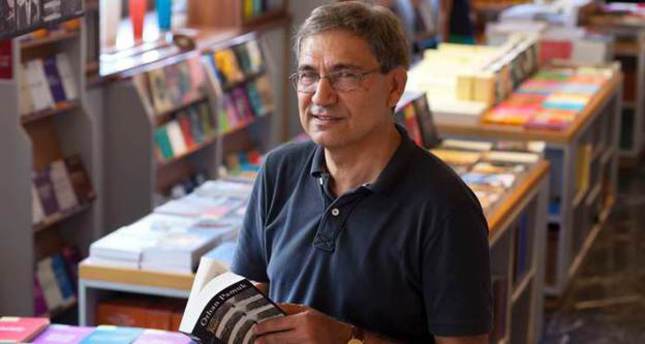 by Kaya Genç Dec 13, 2014 12:00 am
In his autobiographical poem "The Prelude," William Wordsworth reflected on a certain "strangeness in my mind, / A feeling that I was not for that hour, / Nor for that place." Orhan Pamuk's excellent new novel, "A Strangeness in My Mind" borrows this expression for its title and imports the feeling to Turkey. That strangeness in the mind does not only belong to Lake Poets and poet laureates of Britain, a boza seller from Turkey can also have this romanticist feeling of alienation from his surroundings. In this long, impressive novel, Pamuk manages to reverse the gaze of the reading public upon the country's street sellers and urban poor. His protagonist, Mevlut Karataş, is by no means glorified or mocked: we put ourselves in his shoes while Mevlut wanders along Istanbul's streets lonely as a cloud.

Pamuk's novel begins in medias res, from the midpoint, before taking us to the first years of Mevlut's life. This technique works very well because we get to watch Mevlut as he sells boza (Turkey's favourite malt drink made from wheat and corn) in the first chapters, rather than wait for those scenes for 200 pages. When we see Mevlut in the opening scenes, he looks like the boza sellers we are accustomed to see on Istanbul streets: a one dimensional character whose only function in life is to provide us with a cup of boza. Then we go on to his childhood and read about Mevlut's days as a shepherd. His father leaves his town and goes to Istanbul for work and finally decides to bring Mevlut with him. They live in a gecekondu, one of those low cost apartments built overnight in Istanbul.

As Mevlut grows up in the fictional Duttepe and Kültepe neighborhoods, we watch the fierce struggle between Turkish nationalists and communists who find different reasons and try different methods to kill each other. Mevlut finds things to like in both camps but is terrified as the violence spreads in the country in the 1970s. When Turkish generals take reins of power in the 1980 coup d'etat, life becomes difficult for street sellers since the Armed Forces swear to cleanse the streets. Starting his professional life as a yogurt seller, Mevlut is devastated again when big companies start controlling the yogurt business. But he is an endlessly adaptable fellow, finding different things (such as ice cream cones and rice) to sell in order to survive.

Mevlut is also a passionate lover although a comically deceived one. When he sees Samiha, one of the daughters of Abdurrahman Efendi, at a wedding, Mevlut falls in love with the girl. While doing his military service in Kars, he sends hundreds of letters to his beloved, fantasizing about marrying Samiha once he returns to Istanbul. But when the time comes to run away with the girl, Mevlut realizes that the family had given him Rayiha, Samiha's plainer sister. As Mevlut feels a strangeness in his head following this realization, we get a glimpse of his character for the first time. Instead of leaving Rayiha and demanding to get Samiha, he accepts his fate and brings her to his house. "Kanaatkar" (contented) is perhaps the best word to describe Mevlut's character: instead of revolting against the reality, he learns to accept its imperfections and be happy with it. For Pamuk, this is not at all a sign of stupidity or weakness: Mevlut ends up being very happy with Rayiha and their daughters.

The tale of the strangeness in Mevlut's head is told from different perspectives thanks to which Pamuk can create wonderful dramatic ironies. Although he is sympathetic to their realities, Pamuk never fails to show us points in which those characters are tricked. Since we have access to thoughts of other characters, we always know more than Mevlut. Boza sellers and the urban poor have an interesting place in Turkish culture. Many see them as unruly elements of a society that needs taming and reform, while others glorify them and put them on a pedestal. They seem to have provided Pamuk with ideal material for an ambitious novel about Istanbul's changing realities: instead of dismissing or adoring them, Pamuk looks at them novelistically. Generalities are absent from this novel: Pamuk managed to diminish generalities about the urban poor to particulars, bringing out what Vladimir Nabokov had memorably termed as the "genuine quiddities" of his cast of characters.