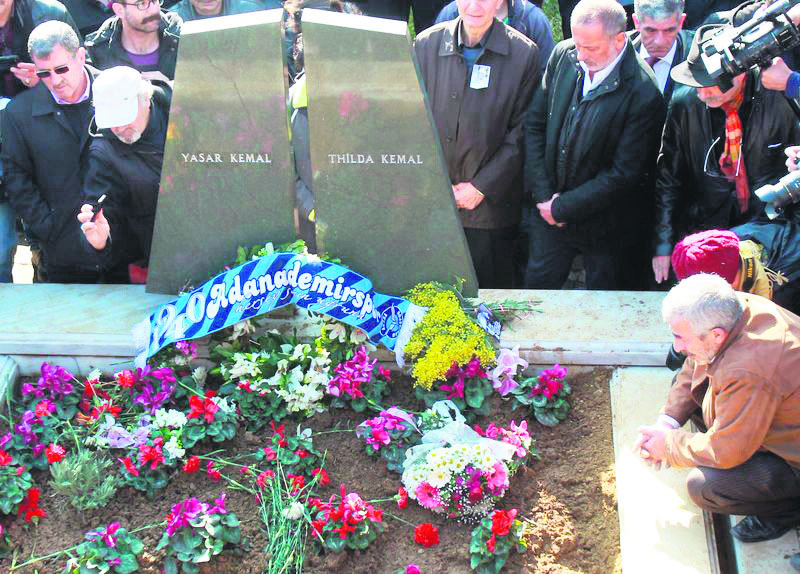 by Daily Sabah Mar 02, 2015 12:00 am
The tearful funeral of Turkish literature giant, Yaşar Kemal, who died at the Istanbul University Faculty of Medicine Hospital at the age of 92, was held at the Teşvikiye Mosque, and he was laid to rest in the Zincirlikuyu Cemetery yesterday. Ayşe Semiha Baban, the wife of Kemal, accepted condolences at the entrance of the mosque and said, "I am sorry for our loss. This is also Turkey's loss." Following the funeral, Kemal's loved ones commemorated him in a ceremony that was held at Istanbul's Lütfi Kırdar Convention and Exhibition Center. The ceremony started with an opening speech and included a moment of silence for the great Turkish author. After the screening of a documentary focusing on Kemal's life and works, people read passages from his novels.

Villagers from Gökçedam in the district of Kadirli in Osmaniye, which was part of the Adana province when Kemal was born in 1923, are also mourning the loss of their fellow townsman. While Kemal's funeral took place in Istanbul, villagers conducted a funeral prayer in absentia in Gökçedam. The President of the Yaşar Kemal Çukurova Association, Mehmet Özer, said that they wanted the veteran author to be buried in his hometown. However, they learned that Kemal's will stipulated another burial place. "Yaşar Kemal could not come to these lands, but we will take soil from his hometown to his grave and spread the soil over his last resting place. This soil will nourish him and Yaşar Kemal's soul will be blessed," he added.