Yaşar Kemal: A master Turkish novelist who will never be forgotten 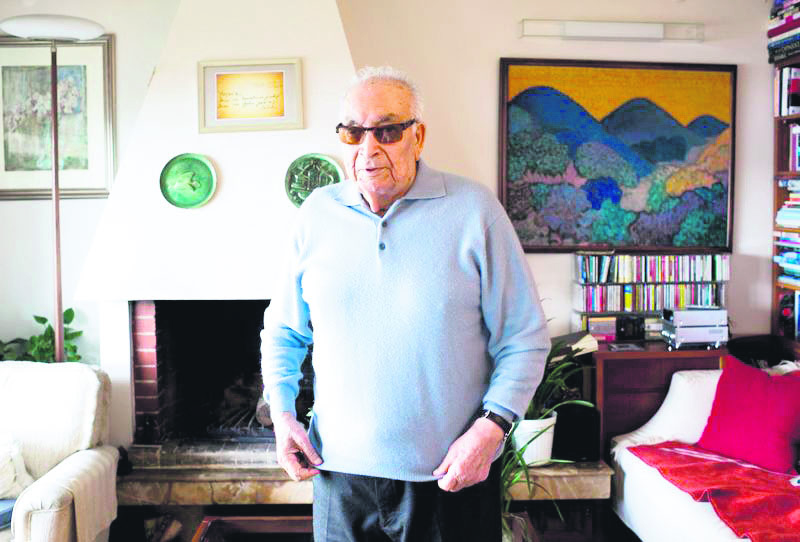 On Feb. 28, 2015, we lost one of the greatest novelists Turkey has ever seen. Yaşar Kemal was a man who celebrated the lives of the downtrodden, a storyteller in the oldest tradition, that of Homer, and a big-hearted hero who was a spokesman for the people who had no other voice

In 1922, Yaşar Kemal was born in the village of Hemite -now called Gökçedam- as Kemal Sadik Gökçeli, to a family of Kurdish farmers. His mother, Nigar, and his father, Sadi, had been moving from one small settlement to another in an attempt to escape the ravages of World War I. Their search for a safe place to live ended in the province of Adana, in southern Anatolia. At the age of five, Kemal had traumatic experiences that greatly affected him: He lost the use of one of his eyes in an accident, and witnessed the murder of his father in a mosque by an orphan his family had adopted. This incident later served as the basis of his 1980 novel "Salman the Solitary." Witnessing these events left Kemal with a speech impediment that lasted until he was 12-years-old.

Kemal began primary school at the age of nine at the Burhanlı Village School and later moved to the Kadirli Village Primary School. He continued his education at a secondary school in Adana where he worked as a laborer in a cotton factory. Kemal ended his formal education by leaving in his third year of secondary school. He later worked in numerous odd jobs, such as a cotton picker, threshing machine operator, tractor driver and foreman in the rice fields. At the age of 17, Kemal had his first experience with the law, and was arrested for his political beliefs. Later, after acquiring a typewriter, he started earning his living as a public letter writer, a job where he would write petitions for people who had business in government offices and who needed to apply for bureaucratic procedures. He once said, "If I had not discovered literature, I would have become a bard, a singer of epic poems."

He was arrested once again in 1950 on charges of disseminating Communist propaganda and was placed in Kozan Prison. He was later acquitted, and moved to Istanbul, where he eventually joined the staff of one of the most prominent newspapers in Istanbul, Cumhuriyet (Republic). It was at this point that he adopted his pen name, Yaşar Kemal, wishing to escape the notoriety of his youth.

A story of high-profile success

From then onward, Kemal's life was a story of high-profile success. He published three travel books based on his work as a reporter, and more than 20 novels between 1955 and 2013, continuing to address the problems faced by the people of the southern Turkish countryside, whom he had known in his earlier life, as well as their sufferings and feuds.

Although his books focus on the hard lives of peasants and the valor of the rebels who spring up among them, his work is also notable for its focus on environmental destruction, such as the burning of forests, the draining of swamps and the slaughter of dolphins. Kemal also played a key role in stopping the planned destruction of a historic Armenian shrine, the Church of the Holy Cross on Akhtamar Island in eastern Turkey. He described the sympathetic nature of the Armenian people in several of his novels as well. In 2013, the Armenian Ministry of Culture gave Kemal its "Krikor Naregatsi" decoration as a recognition of "his tribute to Armenian cultural heritage and his courage, as well as his commitment, to universal values related to justice, freedom and human dignity."

His first novel, "İnce Memed" (Memed, My Hawk), evoked great public enthusiasm for his works and is a sort of "Robin Hood" tale, rich in autobiographical elements. The focal point of his initial works was the toil and plight of the people of the Çukurova plains, during what could be called Turkey's industrialization period during the 1950's. Kemal once said: "No writer can be a great novelist without their own Çukurova," emphasizing the importance that Çukurova has for him. In "İnce Memed," Kemal criticizes the fabric of society through a legendary hero, a protagonist who flees to the mountains as a result of the oppression of the Aghas. The novel tells the story of the war Memed declares on the Aghas in an effort to defend his fellow villagers. It is a dramatic tale of the adventure of the hero as he resists, fights and tries to overcome the Aghas, who own five villages in the area. In the words of the author himself, the story of "İnce Memed" is the story of a "man who had to." "İnce Memed" has been translated into more than 40 languages and is one of the best-known Turkish books in world literature, after Orhan Pamuk's books.

Candidate for the Nobel Prize

After receiving international acclaim with the publication of "İnce Memed," Kemal was noted for his command of the Turkish language and lyrical description of bucolic Turkish life. He was later nominated for the Nobel Prize in Literature in 1973, being the first Turkish novelist to ever become a candidate. However, a younger generation of Turkish writers, many of them modernists who emerged from the urban elite rather than the peasantry, started to emerge, eclipsing him. In 2006, Pamuk, the most prominent of them, won the Nobel Prize.

The famous writer Elif Şafak said the following about Kemal: "He is one of the few writers who can deftly blend the compassion and love he feels for his characters with astute irony, morbid criticism and sharp social observations. In each and every book, he touches and lifts up the beauty of becoming a free, soul-searching human being, even in the most feudal social settings. He is the architect of unforgettable literary heroes and a beacon for writers of the generations that followed him."

In 1952, Kemal married Thilda Serreo, who came from one of Istanbul's leading Jewish families. It was Serreo who translated many of his books into English, including the "Wind from the Plain" trilogy, published as a box set in June 2001 by Yale University Press. Serreo passed away in 2001, but Kemal remarried in 2002, wedding Ayşe Semiha Baban. She survives him today as does an adopted son, Rait Gökçeli. Always aiming to better himself and the world we live in, Yaşar Kemal is someone very special and close to our hearts who will never be forgotten. "All my life, my only dream was to write a little bit more, a little bit better," Kemal said in 2012, after the completion of what would be his final novel, "Tek Kanatlı Bir Kuş."
RELATED TOPICS