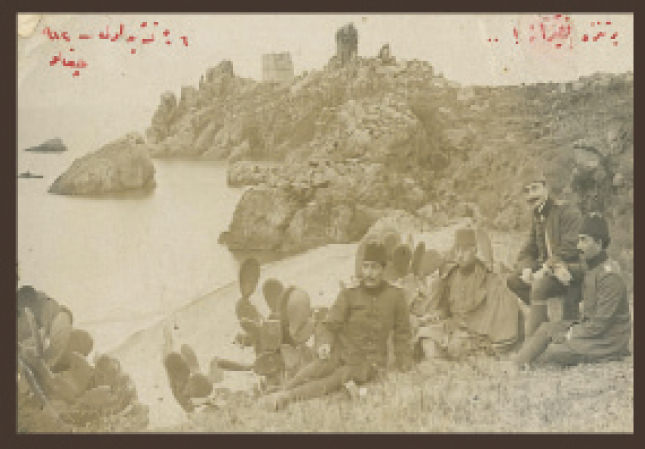 The journal of Hasan Cevdet Temizkanlı, who fought on multiple fronts after serving in Gallipoli for six months, and who received a war medal as well as the Medal of Independence, has been published on the centenary of the Battle of Gallipoli. The Gallipoli veteran's journal was edited by his grandson, Mutlu Karakaya, who is a Ph.D. student at Istanbul University's Institute of Atatürk Principles and Revolution History

Born in 1884 in Istanbul, Hasan Cevdet Temizkanlı, a retired colonel and Battle of Gallipoli veteran, first graduated from the Kuleli Military High School and then graduated as a young lieutenant from the Turkish Military Academy. Temizkanlı served in Gallipoli for six months as a first lieutenant and then as a captain, and recorded his experiences in his journal. The veteran soldier continued writing in his journal after he was sent to the eastern front following the Battle of Gallipoli. In his journal, which is composed of 125 pages, the Gallipoli Campaign covers 83 pages. He compared some parts of the campaign to doomsday, and recorded the fact that gilded envelops that released poisonous gas were used during the war. Temizkanlı, who had infiltrated behind the enemy line in disguise during a short-term cease-fire, said that some enemy soldiers spoke perfect Ottoman Turkish. He also noted that soldiers boosted their morale by staging plays behind the front, and recorded that Mevlit was chanted on the day of the Isra and Miraj. Here are some of the striking sections from Temizkanlı's journal, which was published by Yeditepe Publishing under the title "Kıyamet Koptuğunda" (When All Hell Broke Loose):

May 24 - "Upon the request of the Mediterranean Expeditionary Force Commander, British General Sir Ian Hamilton, Liman Pasha and German Commander Liman von Sander decided on a nine hour-long cease-fire for both sides in the morning. Staff officers and military officers were disguised and sent to discover the enemy emplacements and gather intelligence about their situation. My observation was that the enemy soldiers had low morale and have almost lost their spirit. When it comes to attire, they are no different from us. As a matter of fact, some of them are very shabby. During our mission, we encountered three types of soldiers: An infantryman, a volunteer and a naval officer. Most of them know Ottoman and one of the officers was even speaking perfect Ottoman."

June 11 - "As it was the Isra and Miraj, our regiment got together on a small, flat embankment near the Matik Stream upon the orders of Lt. Col. Ali Bey, and chanted Mevlit for the souls of the martyrs following the Friday prayer. Before the chanting, the mufti of our regiment, Şevki Efendi, preached about holy war to the privates and we prayed together. After the prayer, we prayed once more for our allies, Germany and Austria, to triumph in this war. Later on, the physician of the 1st Battalion, Captain Feyzi Bey, gave a short speech about health and cleanliness, and the regiment was dismissed."

June 18 - "At 3:00 p.m., the theater stage, which had been built in our little practice area to perform plays, was jammed by privates and officers. The division's band played nice songs such as "Carmen." How strange: A theater in the war zone! The stage decor was neat, given the situation we are in. Of course, the only materials we have are our guns and tents. Our theater was a nice replica of real theaters with its curtains and backstage. Komik Şevki gathered together those who can act, and performed a play titled 'Sahte Esirci' (Fake Prisoner). The cantos were no different that the real vocalists. Then, the play ended and the soldiers played 'pull the rope.' Those who won were given cigarettes. Soldiers ran in sacks and with eggs on their mouth just to entertain themselves. The winners won various prizes."

June 25 - "The planes began dropping two other things besides bombs. One was 300 or 400 pieces of iron. They are in the shape of sharp iron arrows that pierce everything, human or animal, they hit. One of them hit a pack animal the other day. It pierced the saddle on its back and the animal before sticking into the ground. The other one is beautiful gilded envelopes. The soldiers take them believing they are written statements or some other paper. When opened, the envelopes catch fire, and the gas inside of it poisons everyone around it. I wonder what else they will invent to kill people!"

Aug. 21 - "The war continues intensely. It is like we are in hell. Thank God, I survived many incidents today. A howitzer landed next to me, but no one got hurt. Numerous bullets were burring in the air in harmony ... They told us that civilization has improved. Germans, which should be the most civilized people, started it with the British, and then the whole world entered into this war. What is this? Is the aim of civilization to slaughter each other? Of course, this war will not continue forever, and someday, peace will be made. I wonder whether civilization will flush and drown. What a shame! Everybody is in a quarrel with each other all the time as if they are fighting for a bone.

Sept. 24 - "The night was quiet. My old friend Capt. Hikmet Bey came and we talked. Oh! Talking about the old days awakened so many memories. I learned that all my friends have died and became martyrs. I am very sorrowful."

Temizkanlı was promoted to the rank of commander in May 1915, and commanded the 4th Company of the 14th Regiment's 1st Battalion during the landing at ANZAC Cove. Due to his accomplishments during the Gallipoli Campaign, he received a War Medal. He was promoted to the rank of captain on June 15, 1915. Following his achievements in the Battle of Gallipoli, he was appointed to the eastern front and received a Silver Merit War Medal on May 29, 1917. Later, he was assigned to the Mesopotamian Campaign. However, he was captured as a British prisoner of war on Oct. 30, 1918. He escaped from the camp where he was being held captive on June 22, 1919, and joined his division in Mardin on Sept. 1, 1919. After being promoted to lieutenant colonel on April 6, 1920, he served as a battalion commander during the Siege of Aintab, but he was wounded during the Battle of Sakarya. He was rewarded due to his success, promoted to the rank of major on Sept. 14, 1921, and then received the Medal of Independence on Feb. 21, 1927. He was promoted to the rank of colonel and became the President of the 1st Division Army Requirement Office in Istanbul on Aug. 30, 1934. He retired from the military on Aug. 29, 1937, and died of a cardiovascular disease on April 14, 1939.
Last Update: Mar 18, 2015 1:28 am
RELATED TOPICS