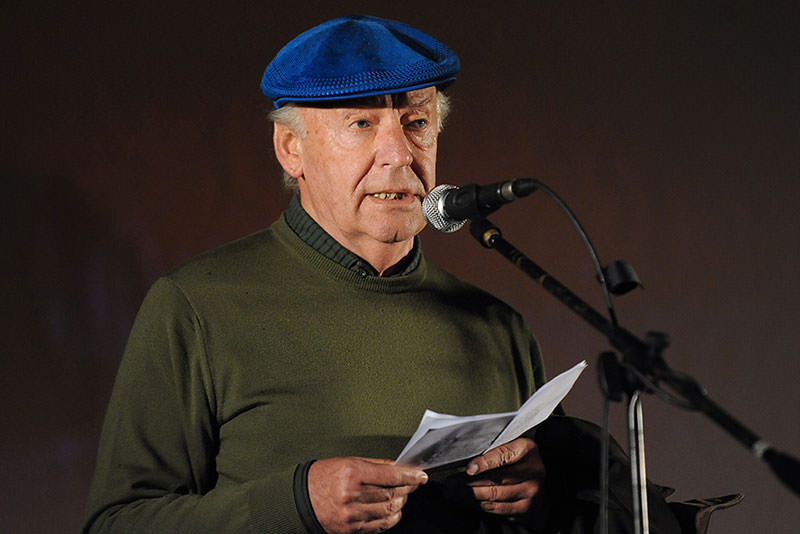 Galeano speaks during the closing march to support the referendum to abolish an amnesty law for those involved in crimes against human rights during Uruguay's last dictatorship (1973-1984), in Montevideo in 2009 (AFP Photo)
by Associated Press Apr 14, 2015 12:00 am
Uruguayan author Eduardo Galeano, whose "The Open Veins of Latin America" became a classic text for the left in the region and propelled the author to fame, died Monday at the age of 74.

Galeano had been ill with lung cancer for several months. His death was confirmed by the weekly publication Brecha, where he was a contributor.

Galeano's work inspired several generations of Latin Americans with powerful, acerbic descriptions of the continent's exploitation by capitalist and imperialist forces. The writer defined himself as someone who helped rescue "the kidnapped memory" of Latin America, a "despised and beloved land."

No work reflected that more than "Open Veins," published in 1971. In it, Galeano wrote that Chile with its vast nitrate deposits, Brazil with its abundant rain forests and small Venezuelan towns with oil reserves "had painful reasons to believe in the mortality of fortunes that nature bestows and imperialism usurps."

"The world and Latin America have lost a maestro of the liberation of the people," said Bolivian President Evo Morales, a left-leaning leader. "His messages and works have always been oriented toward defending the sovergnty and dignity of our peoples."

"Open Veins" had such strong resonance in the region that former Venezuelan President Hugo Chavez, a populist always quick to lionize thinkers on the left, handed a copy of the book to U.S. President Barack Obama the first time they met in 2009, calling it "a monument in our Latin American history." Sales of the booked spiked after that interaction.

Galeano remained a sharp critic of capitalism and of U.S. policies to the end. But he shocked many last year when he criticized his signature work, saying it was poorly written and that at the time he didn't have the academic formation to take on such a weighty subject.

"I wouldn't be capable of reading this book again; I'd keel over," Galeano said while answering questions at a book fair in Brazil. "For me, this prose of the traditional left is extremely leaden, and my physique can't tolerate it."

Born in Montevideo in 1940, Eduardo German Hughes Galeano began his career at 14 publishing cartoons under the name "Gius" because of the difficult pronunciation of Hughes in Spanish. Shortly thereafter, when he began writing news articles, he would use Galeano.

As a young adult, Galeano did several jobs while he wrote on the side: courier, factory worker, bank teller, and stenographer, among others.

From the beginning, Galeano's ideology and works embraced ideas on the left. Those ideas forced him into exile in Argentina and Spain during Uruguay's military dictatorship between 1973 and 1985.

"The only way that history won't repeat itself is by keeping it alive," he once wrote.

Returning to Uruguay after the return to democracy, he was frequently seen in Montevideo cafes debating with other intellectuals or simply shooting the bull with friends or people he had just met.

After two failed marriages, he married Helena Villagra in 1976 and together they had three children.

Over his career, he would write several more books focused on the politics and economics of the time. "Days and Nights of Love and War," published in 1978, examined the military dictatorships in Argentina and Uruguay.

Despite many accolades and a prolific body of work, Galeano will no doubt be most remembered for "Open Veins," a work that reflected a turbulent time in the region that included military dictatorships, heavy foreign investment and a coming of age of many age for people growing up in the shadow of the Cuban revolution of 1959.