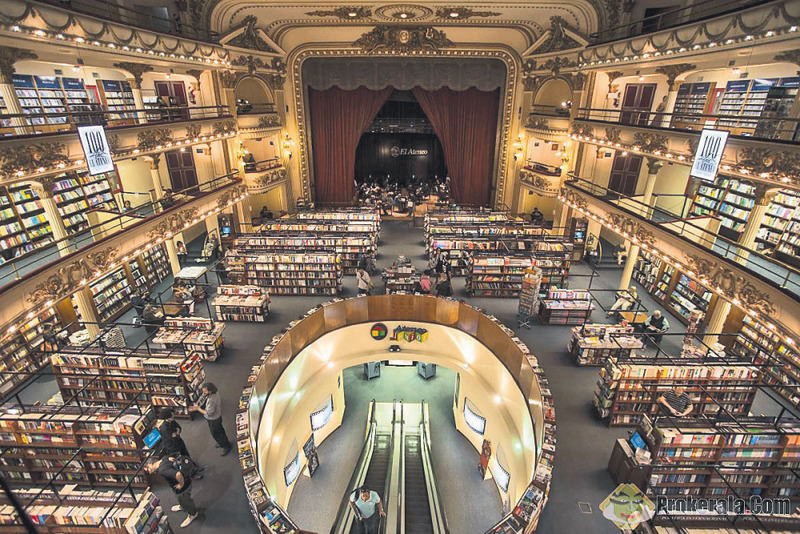 Culture boomed along with the economy in the early part of the 20th century, and even if the economic path grew rocky, ordinary Argentines embraced and stuck to the habit of reading.
by Associated Press May 01, 2015 12:00 am

All across Argentina's capital, lodged between steakhouses, ice cream shops and pizzerias, is an abundance of something that is becoming scarce in many nations: bookstores

From hole-in-the-wall joints with used copies of works by Jorge Luis Borges, Miguel de Cervantes and Gabriel Garcia Marquez to elegant buildings with the latest children's books in several languages, Buenos Aires is filled with locales that pay homage to print.

The city has more bookstores per capita than any other major city in the world, according to a recent study by the World Cities Cultural Forum, an organization that works to promote culture. With a population of 2.8 million people within the city limits, there are 25 bookstores for every 100,000 people, putting Buenos Aires far above other world cities like London, Paris, Madrid, Moscow and New York. The closest is Hong Kong, which has 22 bookstores per 100,000 people.

"Books represent us like the tango," said Juan Pablo Marciani, manager of El Ateneo Gran Splendid, an immense bookstore in the affluent Recoleta neighborhood where 7,000 people visit each week. "We have a culture very rooted in print."

Behind the high number of bookstores, 734 by last count, is a combination of culture and economics. Culture boomed along with the economy in the early part of the 20th century, and even if the economic path grew rocky, ordinary Argentines embraced and stuck to the habit of reading. To this day, many across the region call the Argentine capital the "Paris of Latin America" thanks to its architecture, wide streets and general interest in the arts, music and literature.

During the Spanish civil war in the 1930s, many top writers and editors fled to Argentina, further cementing the country as a literary capital and powerhouse for printing.

In 2014, there were 28,010 titles in circulation and 129 million books were printed in the country, according to the Argentine Book Chamber, making it one of the most prolific book printers in Latin America.

Many stores carry rare books that are hundreds of years old. At Libreria Alberto Casares, bookworms can gaze at a collection that includes a French translation of Spanish poet Garcilaso de la Vega from 1650 and Gregorian chants on papyrus dating back to 1722.

In buses and subways, in parks and cafes and even in malls, it's common to see people flipping pages of whodunits, histories and poetry, or most recently, new books about the mysterious death of prosecutor Alberto Nisman, a case that has rocked the country since he was found shot dead in his bathroom Jan. 18.

"I was born with paper books and I'll die with paper books," said Aida Cardozo, 65, who was recently reading "Las Huellas del Rencor," or "Traces of Resentment," philosopher Santiago Kovadloff's work on changes in Argentine society over the last 13 years. "Computers are for responding to emails and using Facebook, but not to read a novel," she said. Books also receive help when it comes to staving off the digital deluge. There are no sales taxes on books, notable in a country where most products get 21 percent slapped on top of the sticker price. And heavy import taxes on books, and electronics such as e-readers, help keep the local printing industry strong. While Argentines are increasingly glued to their mobile devices, customers who want to use foreign retailers like Amazon have to pay a 35 percent surcharge on their peso-denominated credit cards. The use of e-readers like the Kindle is still relatively low. Less than 10 percent of the 1.2 million people who attended the city's annual book fair last year said they used electronic devices to read books, according to a fair survey.