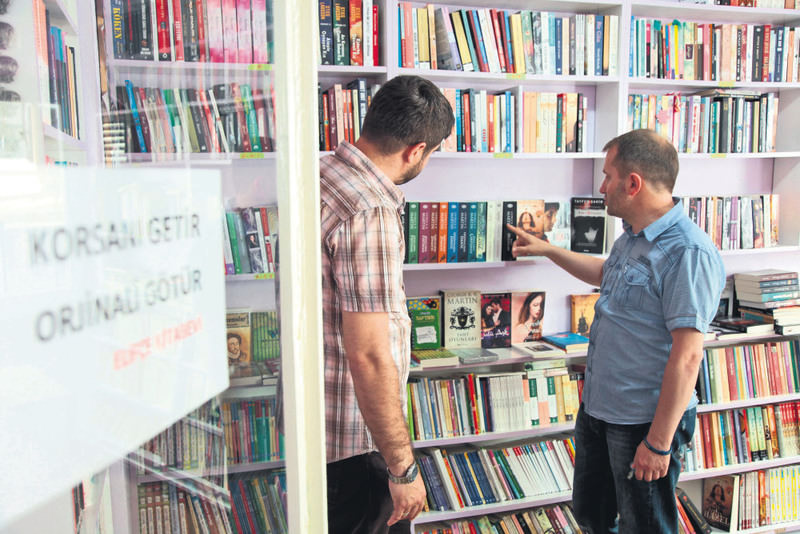 by Daily Sabah with AA May 26, 2015 12:00 am
Tayfun Şahin, an author and bookstore owner in the northwestern province of Tekirdağ, has launched a campaign against pirated books. Şahin has promised to give his customers the original books as a present in return for a signed paper saying where they purchased the pirated books from. Şahin hung the motto of his campaign - "Bring the Pirated Book and Take the Original Book" - on the windows of his store.

In his statement to Anadolu Agency, Şahin said that he has always been against pirated books and he purchased as many original books as possible long before he was an author and bookstore owner.

He said that pirated books rob the rights of writers, printing houses and workers as well as the state. Şahin said, "I first saw pirated publications in Istanbul, as it is a big city. It is hard for someone to fight against it on his own in Istanbul. Then I came to Tekirdağ. In time, the number of pirated books around the market declined; however, I later learnt that people are still selling them in secret." He said he decided to launch a campaign against pirated books. "If you are sure that the book you bought is pirated, I will give you the original copy without asking for a fee. Moreover, I will gift you a book that you like. All I want to learn is the place that they bought the pirated books from."

Şahin said pirated publishing violates the law and stressed that pirated books infringe on writers' rights. He said, "It is not enough to see the place where pirated publications are sold" hence he has asked for a signed piece of paper from his customers to report these places to the authorities. "Pirated books also feature authentication stamps. The best way to detect a pirated book is its price and quality." He said pirated books are usually cheap and their printing is of bad quality. "Eighty percent of people do not know they are reading pirated books. I want to plant this idea in to future generations," Şahin concluded.
RELATED TOPICS