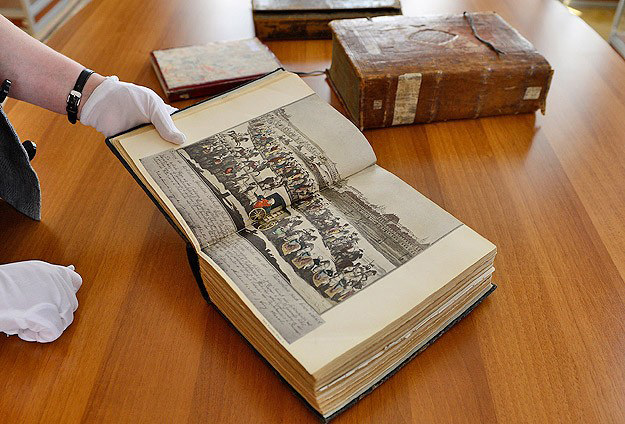 by Anadolu Agency Aug 25, 2015 12:00 am
Russia's state library stands out with rare pieces of Turkish literature, some of which are the first examples of Turkey's rich literary scene. The collection includes some notes and signatures of senior statesmen from the Ottoman Empire and the early years of the Republic concerning certain historical incidents. The literature collection's history dates back to 1828, the opening-year of the Russian library.

Kept in the library's Eastern Civilizations Center, the collection features 16 of 17 publications that were the first books published in the Ottoman Empire. Some books were presented as a gift to Russia in those years. As one of the library's richest sections, the collection currently includes 15,000 books, 17,500 magazines and an archive featuring old newspapers. There is also a two-volume Arabic-Ottoman dictionary, which only saw 1,000 copies published in 1729 by İbrahim Muteferrika. It was written by İsmail el-Cevheri and was translated in the 16th century by Mudarris Mehmed bin Mustafa el-Vani, who was known as Vankulu Mehmet Efendi among the public.

Aside from being the first published book, the dictionary attracted great interest and was bought by many people. It was seen as a reference guide by the period's intellectuals as well. Another book in the library collection is "Tarih-i Hind-i Garbi" (History of the West Indies), written by Emir Muhammed bin Hasan-ül Mes'udi. The rare piece was the first illustrated book published in a Muslim country. It is still unknown how the book was published by İbrahim Muteferrika because religious practices forbade illustrations, but the book was embellished with human and animal figures. Ottoman scholar Katip Çelebi's "Cihannüma" (Universal Geography) is among the collection's most important pieces. Although the original copy does not include any illustrations, the book, which was presented to imperial Russia, has many hand-written maps and images. The collection will be enriched with the contributions of the Culture and Tourism Ministry and Turkey's Embassy in Moscow.
RELATED TOPICS