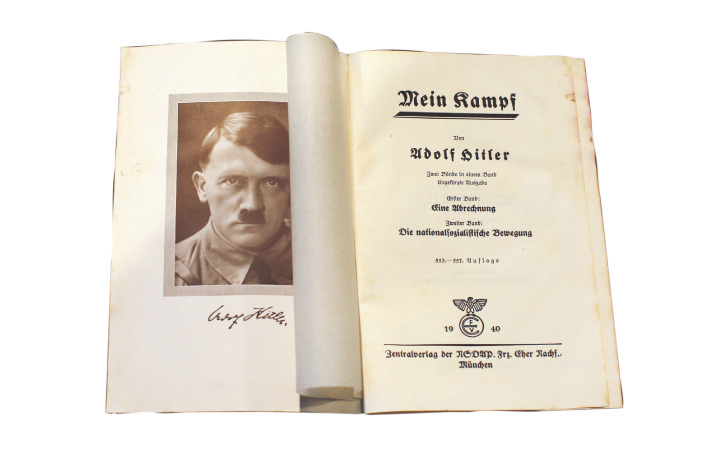 The copyright of Hitler's "Mein Kampf" expires today, with plans by several publishers for annotated reprints, sparking fierce debate over how one of the world's most controversial books should be treated seven decades after the defeat of the Nazis

The southern German state of Bavaria was handed the copyright of Adolf Hitler's book "Mein Kampf" in 1945 when the Allies gave it control of the main Nazi publishing house. For 70 years, it refused to allow the anti-Semitic manifesto to be republished out of respect for the victims of the Nazis and to prevent incitement of hatred. But "Mein Kampf," which means "My Struggle," falls into the public domain on Jan. 1, meaning that the state of Bavaria can no longer challenge reproductions or translations of the inflammatory work.

For several European countries that were under Nazi occupation, including Austria and the Netherlands, the expiration of copyright will have little impact as reprints and sales of Hitler's diatribe remain banned there. But in Germany, historians have readied an annotated version to hit the bookstores on Jan. 8, while in neighboring France, publisher Fayard will go ahead with a new French version, sparking chagrin in some quarters. Some scholars argue in favor of the reprints, saying they will serve to demystify the notorious 800-page document, particularly given that the tract is freely available in many parts of the world, and just a few clicks away on the Internet. In India and Brazil, the book is easily found, while in Japan even a manga version of the tract is available. In Turkey, more than 30,000 copies have been sold since 2004, and the book is not prohibited in the United States. Nevertheless, opinion is split, particularly among Jewish groups, some of which want a ban maintained, while others see reason in a scholarly version being made available for educational purposes.

No country is as torn over the book as Germany where all reprints have been halted since 1945, although sale and possession of the book is not banned. Partly autobiographical, "Mein Kampf" outlines Adolf Hitler's ideology that formed the basis for Nazism. He wrote it in 1924, while he was imprisoned in Bavaria for treason after his failed beer hall putsch. The book set out two ideas that he put into practice as Germany's leader going into World War II: annexing neighboring countries to gain "lebensraum" or "living space" for Germans; and his hatred of Jews, which led to the Holocaust. Some 12.4 million copies were published in Germany until 1945, and copies can be found in academic libraries. Germany's Jewish community leader Josef Schuster said, "The despicable propaganda pamphlet 'Mein Kampf' should remain banned" although he did not oppose a scholarly version with explanations for educational and research purposes. Such an annotated version is what historians at the Institute of Contemporary History of Munich (IFZ) have prepared. The IFZ version, running to 2,000 pages in two volumes, including the added commentary, has been in the works since 2009 and aims to "deconstruct and put into context Hitler's writing. "The book, to retail at 59 euros ($65) from Jan. 8, will look at key historical questions, the institute said, including: "How were his theses conceived? What objectives did he have? And most important: Which counterarguments do we have, given our knowledge today of the countless claims, lies and assertions of Hitler?"

Education Minister Johanna Wanka has argued that such a scholarly version should be introduced to all classrooms across Germany, saying it would serve to ensure that "Hitler's comments do not remain unchallenged." "Pupils will have questions, and it is only right that these can be addressed in classes," she said. But Charlotte Knobloch, who is president of the Jewish community in Munich and Upper Bavaria, warned that even this version carries certain risks as it "contains the original text" and that it was also "in the interest of right wing militants and Islamists to spread these ideas." To these fears, Andreas Wirshing, the IFZ's director, argued that each passage of the original text is accompanied by a commentary, forcing readers "to notice the commentaries and take them into account." "Any Hitler sympathizers who might be interested in the book are better off looking elsewhere," he said in an interview with Deutsche Welle.

In neighboring France, the president of the council of Jewish institutions, Roger Cukierman, called the planned French reprints "a disaster." "Such horror can already be found on the Internet. What would happen if 'Mein Kampf' also becomes bedside reading?" he asked. In Israel, where reprints have been banned, the expiration of copyright would not lift a deep-seated taboo against the anti-Semitic screed. Murray Greenfield, founder of Gefen Publishing, which focuses on books about Judaism and its history, said he wouldn't publish it "even if they paid me."
RELATED TOPICS