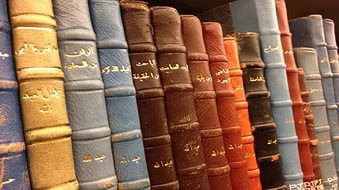 by daily sabah Jan 22, 2016 12:00 am
Believing that the roots of arts and philosophy in Turkey should be considered as a branch from the Islamic World, the Writers' Union of Turkey and the Haşimi Publishing House have organized an Arabic Book Fair. The book fair will host publishing houses from various countries including Turkey, Syria, Saudi Arabia, Lebanon, Jordan, Morocco and Kuwait, and is expected to welcome over 10,000 bookworms interested in Arabic literature.

The fair will also host a cultural festival for visitors as well as authors participating in the event; the latter include Yusuf Kaplan, Bedri Gencer, Ebubekir Sifil, Kamil Büyüker, Ahmet Turan Arslan, Cahit Baltacı, Kemal Yıldız, Ali Sözer, İbrahim Aydemir, Sariye Rifai and Kureyyim Racih. The Semerkand Publishing Group is one of Turkey's leading publishing houses and will be present at the Arabic Book Fair. Speaking to the press, the Semerkand's manager Cezmi Akgül said many books and documents about Islam, Turkish history and culture were written in Arabic and Farsi.

"According to us, Arabic, Farsi and Kurdish were never considered foreign languages, as these languages lived side-by-side with Turkish," said Akgül. He claimed that these sister languages should mingle once again, in order for the rest of the world to utilize knowledge about Muslim heritage and for Muslims to realize the importance of their own culture. Akgül said that hosting a book fair for Arabic publications is necessary for Turkey, as the country hosts millions of Syrians and there are a growing number of Turkey-based publishing houses that attend book fairs in Muslim countries each year. The Haşimi Publishing House, which protects the heritage of the Turkish people with publications in Arabic, Kurdish and Farsi - as well as madrasah classics - attends various book fairs annually in Irbil, Doha, Cairo, Beirut and Tehran and attracts widespread attention.
RELATED TOPICS