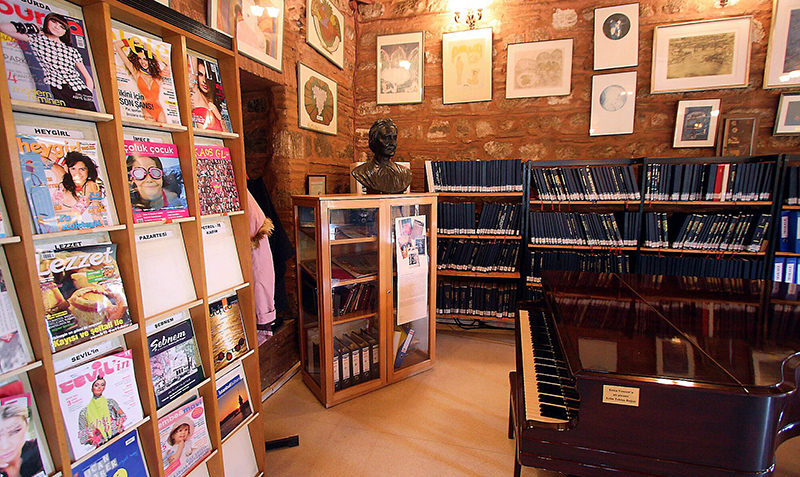 | Sabah Photo
by Anadolu Agency Feb 22, 2016 12:00 am
It is a quiet Friday afternoon in Turkey's only women's library and Fatmagül Berktay-a renowned feminist academic and activist-is, as usual, hunched over a pile of books.

However, she is not grading papers or doing research; she is signing books from her personal archive to donate to this unique and venerable institution.

Berktay-a professor of political science at Istanbul University and the writer of many books on women's issues in Turkey-is chair of the executive board of Kadın Eserleri Kütüphanesi ve Bilgi Merkezi Vakfı [Women's Library and Information Center Foundation].

A renovated Byzantine-era building closely linked to the Fener district's Greek community, the library was once a female school connected to a nearby monastery on the banks of Istanbul's Golden Horn.

After going into decline, the building is now home to this special library founded in 1990 by five Turkish women.

Having prevailed against the odds, Turkey's largest women's archive and library is now looking for new ways to expand and fund itself after a 2015 campaign where donors could contribute a modest 25 Turkish liras [$8].

"We remain standing [only] with donations," Berktay tells Anadolu Agency, speaking in the meeting hall of the library's second floor where, despite a pleasant and quiet atmosphere, old and out-of-date PCs are still used to keep records.

The room's walls are decorated with paintings and sculptures donated by Turkish feminist artists.

Some other objects in the hall are a typewriter that belonged to Kerime Nadir, Turkey's best-selling female writer who published more than 40 blockbusting books, plus a painting by Mihti Musfik Hanim, one of the first and most-renowned Turkish female artists.

The library-which forms an important part of Turkey's women's memory with its unique archive-hosts more than 12,000 books, over 400 magazines and 10,000 periodicals as well as more than 5,000 articles plus 526 post-graduate and doctoral theses.

The oldest piece at the library is a Greek-language women's magazine called Kypsela that dates back to 1943, Berktay says.

According to Berktay, the library's creation was sparked by a women's movement which developed during 1980s Turkey when a military coup overthrew the elected government.

"We were all part of this movement," she says, adding: "Through the 80's women's movement we discovered both our ties with the Ottoman women's movement and the rising second wave of feminism around the world."

"All those things [opening of the library and foundation of a women's ministry in Turkey's government] were not just coincidences; the women's movement in the world and in Turkey were behind it," she says.

For Berktay, the importance of the library's collection is to create a "women's memory" in Turkey.

"Women and men are the ones who create history but because history is not written by women, they are not mentioned?," she says. "A special effort is needed to reveal women's history.

"The library documents not only the fight of the Turkish women's movement but also women's struggle to become individuals in the country and build a bridge between the past and the future," she says.

Berktay says that women living in the Ottoman Empire during the 1910s would "openly call themselves 'feminist'.

"They were saying feminism is a highly respected movement and men and women who have reached maturity should become feminist'", Berktay adds.

In 1913 women demanded their voting rights, she says: "They wanted to watch parliamentary meetings and were dreaming about having voting rights one day.

"They were saying If you do not give our voting rights, we will chain ourselves like British suffragettes in front of the parliament building," she adds.

'Suffragette' is a term used to describe members of a women's organization, mainly in the U.K., which fought for females' right to vote in the late 19th and early 20th centuries.

"It is so obvious that [Ottoman-era feminists] were in contact," with like-minded women around the world, says Berktay.

Berktay says that when the 100th anniversary of the Gelibolu [Gallipoli] war happened last year, the commemoration was of modern Turkey's foundation.

"Nobody mentioned women," during the celebrations, she says, giving an example of a nurse called Safiye Huseyin Elbi who worked for the Ottoman army in Canakkale, where much of the fighting took place.

The library now has both Elbi's school diploma and her passport for posterity.

For Berktay, another very important job the library has done so far is to translate Ottoman-language women's magazines into modern Turkish.

Although the library will in April mark 25 years since its foundation, plans are already afoot to preserve and expand its valuable collections.

Berktay says the library' is expected to fully digitize its archive this year.
Last Update: Feb 22, 2016 11:09 am
RELATED TOPICS