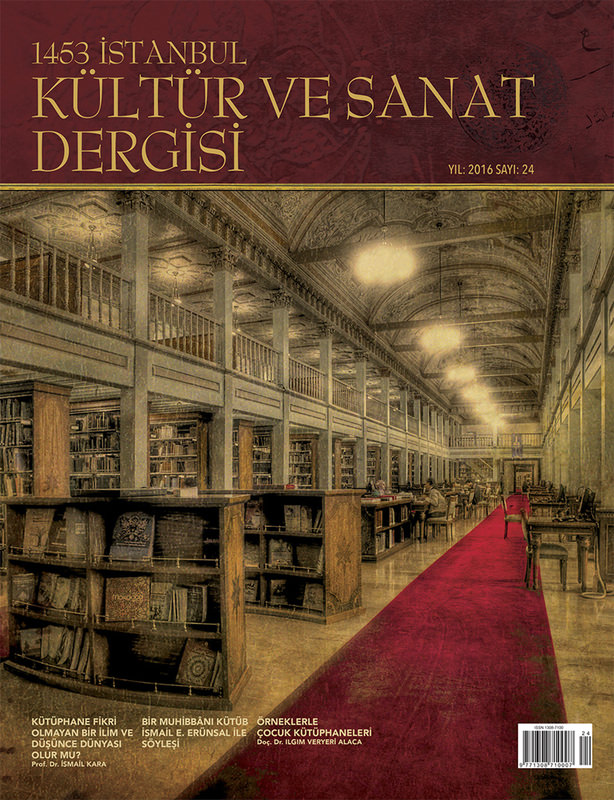 In parallel with the the 52nd Library Week celebrated in Turkey for a week starting on the last Monday of every March, 1453 Culture and Arts magazine put Ottoman sultanas' services to libraries and archive systems under the microscope

"1453 Culture and Art Magazine," which is among the publications of the Istanbul Metropolitan Municipality's cultural enterprise Kültür A.Ş., features the libraries that were founded by bookworm Ottoman sultanas in its latest issue that celebrates the 52nd Library Week. The special Library Week issue was edited by researcher and writer Emre Erkorkmaz and explores the architectural features, the reasons for their establishment and the richness of their inventory along with their history. These libraries that were established by powerful Ottoman sultanas left their mark on the cultural texture of the cities in which they resided. Among notable Ottoman women who made a name for themselves in the cultural scene, the following stand out: Nurbanu Sultan, who was the first woman to begin the librarianship tradition, Kösem Sultan, who is considered the most powerful female figure of the stagnation period of the Ottoman Empire, Hatice Turhan Sultan, who emerged victorious from the power struggle she was involved in with Kösem Sultan, Gülnûş Emetullah Valide Sultan, who was in possession of a large collection of books with her libraries located in Galata, Üsküdar and Chios, and Pertev Nihal Valide Sultan, who is known as the most philanthropist sultana of the last period of the Ottoman Empire as she donated almost 1,000 books to the library she founded.

According to the information provided in the magazine, Nurbanu Sultan, the wife of Selim II and the daughter-in-law of Süleyman the Magnificent, began the tradition of librarianship in the empire. Nurbanu Sultan, who is believed to be of Jewish or Italian origin, gave birth to Ottoman Sultan Murad III and served as the valide sultan (mother of the emperor) in the palace when her son inherited the Ottoman throne. She had a social complex built in Üsküdar's Topbaşı area along with a madrasah (school) and a dar al-hadis, a madrasah where Prophet Muhammad's sayings are taught. She also founded a library for students. The records show that there was a librarian working at the library for a daily wage of three coins. Apart from Sultan Murad III who donated books to his mother's library, other book-lovers in the district donated books to the library over time and its collection became larger. The library was later handed over to the Üsküdar Hacı Selim Ağa Library after the madrasahs were closed as a part of the Tevhid-i Tedrisat (uniformity in education) Law, which entered into force in 1924 following the declaration of the Republic of Turkey.

Another book-loving Ottoman sultana was Hatice Turhan Sultan, who was of Russian origin, and managed to came out victorious from the power struggle she engage in with Kösem Sultan, who is referred to as the most powerful female figure of the Stagnation Period of the Ottoman Empire. Hatice Turkan Sultan was enslaved by Crimean Tatars at a very young age and brought to Istanbul. She was presented at first to Kösem Sultan and then Kösem's son İbrahim as a concubine. Hatice Turhan Sultan's fame shone when she gave birth to Shehzade Mehmed while the Ottoman dynasty struggled with the lack of male heir. She completed the construction of the mosque in Eminönü whose foundation was laid by Safiye Sultan but whose construction stopped when her son Mehmed III passed away in 1603. The mosque, which is known as Yeni Camii (New Mosque) today, was donated more than 300 handwritten books by Hatice Turhan Sultan. These books were later transferred to a building next to the Tomb of Hatice Turhan Sultan during the reign of Ahmed III and cataloged in 1711 and 1826. It is known that these handwritten books were handed over to the Süleymaniye Library in 1918. Hatice Turhan Sultan was very careful about her books and made certain requests to the librarian who guards her books. She asked the librarians to report whenever something unwanted happened to the books in the library. According to documents dating back 1662 and 1663, the librarian who was responsible for Hatice Turhan Sultan's books collected the receipts of the books that were lent and keep meticulous records in a book.

Counting the pages and registering to which subject the books belong was among the many duties of the Ottoman librarians. Before lending a book from the library, the librarians conducted a background check on the people who wanted to borrow the books. Thus, the library catalog that was prepared in 1711 clearly demonstrates which books went missing and under whose watch they went missing. Hence, it can be assumed that some of the pages of the books were stolen, and some books were not returned to the library by the people who borrowed them. Hatice Turhan Sultan also appointed a bookbinder to repair or renew the covers of the books.
RELATED TOPICS