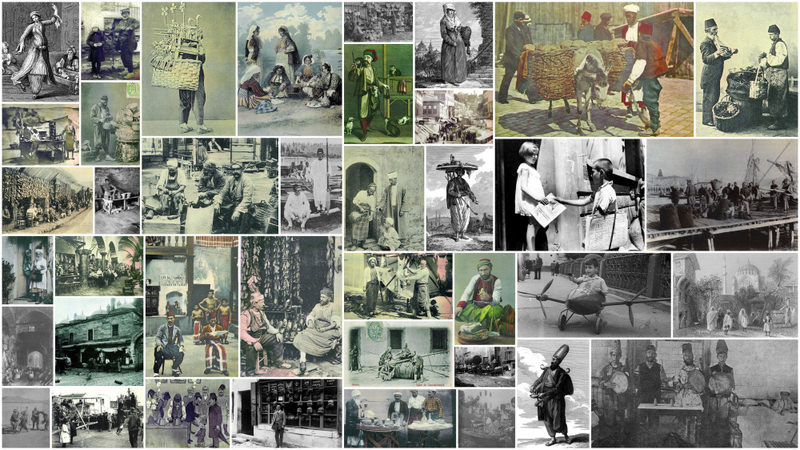 Built over a long urban history, the metropolis of Istanbul had unique occupations and tradesmen rarely found today or completely gone from the streets

The Istanbul Metropolitan Municipality's cultural enterprise, Kültür A.Ş, sheds light on the tradesmen of Istanbul, who are an important part of the history and cultural identity of the city, with its new publication "The 100 Tradesmen of Istanbul." The book, which was prepared for publication by researcher and writer Uğur Aktaş, features tradesmen that still operate in Istanbul along with rare and nearly extinct tradesmen and peddlers. 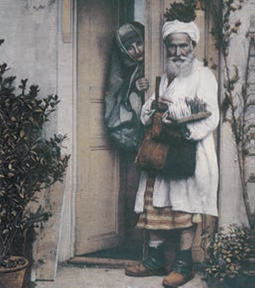 The book paints an overview of Istanbul's tradesmen and offers a general picture of the city itself. The book features storytellers whose poems and stories were printed and sold on the streets of Istanbul along with Boza sellers who stand in the streets until midnight shouting for potential customers as well as operators of mobile chair swings.

Pottery and butchers in Eyüp and Yedikule

According to "The 100 Tradesmen of Istanbul," the tradesmen of Turkey's most populous city operated primarily in the districts of Beyazıt, Süleymaniye, Eminönü, Mahmutpaşa and Tahtakale during the Ottoman era - comparable to the commercial areas of Istanbul during the Byzantine era.The book also sheds light on the history of the Grand Bazaar, which was considered a center for Istanbul's tradesmen, with 35 of its 60 streets bearing the names of various tradesmen.

Other districts that hosted tradesmen and craftsmen include Beyoğlu, Eyüp and Üsküdar - three districts outside the city walls after the conquest of Istanbul by Ottoman Sultan Mehmed the Conqueror. Pottery craftsmen and toy-makers flourished in Eyüp, while butchers and the leather trade took root in the districts of Yedikule and Kazlıçeşme.

Byzantines who cannot own a shop

Tradesmen and craftsmen in the Byzantine Empire could barely afford to buy the shops where they did business, operating as tenants in those buildings. Churches and foundations owned most shops in the city, with roughly 1,500 shops near Hagia Sophia designated to cover the funeral costs for poor families.

During the time of the Ottoman Empire, if a man was not registered with the army, he was most likely registered with a trade guild. These guilds held an important place in both trade and social life. First, tradesmen were registered as apprentices at first, and the guild met their professional needs. Each guild had a solidarity fund, and money collected from individual members was put in this fund. Tradesmen who fell on hard times were able to take out loans from this fund, along with money for funeral and wedding expenses if necessary.

Whenrolling papers became popular, the making of mouthpieces became a craft in its own right, becoming a widespread commodity during the reign of Sultan Abdülaziz. Istanbulites who previously smoked tobacco using a pipe were now able to use mouthpieces, also referred to as cigarette holders or "a team," and craftsmen who previously worked on pipes could now make these. Mouthpieces were much easier to carry than pipes and quickly became widely popular. Mouthpiece makers were concentrated near the present-day Sahaflar Çarşısı (used book bazaar). Today, there are only a few mouthpiece makers still practicing this craft - on Uzunçarşı Avenue and Ağızlıkçılar Street, which means mouthpiece makers in Turkish. The mouthpiece is made of wood from aromatic plants such as rose, cherry and jasmine, as well as stones such as meerschaum, jet, amber and agate. Moreover, for wealthy businessmen and heavy tobacco users, mouthpieces were made of gold or silver and are now considered antiques.

The daily use of carts became popular in the wake of the Tanzimat, a series of political reforms in the Ottoman Empire in 1839. This shift increased in popularity following the abolishment of the Janissaries; however, interest in carts quickly turned into an obsession during the reign of Sultan Abdülmecid. In particular, women in the palace were so interested in touring the city in carts that Sultan Abdülmecid was known to have all the carts chained in order to prevent women from driving them.

Seekers operated under the command of their chief officer, wandering around the city for garbage, collecting debris and discarded items that they could use to make money; namely, copper, iron, fabric and nails. These craftsmen saw the most profit in areas that eventually caught fire. Right after a fire was extinguished, seekers were assigned to clear the area, removing debris in hopes of finding something valuable under the walls. According to Evliya Çelebi, there were 500 seekers in Istanbul during the mid-17th century, and chief officers received 60,000 silver coins in 1638. According to Çelebi, seekers wore boots, black and red kaftans and conical hats or caps to cover their ears.

Scriveners wrote petitions for those who wanted to apply to the sultan or the grand vizier, adhering to the specific spelling rules and patterns that were used. It was important for scriveners to know where these petitions were going to be used. Moreover, scriveners were expected to use phrases both in Arabic and Farsi and memorize certain sentence patterns. As retired clerks usually had these skills, most scriveners were typically retired clerks.

Bear dancers took cubs while they were still small and conditioned them to the sound of a tambourine by burning their feet. Bears wore a ring through their nose to control them and the nails on their claws were trimmed to prevent injuries.

Entertainers ("dal kavuk" in old Turkish) visited houses to entertain families and their guests by telling stories and making jokes. Like other tradesmen and craftsmen, entertainers had their own guilds and pre-determined prices according to the types of jokes they made.

The center of the slave trade in Istanbul was the Old Bedesten (Covered Bazaar) and the New Bedesten since the time of the Byzantine Empire. Concubines were sold in the Old Bedesten, while male slaves were sold in the New Bedesten. Slaves were usually sold at a set price, but sometimes buyers would drive a hard bargain with the slave trader. The prices of the slaves varied according to their features. Youth and beauty were the primary features that most buyers were looking for. Female slaves were expected to know how to play an instrument, clean a house and speak other languages, while male slaves were expected to have basic knowledge of iron forging, sailing and animal sitting.

One of the biggest forms of entertainment for women in old Istanbul who spent most of their lives indoors was visiting a fortuneteller. Almost every neighborhood had a good fortuneteller, and women would come together and have their fortunes told in turns via Turkish coffee cups.

People who collected goods that hit the shore after a strong wind or a lodos (the strong south-westerly wind that blows episodically in the Aegean Sea and Marmara Sea) were called lodos catchers. These people tried to sell the things that they found for a good price. Lodos catching was a family business, and families in this line of business belonged to this district. Lodos catchers wore high boots up to their waist and carried griddles.

One of the biggest features that distinguished putty makers from other tradesmen was the fact that they sold their products in a musical environment. Putty makers wandered around the city with a small band and tried to lure customers to their stalls.

Hookah tubes were usually produced in the Marpuççular Bazaar near the Spice Bazaar in Old Istanbul. Leathers in many colors were cut into strips with special knives and were wrapped around iron sticks, ornamented with the help of fine wire. After the leather dried, it was taken out of the iron stick, resulting in a hookah tube that was unique to Istanbul.

Bath attendants in the Ottoman Empire were usually Albanian dependents placed in charge of lathering up customers with soap and helping them bathe. To stand out, Turkish bath attendants wore special black waistcloths and carried bath gloves, aromatic soaps and a knife sharpener. According to Çelebi, there were 2,000 bath attendants in Istanbul in the middle of the 17th century.
RELATED TOPICS